(4 Stars) A technical masterpiece that overwhelms the story. 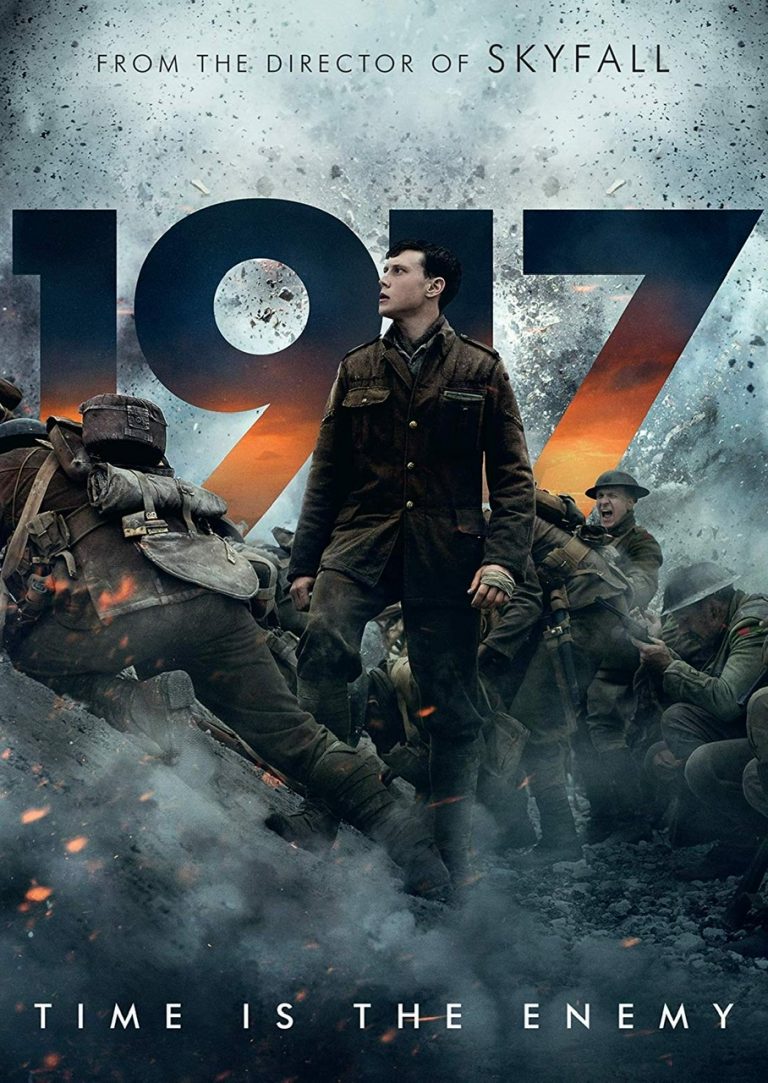 There’s a scene about two thirds of the way through the movie where Schofield, one of the two main characters, is swept down a river and over a waterfall that may not be Niagara, but is still considerable in height.  Falling over that waterfall would have to have a pretty strong effect on our character – viewers should certainly be concerned about Schofield’s health. Did he survive the fall? How badly hurt was he?  Will he be able to continue his critical mission?

And yet, those were not my immediate questions.  Instead of thinking about the story and how that waterfall scene would impact it, my first questions were ‘How did they do that?’  How could they possibly have filmed such a thing in such a remarkable fashion?  How could the camera be positioned in such a way as to have captured that sequence so perfectly?

And there, in a nutshell, is the problem with 1917.  This movie is a technical masterpiece that ultimately is more concerned about how it told the story than what it was actually saying to the viewer.

There is little doubt about its technical talents.  The movie received ten Oscar nominations, tying with The Irishman, and Once Upon a Time in Hollywood and just behind Joker (with 11).  Seven of those ten nominations were in the technical arts and sciences, or what I call ‘below-the-line’ categories.  And it won three Oscars, one less than this year’s big winner, Parasite.  Although, unlike Parasite, all of 1917’s Oscars were in ‘below-the-line’ categories – Cinematography, Visual Effects, and Sound Mixing.

Also like Joker, the audience rating for 1917 places this movie at a much higher ranking than the critics did.  Audiences rated it sixth out of the thirty eight movies, while the Critic MetaScore places it squarely in the middle.  In my Joker review, I sided with the audiences and thought the critics missed the boat.  This time, though, I think the critics didn’t allow the visual and aural stimulation to overwhelm their evaluation of the story, while the box office paying movie audiences were strongly influenced by the movie magic, to the tune of $368 million worldwide.

There is so much to like on the technical side.  Roger Deakins won his second cinematography Oscar for this movie.   He won his first Oscar for the very unusual filming in Blade Runner 2049, but was nominated thirteen times before that for movies ranging from Sicario, Skyfall, and Prisoners and going back to Shawshank Redemption (1994).  Deakins is considered a grand master in the field and  shot 1917 almost entirely with a single  40mm lens.  Couple the consistent perspective with the illusion of a single take, and you have one of the ways the movie sustains its tension and interest.  Although it is difficult to describe the horrific war scenes as ‘beautiful’, Deakins cinematography captures the contrasts that make a war movie work.

One of the most stunning scenes in the movie happens at night in a French town that has been torched by the retreating Germans.  To create these visual effects the Production Design team created what is thought to be the largest lighting bank ever used in a movie.  Then the Visual Effects team took megawatts of lights and turned them into the flickering flames of a huge fire.  For this, and other similar work, the team won the Oscar in that category.  Members of this team have been nominated and won Oscars for the effects in Life of Pi, several of the Star Wars movies, and the Harry Potter series.  Again, the movie used seasoned veterans.

The movie was nominated in all three sound categories, and took home the Sound Mixing Oscar.  Most war movies present a cacophony of sounds, making it difficult to distinguish the dialog.  In this movie, perhaps because the horrors of war are more often displayed after they have occurred, than during, the speaking parts are unusually distinct.  Although dialog is not the reason to see this movie, some of the exchanges between the two protagonists are important.  War movies usually win in the Sound Editing category, but this year the Oscar went to the car racing movie, Ford v Ferrari.  Nonetheless, the sounds of war are plentiful here, even though they take a backseat to the main thrust of the movie.  Composer Thomas Newman earned a well deserved Oscar nomination for his score which articulates a delicate balance between the tension of the mission and the underlying despair behind the loss of so much life.  This is Newman’s 15th Oscar nomination, but he has never won.

The point of all this is that this is an overwhelming technical accomplishment – probably the most advanced movie of the year and deserving of the recognition it has gained.  But, as I have argued in many other reviews, technical accomplishment should never overwhelm the telling of the story.  The ‘below-the-line’ skills are all best utilized when they are in service to the drama; they must always be secondary to the characters and the message of the movie.  In 1917, the story gets lost behind the delectable morsels of its delivery.

The film did earn two ‘above-the-line’ nominations (in addition to Best Picture), for direction and original screenplay, both by Sam Mendes.  Mendes won the directing Oscar twenty years ago for American Beauty, which was a penetrating look at the eccentricities of American culture.  (Mendes is British but has always been interested in America.)  He also directed Revolutionary Road and Road to Perdition, in addition to a couple of the recent James Bond movies.  This is his first attempt at a movie script and, honestly, it shows – there really aren’t any truly memorable lines in this movie.

Purposely, Mendes chose two relatively unknown, and young, British actors to play the leads.  (There are minor, almost cameo roles, by other big-name British actors.)  He reportedly said that he didn’t want big names to distract from the story.  Indeed, the youth and naïveté of George MacKay and Dean Charles Chapman serve them well in their roles as fodder for the horrors of World War I.  But there is nothing particularly outstanding about their roles either – they do what young soldiers everywhere have done, obey orders, and risk their lives in service to some poorly understood reason.  The movie is inspired by, but not actually based on, real life experiences of Mendes’s grandfather, Alfred Mendes, a West Indian writer who served in the British army.  Perhaps a more compelling script could have been written if Mendes had actually focused more on his own grandfather.

In the end, though, I came away from the movie in sheer awe of the movie-making skills, but not with a good sense of the characters nor their impossible mission.  A good movie is supposed to generate genuine emotions of empathy for the characters and questions about their lives.  It is not supposed to make you ask, repeatedly, ‘How did they do that?’.

This movie is similar to Joker in the number and kinds of Oscar nominations it earned.  It is also similar in how audiences (loved both) and critics (not so much) reacted.  In the case of Joker, which had a lot of technical nominations, it also had an amazing, Oscar winning, performance by Joaquin Phoenix.  1917 lacked both such a character and a compelling script.  I disagreed with the critics in their appraisal of Joker – it succeeds in establishing a character, and a story that you just can’t ignore, even if its one you would rather not hear.  Yes it had some outstanding below-the-line accomplishments (like the music), but the movie was balanced between the story being told and how it told it.  With 1917, the emphasis was just too much on the ‘how’ and not the ‘what’ – I have to agree with the critics on this one, and can only give it 3.5 (maybe 4) stars. 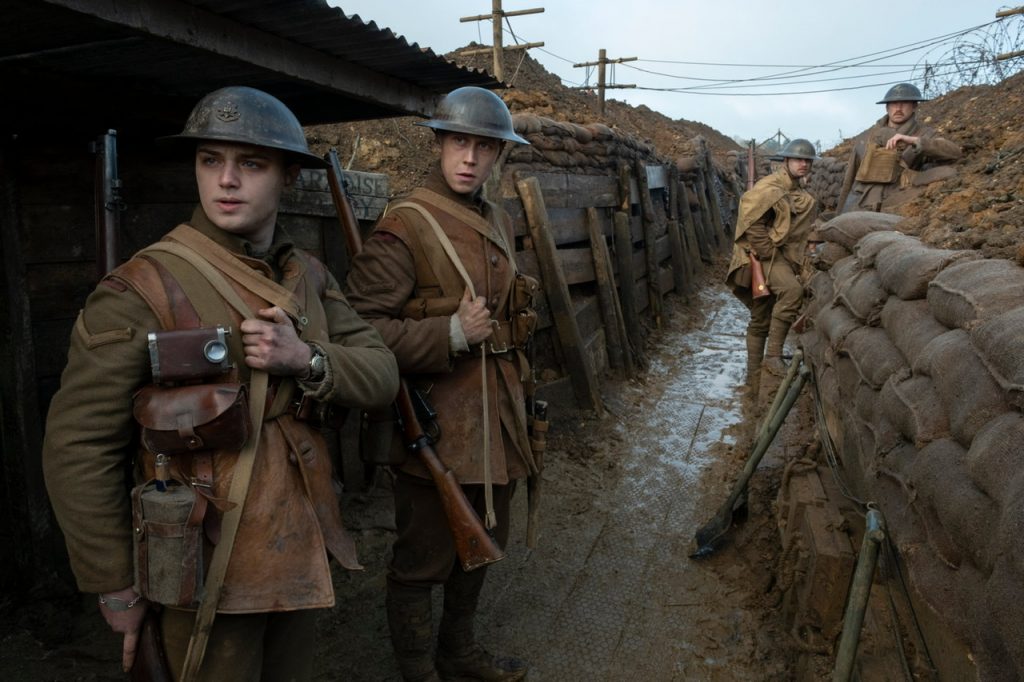