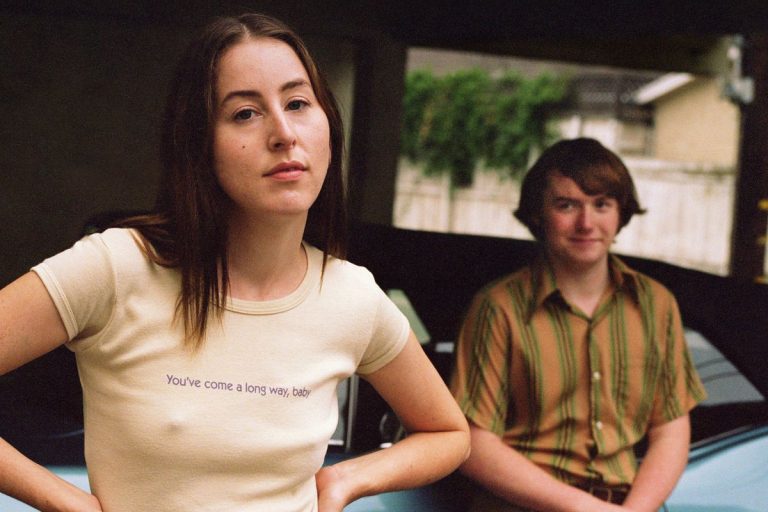 Let’s start with the name: Licorice Pizza.  Like me, you might not have known that this is a name for a Long Playing, LP, vinyl record – black (licorice), flat and round (pizza).  I didn’t know that and, if it’s explained in the movie, I missed it there too.  It is also the name of a small, Southern California-based, chain of record stores during the early 1970s that was later bought out by Sam Goody’s.  Although I went to junior high in the San Fernando Valley during the mid-sixties, I wasn’t aware of that either.

And those little missed clues sort of get at the entire problem of this film – in too many places it feels like a string of inside jokes.  The film is an overworked litany of references to people, places, and events that just aren’t going to connect to a whole lot of people.

The director and screenwriter, Paul Thomas Anderson, was born in the San Fernando Valley, and we might take this film as a sort of memoir and a tribute to his past.  But, although he was born in the place where the film is set, he was only three years old when the events of 1973 were occurring, so this can’t be something that he remembers in any sense of the word – his recreation of the times and the place are as much a fiction as any other period drama.  And that means that his work must meet the same standards as any other ‘period’ film, and I’m not sure it does.  I would have been 22 years old in 1973, about the same age as the main character and, although I remember the oil crisis clearly, my world seemed a whole lot different than what was portrayed.

Perhaps my biggest concern with the film, is that there are just too many inside references to the Hollywood community.  In so many ways, this movie felt about the same as Once Upon a Time…in Hollywood, which I felt was a film from and about the movie world leaving people outside that world doing a lot of head scratching.  Now I get that Southern California was, and is,  a world intimate with the film industry (I took my mandatory junior high film set trip and met Robert Vaughn and David McCallum on the set of Man From UNCLE.), but there is more to the world than Los Angeles, and this film seems too parochial to rate well beyond people who grew up in The Valley.

And this is surprising coming from Paul Thomas Anderson, who was the film’s writer and director and who, apparently, nursed this idea for years before bringing it to the screen during the pandemic.  Anderson has a notable Oscar presence having received eight other Oscar nominations as writer, director and/or producer for films like There Will Be Blood, Boogie Nights, Inherent Vice, Magnolia, and Phantom Thread.  Although none of these efforts garnered a win for him, all five of those films are wonderfully crafted contributions to the art form.

In Licorice Pizza, Anderson seems to have taken it upon himself to pay homage to his industry.  He does that with multiple references to Hollywood history, that end up nearly tripping over themselves.  Bradley Cooper, for example, plays a brief, but important role as Jon Peters, at the time Barbara Streisand’s partner/manager.  Cooper and Streisand both played in two different versions of A Star is Born, which itself is a movie about yet another Hollywood couple.  And Sean Penn plays a, mostly drunk, Jack Holden (another actor) who impersonates yet another actor on a motor cycle impersonating Evel Knievel.  The name-dropping just goes on and on. Some of that can be a little fun, but when the entire movie gets wrapped up in these contortions, then you know it has pretty much gone off the rails.

And that is a shame, because there are some wonderful aspects to this movie.  The singular standout has to be the breakout performance from Alana Haim, the youngest member of the band Haim.  Here she plays a young woman in her mid-twenties who is struggling to find her way in life.  Initially, she works as an assistant to a photographer who takes school pictures.  She is romantically unattached and there is nothing to suggest she ever was.  She lives at home with her parents and her two older sisters (played by her real-life family, including her two sisters from the same band.). For reasons that aren’t real clear, she becomes attracted to a fifteen year old who definitely does not act like a fifteen year old and is a child actor with connections well beyond what his age suggests is even possible.  The ‘boy’ is played by Cooper Hoffman, son of Philip Seymour Hoffman, an actor Anderson also worked with before.  Hoffman does very well in his first role and you can see in him a few characteristics of his father.

But the acting surprise in this film is all for Alana Haim.  I admit up front that I know absolutely nothing about the band, Haim, that she is in with her sisters and don’t even know if I would like their music.  But her performance here is loaded with so much understated confidence that I can’t help but think we will be seeing more of her.  She isn’t overtly beautiful, but she has a certain sexiness that is irresistible.  (I admit, the 70’s miniskirts and bikinis might have something to do with that).  But even beyond that she has the timing in her lines and facial expressions suggesting high sensitivity to both comedic and dramatic moments.  We’ll be seeing more of this young actor.  (Pay attention to the extended scenes involving the delivery truck where Alana did all the driving – a feat that would be difficult to pull off even in real life.)

Another positive for the film was in the way they established the sets and settings.  The store fronts all exuded a 70s quality (remember, no internet), and it is amazing how they were able to cobble together a huge line of 70s vehicles at a gas station running out of fuel – reportedly, the most expensive scene in the movie.

The third outstanding quality of the film is the music.  Jonny Greenwood, who has worked with Anderson in the past,  received his first Oscar nomination for Phantom Thread  and received his second Oscar nod for this year’s darling, The Power of the Dog.  But the scored music isn’t the highlight of this film, but rather the more than three dozen songs from the early 70s.  As someone developing my musical tastes during that same period, I enjoyed hearing songs that, while not necessarily at the top of the charts, still sounded familiar.  But the soundtrack also suffered from the same flaws of the movie – it seems that no song was ever allowed to play through.  All of them seemed to be cut in the middle somewhere which, to me, added to the choppiness of the film.  Just as the visuals bounce you from one Hollywood reference to another, the songs, too, never develop a continuous flow.

Anderson definitely had Alana Haim in mind when he wrote this script – Alana is the main character’s name.  And this certainly shouldn’t be surprising, given that Anderson produced and directed most of the music videos the band has made.  Anderson knew Alana’s potential, and wrote a movie pretty much just for her.  And he decided to incorporate much of his own background by not only setting it in the San Fernando Valley, where he grew up, but also by saturating it with quotes from his own insular world – Hollywood..

In the end, Licorice Pizza, plays like a Long Playing music video, incorporating a mish mash of ideas reflecting Anderson’s own local world.  It is revealing, I think, that while both viewers and critics liked this film a lot (placing it in the top five or six of this year’s films), the critics liked it much more than the viewing public, and I suspect that the average audience rating will continue to decline as it gets broader exposure outside of Southern California.

The same might happen with the critics.  It is instructive that, at this point, I only found two major reviews of this film.  Christy Lemire (RogerEbert.com) wrote about this movie : “…while we may not have ended up anywhere in our wandering, we just watched the best movie of the year.”  Meanwhile, Manohla Dhargis (New York Times) differed: “These moments are cheap and stupid and add nothing to a movie that throws out a great deal to alternating scattershot and altered effect…”.  One of those reviewers was born in and now lives in Los Angeles.  The other is on the East Coast.  Can you guess which is which?

There are some fun things about this film, especially Alana Haim, but unless you are deep into the LA movie scene, a lot of this movie will fly over your head. (3.5 *)