(3.5 Stars) Documentary of young skateboarders growing up in a decaying industrial town. Much admired by both audiences and critics. 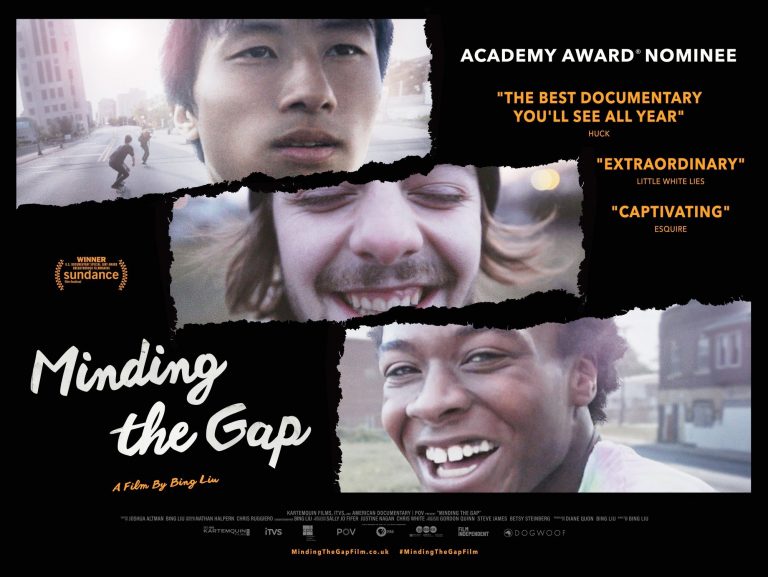 Documentary movies are not easily reviewed. And this year’s crop of Oscar-nominated movies seems to be especially difficult. Last week we looked at a very unique movie, Hale County This Evening, This Morning, which, in its perspective and style – which I compared to a cubist painting – was unlike any other movie, not just in the documentary category, but across all 37 nominated movies. The result was a movie experience that generated a great deal of controversy among my small ‘movie group’

This week’s documentary, Minding the Gap, is yet another rather different experience which, while sharing some similarities with Hale County, is still remarkably different, but, alas, equally controversial.
Whatever you think you might know about this movie, it probably isn’t accurate (unless, of course, you’ve already seen it). When I originally read the title of the movie, I assumed it was a British film and had something to do with the subway. After all, ‘Mind the Gap’ is the common refrain over the London Tube’s loudspeaker system. (That is referring of course, to the ‘gap’ between the subway car and the platform). Well, of course, it has nothing to do with subways and is centered on the rust belt town of Rockford, Illinois, geographically, and culturally a great distance from Great Britain.

If your knowledge of the film is slightly more informed – maybe you’ve seen a poster or parts of a trailer – then you know that it is about three teenage skateboarders. And you will, naturally, expect camera angles near the street line, including jumps over sidewalk curbs, skateboard ramps, and stair railings. Yes, all of that is in there and some of the sequences, filmed from the skateboarders perspective are thrilling and fun. But this is hardly a movie about the sport. In fact, aside from the fact that skateboarding is already sort of a ‘fringe group’ activity, skateboarding is mostly incidental to the main themes of the movie.

One of the skateboards has written on it “This device cures heartbreak.” Like Hale County, Minding the Gap is a movie about sustained chronic heartbreak. Like Hale County, the movie is a distillation of film captured over more than a decade. As such we follow three boys as they mature, before our eyes, into young adults.
Bing Liu is our filmmaker and a Chinese American. He has worked on at least three major films as a camera and electrical assistant, but here, manages his own film as producer, director, and cinematographer. It is him, really skateboarding, that captures the movie.

More important than the skateboarding, though, is the story he tells of himself and his two best friends, Zack and Keire over the course of twelve years. Keire is a black American who later comes to work as a dishwasher in a fast-food restaurant. He is the only one who actually turns skateboarding into something approaching a livelihood. 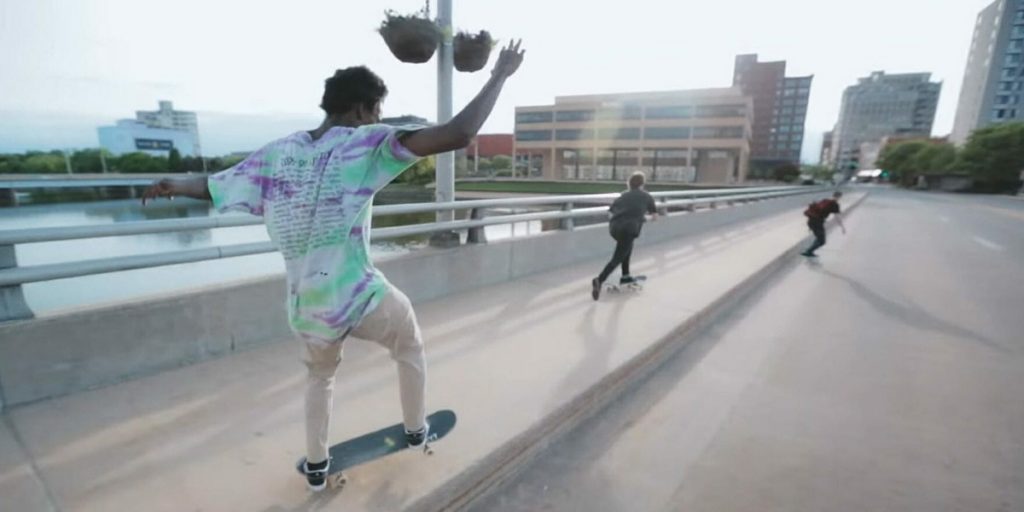 Zack is the white boy of the three and the threesome’s unofficial leader. We watch as he ends up fathering a child, at a very young age, and as he tries to merge his responsibilities as an adult with his desire for more carefree days on the skateboard.

So there is the outline of a fairly conventional movie detailing a ‘coming of age’ storyline. That it is a documentary adds some realism and extra credibility, but, as described so far, doesn’t add much more to make it stand out.

But there is much more here than just this surface description. We discover that all three of these young men are harboring some life-altering experiences. And what Bing does to bring these experiences to the surface is where the film excels. Merging elements of ‘talking head’ interviews with real-life cutaways, he paints a picture that exposes a key part of contemporary America, in a way that is both devastating and sympathetic.

I don’t want to spoil the movie by giving away what binds these young men because the way the film reveals their suffering is an important part of the experience. As Bilge Ebiri (Village Voice) wrote “…none of the boys has ever really reckoned with this dark reality in their lives. They have escaped through skating and friendship – but that kind of avoidance merely kicks the can down the road.”

Another similarity with Hale County is in how my movie group reacted compared to the general and critical ratings. Andy gave up on the movie after about ten minutes – but he is famous for hasty, but often accurate, judgments. Joan and Carolyn didn’t like the movie arguing that the men were basically unsympathetic. And yet, like Hale County, the critics loved this movie, ranking it third out of all thirty seven Oscar nominated movies, while IMDB’s audience rating placed it seventh. Once again, this is not a movie that you can approach normally.

But, I think there is an important message here – especially for men – but the message may not be easily learned. A. O. Scott (New York Times) wrote “I would not call this an optimistic movie. (The movie’s title) also suggest the possibility of self-awareness and the healing power of reflection. Mr. Liu grants his friends and himself the chance to know themselves better, to think out loud about who they are and who they might be.” Disagreeing with my wife, once again, I give this movie 3.5 stars.

PrevHale County This Morning, This Evening
Of Fathers And SonsNext