(2.5 Stars) Incredible Makeup, but the story is not coherent.

Every now and then a movie appears in the Oscar list that is a bit, or maybe, a lot, off-the-wall and just plain weird.  Interestingly, it is almost always nominated for Makeup and Hairstyling.  I guess that particular guild in the Academy likes to stir-up the pot a bit by nominating films that are a little strange.  In the 2019 Oscars, there was a film from Sweden called Border with some human-like creatures that were, sexually, very odd.  And three years before that, there was a ‘comedy’ involving a man who danced with his balls coming out of his pants and almost reaching the ground (The 100 Year Old Man Who…).

I thought this year’s candidate was going to be the Borat film with its off-centered humor.  But then I watched Pinocchio, a live-action version that is not really a very good film, but is so interesting to look at, that you can’t help but pay attention.  (OK, I watched it, but Joan got up and left).  Of course it comes from Italy which has a history of doing some strange things in the movie world (think of Fellini, Antonioni, and the spaghetti westerns of Leone).  So maybe I shouldn’t have been surprised.  But this is about as far from the Disney animated version as you can get.

I realized after researching the film, and the source material, a bit, that I don’t have a good understanding of the Pinocchio story.  Pinocchio was originally written in the mid 1800s as a magazine serial, with more than 30 chapters.  The story was apparently a morality tale designed to scare children into behaving.  It was intended to show that the big world out there was not all that nice and children needed to learn caution.  Originally Carlo Collodi, the Tuscan writer who created and developed the story, had Pinocchio killed off in a gruesome hanging.  His editors, thrilled by the story’s popular success, commissioned him to change the ending and add another dozen or so chapters, where the boy encounters many more strange and mystical characters.

The thing about Pinocchio that I remember the best (that his nose grew longer when he lied) was only a very small part of the storyline. While that particular incident occurs in this version (and woodpeckers poke away at his nose), the whole sequence takes less than a minute and then never reappears again.  So, in this version, the thing that identifies this character in my mind, and maybe yours too, is just a minor and not very important incident.

Director Matteo Garrone, who is an unknown to me, intentionally wanted to return the Pinocchio story to its darker side.  Because, I confess, I really don’t know the source material well enough to judge, it may be the case that this story – and not the Disneyfied version – is actually closer to the original.  It is not, however, what I expected, nor what I suspect most viewers expect.

And that makes this film both a surprising, intriguing experience, as well as a disappointment.  There are fantastical creatures in this movie that I couldn’t figure out what to do with.  There is the Fox and the Cat who swindle Pinocchio out of what money he had to begin his adventure.  And there is a beautiful Blue Fairy who, initially is a small child, but then, in a matter of days or maybe months, turns into a beautiful woman who represents a good side and a source of inspiration and moral guidance.  (I was able to determine that the Blue Fairy does indeed exist in the original story – after the hanging – but I don’t know about the Fox and the Cat.). And there is another old woman who appears as a huge snail, and moves at that pace.  What these characters mean I cannot say.  But somehow Pinocchio is perfectly comfortable in this world.  But then, he’s a wooden puppet who becomes a boy, so…

So you can start to see how this film might have been nominated for Makeup.  The Blue Fairy, the snail, the Fox and the Cat, not to mention the wooden face of Pinocchio himself, were all exquisitely done and, actually, if the category were strictly makeup, I would say that this movie should have won the Oscar.  (Given that it also involves hairstyling, I have to give it a tie with Emma.).

There are several other top-notch considerations for Pinocchio.  The cinematography – especially of beautiful Italian landscapes – is superb.  Roberto Benigni (who plays Gepetto) is an Oscar Winner for the 1997 film Life is Beautiful.  Here he almost single-handedly holds the movie together with some great delivery of lines that deserved a bit more attention.  And the young boy, Federico Lelapi, who plays Pinocchio, deserves hearty applause.  (It took 3 hours to apply his face makeup everyday.) He had a certain ‘wooden’ cadence to his delivery that made him a credible puppet.  And the music, from Oscar Winner Dario Marianelli (Attonement (07)), was dramatic when needed, and subtle when not.

But the whole film felt like it was sort of slopped together.  Not enough attention was paid to the flow of the script and the director accepted scenes that should have been left on the cutting room floor.  As a whole, the story felt disjointed leaving a real feeling of disappointment.  The idea was right for this film, it just wasn’t executed with the proper attention, feeling, and care. 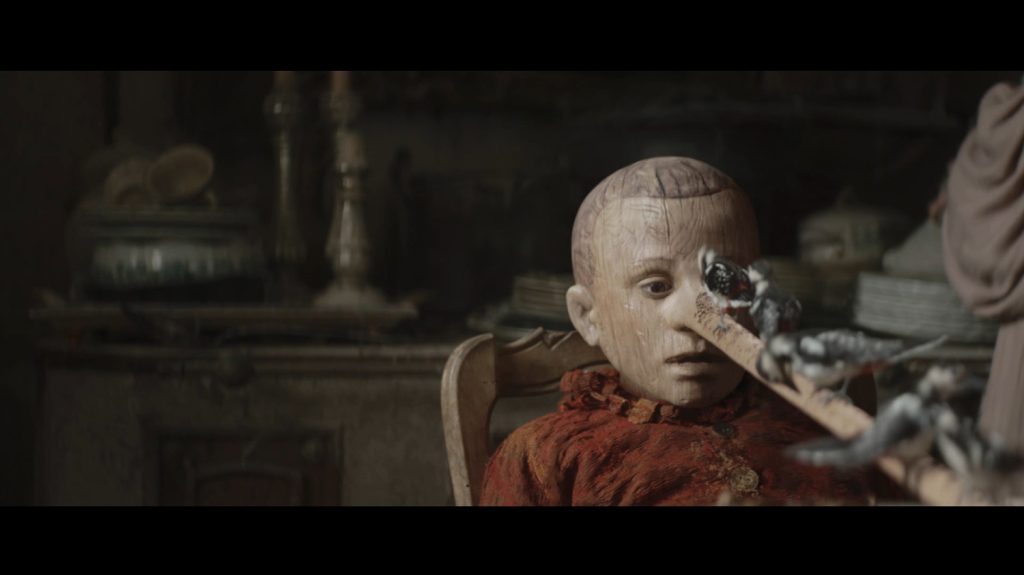