(3.5*) Writing with Fire is a profile in courage, telling the story of untouchable women changing Indian society. A case where the subject matter overwhelms the filmmaking. Writing with Fire is a story of courageous women working in a very hostile environment.  Some forty women work for the Indian news service Khabar Lahariya (Waves of News).  Here are three of their stories:

Suneeta: As a child she carried stones in a basket on top of her head to fill up a trolley car.  She earned about 2.50 rupees/day.  After the mines were shut down, the ‘mining mafia’ continued to operate them.  Suneeta, now in her twenties, went back into the mines to expose the illegal and dangerous operation.  Her reporting eventually stirred the national press in India to pick up the story and the mines were shut down.  Meanwhile, her father insisted that she stop work for the newspaper because he couldn’t pay the dowry demanded by potential husbands who would allow her to continue working.  Finally, she did quit work, got married, but only a month later, returned to the newspaper.

Shyamkali: She was one of the younger recruits and her hesitance at participating is obvious.  As the group wants to transition to all “digital” capture and display of the news, she is at a severe disadvantage.  She has never handled a phone or any other device, is unnerved by the buttons on the phone being in English, and, because she has no electricity in her home, cannot charge the phone that is given to her.  Despite these odds, she is richly supported by the older women in the group and, despite being married and with children, continues her work reporting on problems in her community.

Meera: One of the older women in the group, she was among the original founders of the newspaper in 2002 and was a key figure in the move to digital in 2016.  She was only 14 when she got married and had her first child not too long after, but was allowed by her enlightened in-laws to get an education and, in fact, earned three degrees including a Masters.  Meera’s husband, even years later, does not believe that her journalism efforts will prove successful and openly tells her and the filmmakers such.  Meanwhile, Meera, working as both a reporter and a mentor for all these women, works very long days, often to the neglect of her children.  She is, clearly, the leader and the guiding force for all of these women.

Writing with Fire tells the stories  of these three women, but it also touches on many more.  Their journalism venture, Khabar Larahiya is an all-woman enterprise and is more than an ongoing anomaly in a very difficult environment.  The newspaper first started publishing in 2002, founded by Kavita Java Meera Katav (shortened to Meera here) in the Indian state of Uttar Pradesh.  But they have such a formidable set of odds against them, that it is surprising that they are still operating, twenty years later.  In the first place, this is a state where the violence against women is one of the most severe in India – rapes and even murders are more than common and often not even investigated because women are considered more like property than human beings.

Add to the fact of being women, the overwhelming condition that they are all Dalits, or more commonly known (in the west) as “untouchables”.  In the Indian caste system, which has operated for more than a thousand years, people are divided into four major castes, each of which is assigned a corresponding role in the socio-economic system.  The four major castes are relegated to roles as priests, warriors, traders, and laborers.  The “untouchables”, however, aren’t even part of the traditional caste system and the men occupying this bottom rung in Indian society are typically involved in sanitation work – working the sewer systems and collecting garbage.  Women “untouchables” are rarely seen outside of the home.  Although accurate population estimates are hard to get in India, it is estimated that there are more than 200 million Dalits in India, or about 16% of the population.  In other words, the bottom rung of Indian society is a huge number of people.

So, now imagine how a team of 40 “untouchable” women are able to have a real impact on Indian society.  They courageously go into all-male environments (like mines or political rallies) and hold up their iPhones to record what is happening in the face of taunts and, in some cases, physical obstacles.  And yet, their reporting has often produced results.  Today, twenty years after their founding, they are still successful in a digital world.  In fact, you can click on the link above and go to their website – it is operating now.

Writing with Fire tells their story objectively and yet manages to display the humanity of these women in sometimes touching ways.  We feel for Suneeta as she debates leaving the paper and getting married.  And then we root for her when, a month later, she returns.  And I couldn’t help but fondly watch Shyamkali as she patiently learns, not just what an “angle” is on a news story, but what the English letters on the buttons on her iPhone mean.  (She is the one who doesn’t even have electricity in her home, but, somehow, seems to progress the most).  And you have to love the patient way Meera brings her brood of sister untouchables along with her, undaunted by the incredible obstacles in her path, including a non-supportive husband.

I suspect Writing with Fire was filmed in the same way these reporters gather their stories.  The filmmakers followed these women with their own iPhones positioned to gain the proper perspective.  There is some narration, but mostly these courageous stories are told by the persistence of the women living them.

This isn’t a great documentary, but is, perhaps an essential one that tells a story that promotes optimism for the future of humanity in times when we often don’t see it.  An interesting fact in evaluating documentaries is that they often involve an overwhelming subject matter, making the filmmaking kind of irrelevant. (See Summer of Soul, and Ascension for other examples.)   That is the case here and anyone interested in the struggles of oppressed people, and women in particular, will experience wonder in Writing with Fire. (3.5*) 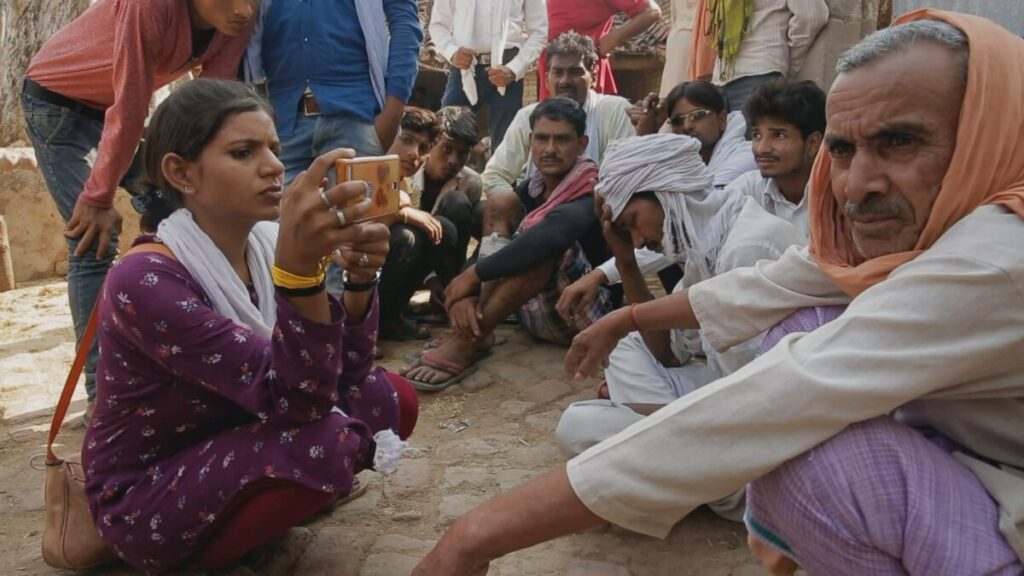 2 thoughts on “Writing with Fire”