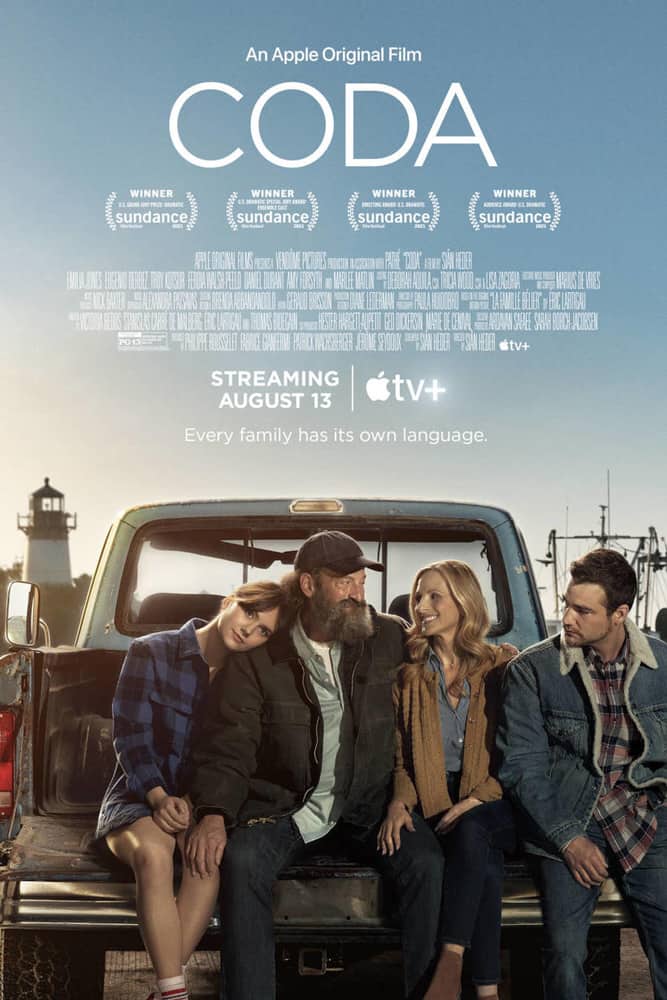 “Anyone can say they love someone…It’s loving someone enough to let them go that will prove that love.” – Jessica Jung (A young Korean American singer)

I came across that lyric as I was doing my research for this review and it summarizes perfectly why this movie works so well.  The fact that it comes from a young female singer is just icing on the cake.

CODA (Child of Deaf Adults) won all three Oscars it was nominated for, including this year’s Best Picture race.  It is a simple story, simply told, but is one so very appropriate for our times right now.  If you haven’t seen it yet, then definitely add it to your list.

Ruby Rossi is a high-school senior in a Massachusetts fishing town (the movie was filmed in and around Gloucester).  She is much like any other senior, except for a couple of things that make her unique.  First is that she is the youngest child in a family of four, the other three all being deaf.  Her father, Frank , is a life-long fisherman and owns a trawler.  He is madly in love with Jackie, her mother,  and they “can’t keep their hands off each other”.  Leo (Daniel Durant) is Ruby’s very protective, older brother.  All four of them wake up each morning at 3:00 AM, make their way to the fishing boat, and bring in a haul of fish for market before Ruby gets on a bicycle  to go to school.  There, exhausted and smelling “fishy”, she frequently falls asleep in class.

As the only hearing person in her family, Ruby is often called on to communicate between her family and the outside world.  In one, absolutely hilarious scene, she has to mediate between her parents and their doctor when they have to discuss a certain problem they are both having with their private parts.  In another scene, it is very clear that Ruby has a very close, but maybe not comfortable, understanding of just how much her parents love each other! In other meetings, she must stand up for her family’s fishing business in a roomful of people who are clearly not her equals and who even maybe don’t view her parents that way either!  The responsibility for her family that falls on Ruby’s shoulders is huge and not typical for someone her age.

But there is one more difference Ruby has from other kids her age – she can sing.  This is established right off in the movie when she sings on the trawler, even though neither her brother or her family have the faintest idea what she is singing or what it sounds like.  In a delightful series of encounters, her talents are finally recognized by the high school choir instructor, Bernardo Villalobos (Eugenio Derbez).  He convinces her that she can, indeed, sing well and gets her to apply to a prestigious music college in Boston.

So we have Ruby now caught between two futures.  One where her family really needs her as their interpreter with the outside world and another where her own budding talents suggest that she has real promise on her own in a very different world.  As you might expect, there is also a boy involved, Miles, and his role is an important part of the story.

Emilia Jones, playing Ruby, is an unknown gem.  Only 19 years old when this film was released, she is, basically, playing someone her own age – a high school senior.  What was different for her, was playing as a CODA.  She studied American Sign Language, singing, and how a fishing trawler works for nine months before filming started.  Her commitment to her craft is obvious and she has a wonderful way of nailing the facial and body expressions that make her inhabit this role so perfectly.  It certainly helps that she can sing well, and she performs eight songs on the song track either alone or with Miles (Ferdio Walsh-Peelo).  She was nominated for a BAFTA lead actress award, but, probably because she is so young, she did not get an Oscar nod.  Too bad, but we’ll be seeing, and hearing, her again.

Marlee Matlin, the mother, was the first deaf actor to win an Oscar, for her ground-breaking performance in  Children of a Lesser God  more than 35 years ago.  Here she shows confidence, coupled with a certain amount of uncertainty that seems so appropriate in this situation.  There is a scene where she confides in her daughter her fears about how Ruby’s hearing might become a real problem in their relationship – that throws an unusual wrench into the usual mother-daughter story.

Troy Kotsur, the father, won the Supporting Actor Oscar for this performance – the first male deaf actor to win an acting Oscar – thirty-five years after Marlee’s victory.  I’ve never seen him before, but his performance here is perfectly nuanced as he seems to capture the difficulties of being deaf in a hearing world while still maintaining his own self respect.  Of course, what he brings to the role is a lifetime of knowledge about exactly how to do that.  He also communicates the sensitivities of a caring father – there is one scene in particular, near the end, where, although he can’t hear a thing she is singing, he asks her to sing a song and participates in a rather unique way.  He leaves that scene, not understanding exactly what singing is, but definitely appreciating how important singing is to her.  It is a touching scene between a father and a daughter that serves as the final resolution of the essential conflict in this film.

Sian Heder – who worked as a writer and editor for three years on a TV show I really loved (Orange is the New Black) – won the Oscar for Adapted Screenplay for this film. The screenplay is adapted from the original French movie La Famille Belier (2014).  That film wasn’t nearly as successful probably because it did not use deaf actors to play deaf roles.  Heder, who also directed CODA, is to be commended not just for being ‘politically correct’, but also for being authentic in the depiction of the deaf world.  Heder is another woman we will be seeing more of.

Perhaps what makes this film resonate so much with audiences – it is tied with Dune for second among all 28 mainstream Oscar films in audience ratings – is that the essential conflict in this story is really shared by nearly everyone, despite the setting in a deaf family.  That conflict is the eternal one between the expectations and norms of the various groups that we as people belong to, and the fundamental need for self-expression, to become your own person.  Ruby, as the only hearing person in a deaf family, plays a very important role.  But if she is to become her own self, then maybe she can’t continue to play that role forever.  And her family, must come to understand that and release her from their own lives.  What makes this especially poignant is that Ruby’s dream is based on something that the family cannot possibly understand.  If they really love her, they have to be able to let her go and yet it is for something totally beyond their comprehension!  That makes letting her go especially difficult and courageous.

“GO!” Is a command used at least three times in this film.  Each time it is in a different context, but it always retains a special meaning.  It is not used in a negative way to indicate contempt or anger, but rather, especially towards the end, it is an expression of love and of the desire to see someone become their own person.  As Jessica Jung would sing, it proves that love.