(4 Stars) Engaging and sumptuous. A superb production from millennials. 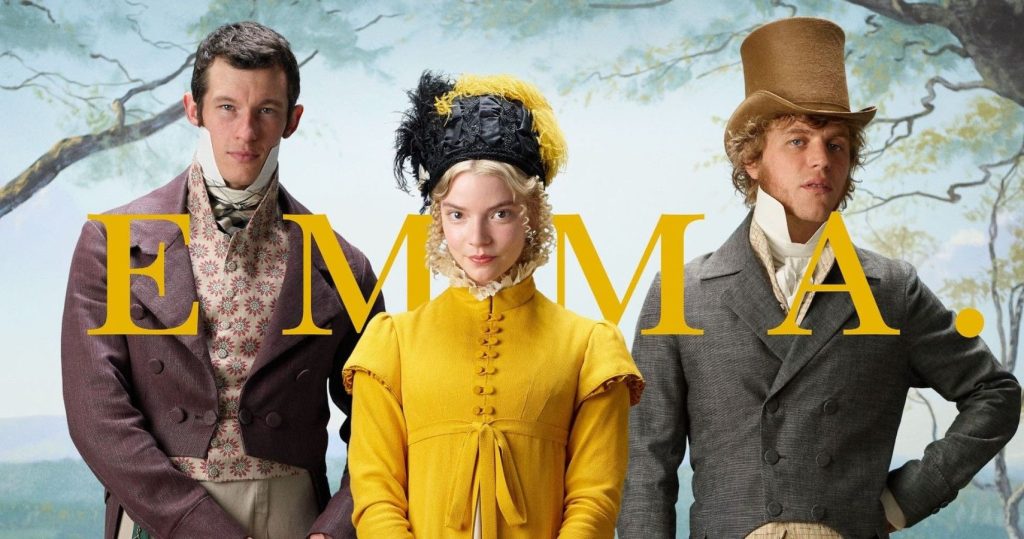 Notice the “.” At the end of the movie title!

Possibly, like me, you missed that.  I found out later it was there and had to go back into my website and other lists I had made of this year’s movies and add that little dot.  But, despite all my research, I haven’t been able to find out exactly why it is there!

One suggestion is that it denotes the last book by Jane Austen published during her lifetime.  The suggestion is that, in many ways, “Emma” is some sort of culmination of Austen’s work – the endpoint of her efforts.  The movie is, of course, based on the book  but Austen’s book title has no period.  Although I’ve read Austen’s “Pride and Prejudice”, I haven’t read this one.  From what the critics have written, though, it appears that the script, from Booker Prize winner Eleanor Catton, maintains a fairly high fidelity to the text, with much of the dialogue taken directly from the book.

There have been multiple attempts at bringing the novel to the big screen and another, possible, explanation for the period at the end of the movie title is that this is intended as the ultimate and final version needed of this story.  Although I didn’t see any of them, there were three different versions in the 1990s – a big-screen version with Gwyneth Paltrow, a TV mini-series with Kate Beckinsale, and Amy Heckerling’s “Clueless” with Alicia Silverstone.  Although you can always ask whether we needed yet another version of the same story, it is perhaps, a testimony to the enduring nature of Austen’s story that we have one this year and that it is, really, quite good.

This version is produced by, and possibly resonates most strongly for, millennials.  This is director Autumn de Wilde’s first feature film, having built her reputation primarily as a producer and director of music videos for bands like Florence + the Machine.  In Emma. De Wilde has managed to produce an intriguing version that remains true to its source, grounds it firmly in the settings of 1815 England, and yet manages camera angles and provocative suggestions that almost suggest undercurrents of today’s social media – including selfies.

And she has cast a terrific slate of millennials to play the major roles.  In her choice of Anya Taylor-Joy to play the title role, she has found an incredibly expressive face that, as James Berardinelli (ReelViews) notes “knows how to deliver Austen’s dialogue with right mix of tartness and seriousness.”  Sarah Lyall (New York Times) says she “plays Emma with style and attitude and sharpness, as if the character has stepped out of a Regency England version of “Mean Girls”.

One of the many ways de Wilde and Taylor-Joy are able to find such a successful portrayal occurs late in the movie when, out of no-where, Emma gets a nosebleed.  Although it is hard to imagine how she did it, Taylor-Joy apparently was able to summon up the nosebleed on demand in an emotional scene where it reveals the human side to the “mean girl” character.

At the very beginning of the movie, we see the naked backside of the man who ends up playing a major role in the film.  Given that the brief scene is the only hint at any sex in the film – and earned the film its PG rating – the scene also has the effect of “warming up” the characters and giving them some current day emotional content beyond the stuffiness of the times.  The man is Mr. Knightley and he is played by Johnny Flynn, a British millennial best known as a singer.  Here he serves as a credible foil to Emma’s constant meddling.  Together, the two of them create an interesting sexual tension that, although never really acknowledged, seems to permeate the entire film.  Between her nosebleed and his backside, there is just enough physicality.

And there might be a third explanation for the period at the end of the title.  The little guy also appears at the end of each seasonal section of the film (SPRING., SUMMER., etc).  The idea is that the period is to also suggest that this is a “period” film.  Which, basically, means that it is set in a specific historical era.  I actually have a theory, of sorts, that Hollywood has a big warehouse, somewhere, full of Elizabethan costumes.  In order to make sure that this huge investment in “period” costumes does not go to waste, it seems that every year there must be at least one movie set in that era.  For the 2020 Oscars it was Greta Gerwig’s “Little Women”.  The year before that, there was “The Favourite” and “Mary Queen of Scots”.  And, it seems, you can go back every year and find one Oscar-nominated movie that is set in that time period.

In every case, those films also get nominated for Costume Design with the clothing being one of the critical points to make the film a “period” piece.  Such is the case with “Emma.”.  Alexandra Byrne receives her sixth nomination for costume designs involving, mostly, Elizabethan costumes dating back to Hamlet (1996).  (She won the Oscar for “Elizabeth: Golden Age” in 2008). The costumes in Emma are all terrific – rich in colors, patterns,  and textures, and perfect in capturing the wealth of the people who live in them.

And more could be said with the hairstyling.  Emma’s curls must have taken hours to do and they present a candy-like confection that you almost want to taste!  (The hairstyling and makeup were also nominated and, possibly, should have won.  We have one more nominee in this category to make a final call.)

Emma. Ranked pretty much in the middle of this year’s Oscar-nominated movies, and I’m not quite sure why.  There is much to recommend this movie.  The costumes, settings, and hairstyles all combine to create an exceedingly rich visual presentation, the acting is superb and tells a convincing story.  Although this is de Wilde’s feature debut as a director, I can believe we will be seeing her in future Oscar-nominated movies.

Perhaps, though, the reason the film doesn’t succeed so well is found in Austen’s own observation about Emma – that she is “a heroine whom no one but myself will much like.” She is not a character we admire or care for.  My wife found her obnoxious and distasteful.  She is, indeed, all of that.  But she is also a very interesting character, especially as played by Taylor-Joy.  There is an incredibly delightful scene involving a picnic at Box Hill.  As these wealthy dilettantes sit on the blanket enjoying various foods, they engage in playful banter, all designed to show their taste, manners, and breeding.  At one point Emma delivers a very pointed insult against the spinster of the bunch, Miss Bates.  The commentary is delivered with the most delightful ease, but is so withering in the way it literally destroys her target, that you can’t avoid the discomfort.  As de Wilde notes “If that scene at Box Hill doesn’t break your heart, the movie is ruined – its over.”  The consequences of Emma’s fateful indiscretions are so severe that it changes her life.  And exposes the fallacies of not just this time in England, but of our time in social media.

Emma. Is a delightfully fun movie to watch.  The confectionery frosting in the costumes and hairstyling, is just the icing on some terrific acting by Taylor-Joy and her supporting cast, and the astute direction of de Wilde.  This film is better than the meager recognition it received.  Period. (4 Stars)

Available on Netflix DVD and to rent on Prime Video 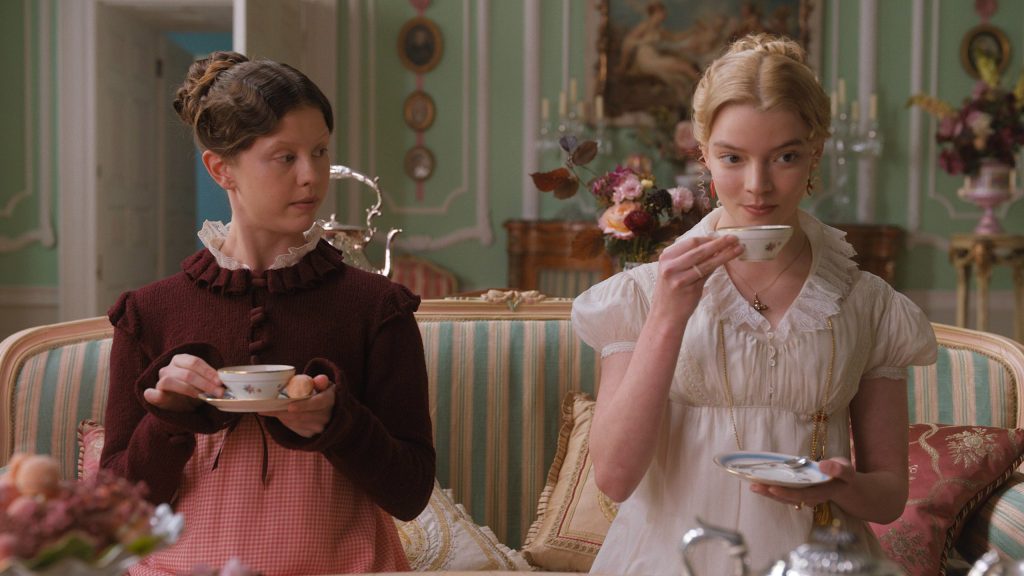