(4 Stars) Rousing entertainment placing the viewer right behind the wheel at 200 mph. 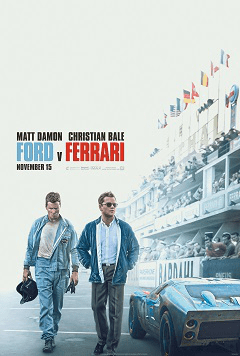 Ford v Ferrari might be exactly the movie you want to see right now.  There is nothing ominous or frightening, like in Joker.  Nor are there themes of malfeasance that will only make you angry, like in Bombshell.  Coming in the top third of all 38 Oscar-nominated movies and rated almost identically by both audiences and critics, the film represents the kind of entertainment that allows you to escape the crises of the world, if for just a couple of hours.

Here is how a few critics summarized the film:

A.O. Scott (New York Times): “Ford v Ferrari is no masterpiece, but it is real cinema…It is, all in all, a pleasant surprise.”

Tomris Laffly (Roger Ebert): “The final act…alone makes a case for the survival of big-screen entertainment.”

And, really, what’s not to like? Even if you’re not all that into auto racing (and, yes, I’m aware that some people don’t even consider it a sport), you will be pleased with the relationships portrayed in the movie, and the conflicts that play out far from the race track.

The title is a little misleading, but it does set the scene.  This is a movie about the battle between two corporate entities, Ford Motor Company, seeking to resurrect their image among the baby boomers of the mid-sixties – and convince them to buy cars (like the Mustang) – and the Old World traditions of Enzo Ferrari and his unequaled racing team that dominated Grand Prix racing in the fifties and sixties.  The story is based on the true-life contest between the men, the companies, and the countries that culminated in the 1966 race at Le Mans when three Ford vehicles crossed the finish line, 1-2-3, ending the Ferrari dominance of the ultra-high-speed race track.

The racing scenes are where the adrenaline is released.  Originally displayed on IMAX screens, you obviously aren’t going to reproduce that level of realism watching at home.  But this movie brings to the screen the high-technology of today’s movie making magic, including cinematography from inside these vehicles as they careen down roadways at speeds exceeding 200 mph.  The movie wasn’t nominated for its camera work, but it certainly could have been.

It was nominated for both Sound Mixing and Sound Editing and won the latter Oscar.  Donald Sylvester was responsible for creating the super-realistic sounds of rubber meeting the road, and metal meeting metal.  The scenes from inside the vehicles are simply superb, with the look and the noise that make you feel like you are there with the driver.  The Sound Mixing team, coming from films like Bohemian Rhapsody, The Greatest Showman, and LaLa Land, didn’t win the Oscar but they certainly knew how to recreate the race track. Ford v Ferrari also won the Oscar for Film Editing reflecting tight control of transitions between shots taken inside the vehicles, and from outside to give you the impression of being in that drivers seat.  The racing scenes illustrate the technical skills rewarded at the Oscars for this film.

The story telling takes a back-seat to the technical characteristics in this movie.  Director James Mangold has given us important films like 3:10 to Yuma, Girl Interrupted, and Walk the Line.  (More recently, he moved into the comic-book world with Wolverine and Logan,  the latter a movie that I really didn’t like).  He does an OK job here, but, honestly, this is probably not his best work.  The script was by Jason Keller, and Jez and John-Henry Butterworth.  The Butterworths are best known for their sci-fi film, The Edge of Tomorrow.  In short, the writers and director did some good things a while back, but haven’t done much outstanding recently.  Their work here is only good enough.

And that is probably a shame in this movie, because of the terrific talent assembled in the cast.  The two central characters are Carroll Shelby, the suave Texan race-car designer, and Ken Miles, the completely opposite British driver and machine critic.  Matt Damon plays Shelby with the smooth confidence that makes his character so appealing, especially as he battles the Ford executives.  Damon’s only Oscar is for his Good Will Hunting script.  (He’s been nominated for acting three times, but has never won – The Martian, Invictus, and Good Will Hunting).

Christian Bale, losing dozens of pounds from his role as Dick Cheney in Vice, does a wonderful job giving Miles an irascible character that is both grating and yet demanding affection from the start.  The two actors chose this movie in part because they wanted to work together and their chemistry explodes in a brawl towards the end of the movie that serves multiple roles, including comic relief.  Bale has won a Supporting Actor Oscar for The Fighter and was nominated three other times for The Big Short, Vice, and (one of my favorite movies), American Hustle.  He has demonstrated an amazing adaptability in the roles he has taken on and we will see him on the Oscar stage again.

If Damon and Bale are the core around which the movie builds, it gets a lot of its energy from the supporting characters.  Caitriona Balfe is an Irish actress whom I am not familiar with but has received Golden Globe nominations for her television work in Outlander.  Balfe plays Mollie, Ken’s wife, and displays the wifely supportive role EXCEPT when she feels like she is being left out of important events.  She shines in a brief scene, behind the wheel of a Ford station wagon driving as if it was on the track.  As a foil and source of strength behind Ken’s erratic personality, she gives his character a solid foundation.

Although the title of the movie, and the history invoked, seems to portray the Italians, and specifically, the Ferrari’s, as the opponents, it doesn’t take long to see that Shelby and Mile’s real conflict lies with the Ford executives.  I have to give a shout out to Tracy Letts who plays Henry Ford II.  There is a scene where Shelby takes him for a ride in one of the GT cars.  Although it isn’t clear whether Ford ‘soils himself’, he certainly learns that there is a very big difference between a race car and what he produces in Detroit.  (Thanks to the movie-making craftsmanship, you might be crying too!) Letts performance in that scene is another example of terrific supporting actors.

As all the critics have said, this isn’t the best movie ever made.  But it seems so entirely fitting for what we are going through right now.  It is simply entertainment, and a welcome diversion.  Turn the lights down and the sound up, and start your engines! (4 Stars) 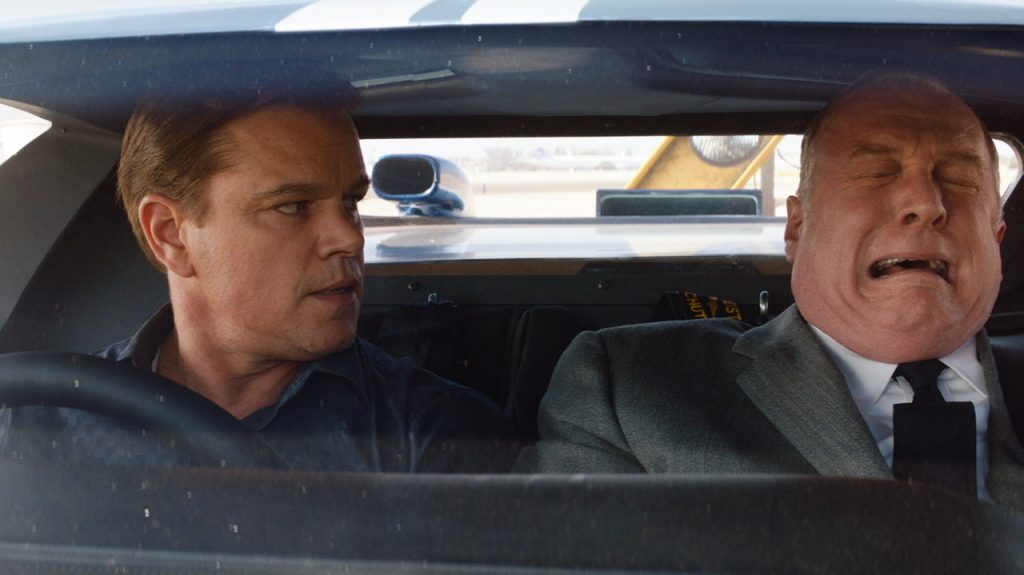