(3.5 Stars) Winner of the Documentary Oscar, it tells a riveting tale of Hannock’s climb of El Capitan. It is an awesome story, but I’m not sure how much movie skill was involved here. 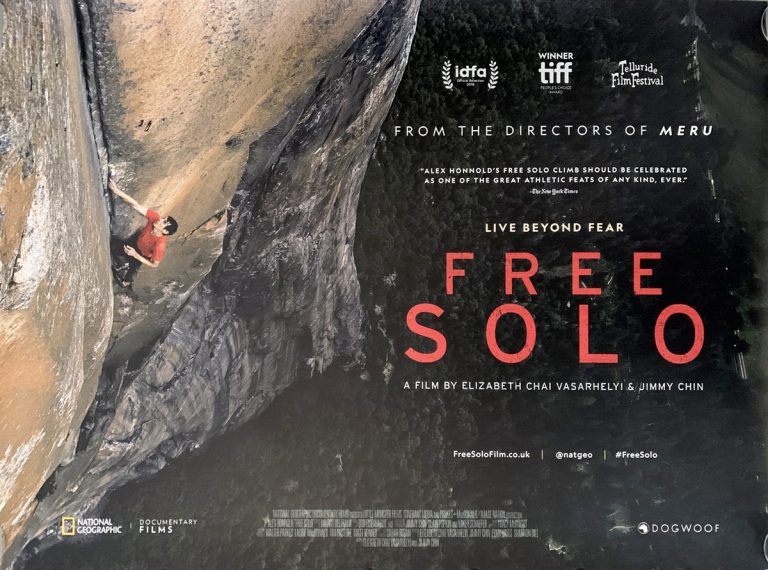 Free Solo has all the components of a good story-telling movie – suspense, intriguing characters, beautiful scenery, action and adventure. That it is a documentary, and hence, factual, makes it all the more compelling. I can certainly tell why it won the Documentary Feature Oscar – the story builds, the characters are interesting and we certainly care about them, there’s even a romance involved. And the cinematography is hard to beat. And yet, I’m not sure this should have won – it was just too easy – most of the other entries were much more difficult to conceive and develop. This one was a gimme!

In case you don’t know, Free Solo is the filmed story of Alex Honnold’s stunning climb up Yosemite’s El Capitan wall without ropes (hence the name ‘free solo’). Honnold was the first person – and so far, the only person – to make that climb without aid of standard mountain climbing gear. He scaled this 3200 foot cliff with nothing more than his hands and feet, aided, perhaps, by a little chalk to keep his hands dry and some climbing shoes to insulate his toes. Most climbers are simply too afraid of this challenge to attempt it, but Honnold not only did it, but managed the climb in a remarkably short 3 hours and 56 minutes.

The documentary succeeds for many reasons. One is that it effectively builds the suspense by educating the viewer on the technical aspects of the climb. Not only do we watch Alex as he navigates the cliff side first with the aid of ropes and partners. He carefully plots out his path, even marking spots on the cliff where he must attempt to place the toes of his shoe or grab some incredibly small indentation with the tips of his fingers. We are shown how he practices the approach and, bound by ropes to keep him from falling, sometimes fails to make the correct move. We also see pictures of the mountain face with drawings on the various ‘pitches’ he must navigate to make the ascent. The film does a good job of laying out the technical challenge.

It also doesn’t shy away from the technical problems of making the movie. Filmed by a crew of three or four cameramen and women, several of which are on the mountain face with Honnold (albeit with ropes), we see Honnold and the film crew discussing the problems of how to create a compelling and thrilling movie, without getting in the climbers way – without actually interfering with him in some way (like a loose rock) that could even cause the remotest distraction. The discussions between the director (National Geographic’s Jimmy Chin) and Alex reinforce the notion that there are two entirely different missions here – one is to film a movie; the other is to stay alive! Obviously, Honnold is most concerned with the latter.

Except that maybe he isn’t. Honnold doesn’t seem to have the fear threshold that most of us do. In fact, there is one scene in the movie where he is given an fMRI of his brain. The doctor concludes that his amygdala (which is apparently where fear is triggered) doesn’t work quite like most people’s – his is much more dormant, requiring a much higher level of stimulation to trigger it. This is our first indicator that there is something different about this man.

Another indicator is his priorities. He lived, for a decade, out of a van and continued to do so even after he bought a home in Las Vegas with his girlfriend. And what about his girlfriend? Sanni McCandless is an outdoors fanatic like him and is equally fit and extremely cute, with dimples and a vivacious personality. And yet, when they are discussing their relationship – which seems largely normal – Alex isn’t afraid to admit that she is second to his mountain climbing. She is told, in no uncertain terms, that she shouldn’t even attempt to dissuade him, despite her best interests being threatened by his death, from doing what he really just has to do! While a key strength of the movie is how their relationship is lovingly portrayed, it never succeeds in eliminating the key fact that it is not as important to Alex as making this, and future, climbs. The man simply has a compelling need to risk death that is more important to him than a loving, caring relationship. I wonder whether she will ever succeed in ‘taming’ this guy, or, rather, will he die attempting ‘one more climb’. It is also unclear how she reconciles her secondary position.

These are intriguing questions and are part of the reason the movie succeeds so well. The relationship angle paints a fascinating character study that imbues the main storyline (climbing the mountain) with additional interest and intrigue. I found it interesting that both Alex and Sanni agreed that she should not be around while he made this epic effort – perhaps the most important thing that he will ever do in his life.

It is not a spoiler to report that this is not a ‘snuff film’. Alex completes the climb (this is a well known fact) and has set a record that may take a very long time to break. (It is interesting that the Star Trek V movie starts with Captain Kirk failing in an attempt to Free Solo El Capitan. Kirk is nearly killed in the fall, but with medicine being what it is in the future, he is quickly healed and returned to duty. Spock meanwhile jokes that Kirk won’t be challenging the climbing record). Today’s medicine, though, isn’t that good and clearly the risks that Honnold takes are in the extreme. The fact that he succeeds does not take away the huge amount of suspense that this movie creates for the viewer. 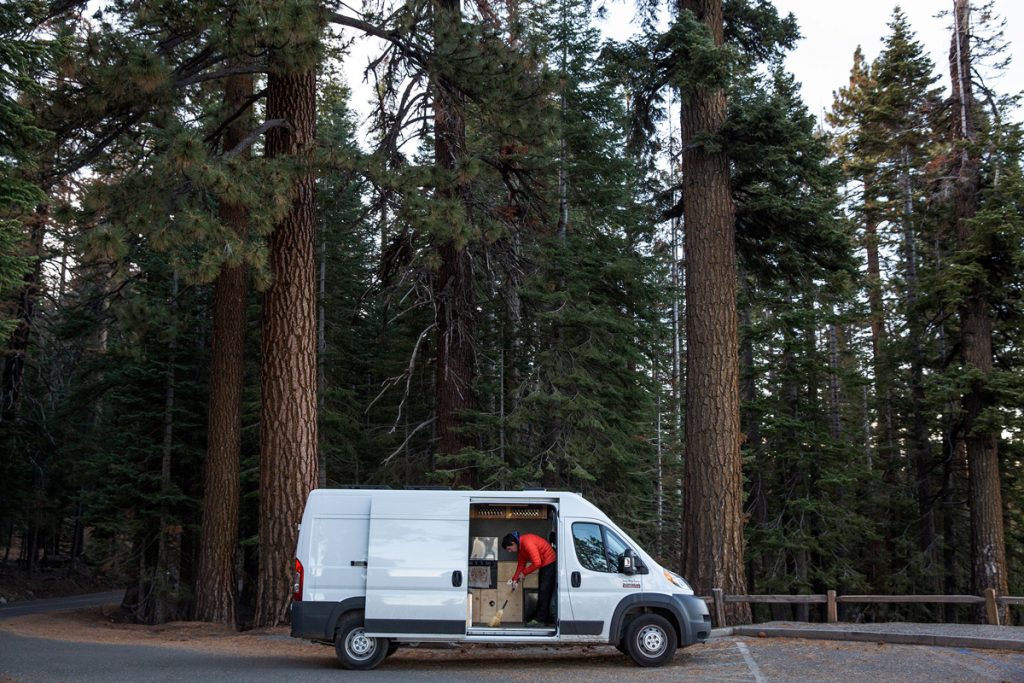 But it just seemed too easy to me. The inherent drama of the subject is so compelling that you wonder whether it was even possible to create a bad movie on this subject. Couple the subject matter with National Geographic camera sensibilities and the result is exactly what you would expect. So, while I think the movie is something anyone would enjoy seeing, I wonder if it is truly Oscar worthy. When I look at the ten years of filming that went into Hale County, or the two or three years in Minding the Gap, it seems that the simplicity of climbing a mountain makes the movie that much easier to make. When I look at how difficult capturing the total personality of Ruth Bader Ginsburg (in RBG) was, and compare that to the transparency of Honnold (even with Sanni) with his single-mindedness, I have to confirm that the RBG film makers had a much more difficult job.

The problem with judging documentaries is that it is very easy to confuse the subject matter with the film making. In a fictional context, a bad film means that the story isn’t told well. But in a documentary, there can be a totally compelling story that deserves all manner of appreciation. But that doesn’t mean that the filmmakers had to take incredible risks to film it. (OK, sure, there is a certain amount of risk, even with ropes, in being on the side of a mountain.). But that isn’t the same thing as, for example, living for a year with Al Qaeda terrorists in Syria (Fathers and Sons)!.

Free Solo is a compelling movie that everyone should see. But it was too easy to make for the filmmakers to receive an Oscar. For that reason, I can only give this movie 3.5 stars.