(3.5 Stars) Star Wars fans will enjoy this origin story of Han Solo, with excellent visual effects. If you’re not into Star Wars, though, well it may not appeal. 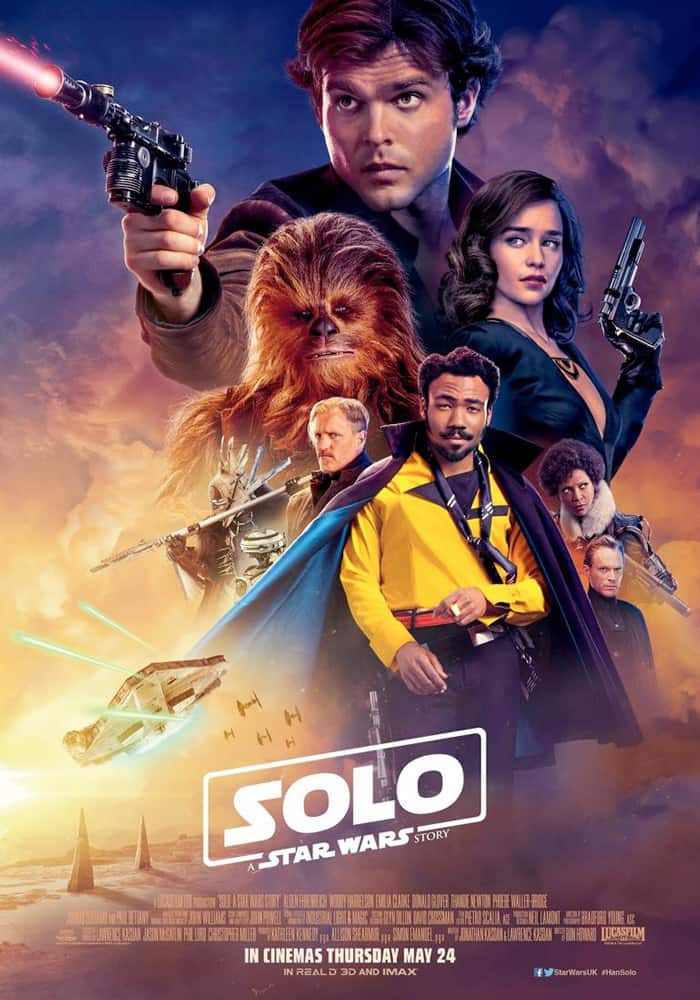 I don’t know all the details, but apparently the history behind this latest entry in the Star Wars franchise is long and ugly. The story was written by the father and son team, Lawrence and Jonathon Kasdan. The father received screenplay Oscar nominations for The Big Chill, Grand Canyon, and Accidental Tourist. He also wrote for Raiders of the Lost Ark, Wyatt Earp (94), and Silverado, but, more importantly he wrote the screenplays for two of the three original Star Wars movies (Episodes V and VI) back in the 80s. So the writing team has some experience with westerns, Harrison Ford, and the nuts and bolts behind the Star Wars mythology.

After filming on Solo was nearly over, and Kasdan had a chance to review the output for the original director team of Phil Lord and Christopher Miller, he was appalled at what they had done to it. Lord and Miller are better known for lighter, more humorous , material such as the Lego Movie, Spider-Man: Into the Spiderverse, Clone High, and 22 Jump Street and they had, apparently, taken all the seriousness out of his script. Furious, Kasdan ran to the Disney executive in charge of production and, using the gravitas of his background with the Star Wars traditions, got Lord and Miller fired (or as they say in the business, ‘they left over creative differences’.)

Turns out Ron Howard was free and came in to basically ‘save’ a $275 million movie. Howard had worked with George Lucas (the Star Wars original creator) on American Graffiti and was mentored by him for much of his career. (Harrison Ford also had a role in that movie, so there was ‘history’). So Howard, who directed Apollo 13 and received Oscar nominations for his direction of A Beautiful Mind and Frost/Nixon, was almost a natural to bring back the original flavor of the Star Wars movie as well as pay homage to Harrison Ford’s character, Han Solo. To do that, though, he had to reshoot almost 80% of the original footage and even changed a couple of cast members.

Given the chaos behind the scenes, it is perhaps not surprising that the reaction to the movie is not all favorable. It received a mediocre 6.9 from IMDB audience ratings and a corresponding 62 Metacritic score, putting it in the bottom four or five of all 37 Oscar nominated movies. James Berardinelli (ReelViews) described Solo as “An inelegant melding of a bland origin story with a generic heist tale.” Alan Scherstuhl (Village Voice) complained that it “has a just-finish-the-movie quality to it, an uncertainty about the pacing and seriousness of developments in its own story.” And the Flick Filosopher, MaryAnn Johanson quipped that “Han Solo would be disgusted.”

And yet it was fun and if you are a Star Wars fan, you probably must see it.

This entry in the franchise is not at all part of the original ‘trilogy of trilogies’ that George Lucas had envisioned. It IS part of Disney’s attempt to capitalize on the moneymaking power of the storyline by going back and, essentially, filling in the holes. This is a Star Wars movie, and yet, the Empire is hardly mentioned and neither is The Force nor the nearly-mythical Knights of the Jedi. Indeed, it is the only Star Wars movie so far that doesn’t even mention any member of the Skywalker family.

Instead it focuses on Han Solo, the character made famous in the original trilogy by Harrison Ford. His character was always the misfit in the cast, the outlaw with a colorful past and present, who could always be counted on to save the day. Instead of a white horse, he had the Millennium Falcon, supposedly one of the fastest ships in the galaxy that looked like a bucket of bolts. The movie’s purpose is to answer all the questions about Solo that were never answered in the original series. Like where he got his name; and his blaster; how he acquired the Falcon; and what the hell the ‘Kessel Run in under 12 parsecs’ meant. What was his past and did it include an intended lover?

Of course, maybe you don’t really care about those questions. If so, then the dozens of Easter eggs, and movie references sprinkled throughout the movie will go over your head – as most of them did with me.
Still, though, it is an action-packed adventure that never really lets up the pace. And the visual effects – the only category the movie scored a nomination in – are superb. Through motion-capture, CGI, and puppetry, the aliens, especially in the requisite bar scene, are delightful and the trips through the ‘space-time continuum’ are visual spectacles. Clearly it wasn’t just Howard’s reshoots that sent the budget for this movie to almost $300 million.

This is the first movie in our series of four movies that received Oscar nominations only in the Visual Effects category. (The winner, First Man, was disappointing and reviewed earlier.). Clearly the visual effects of this movie are far more ambitious than First Man and, really, much more imaginative. As we watch the remaining three, we will have an opportunity to make more comparisons.

In the end, though, I’d have to say that this movie is fun and is a spectacle to witness. If you are a Star Wars fan, then you have to see it. Otherwise, well, maybe spend your movie time somewhere else. (3.5 stars)