(2.5 Stars) I’ve loved Eeyore all my life, but this movie doesn’t move me in any particular way. Might be appropriate for families with small children. 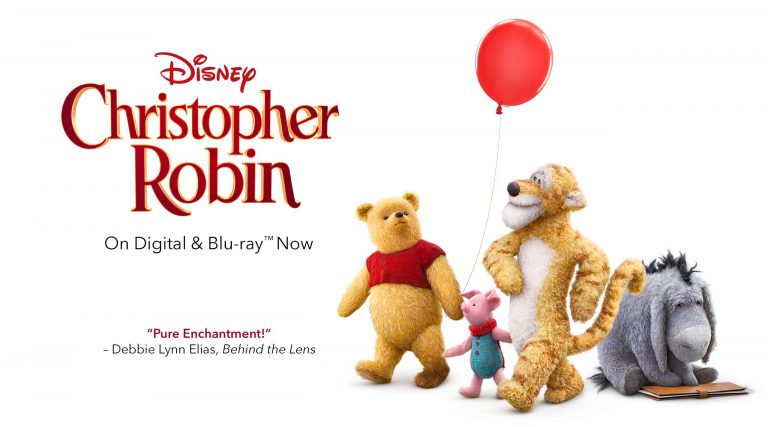 Eeyore is my favorite Pooh character. I even have a toy figure of him sitting on my desk. I used to also have a little stuffed Eeyore (with removable tail), but I passed that along to my granddaughter Annabelle! I identify with Eeyore – we’re both hopelessly grumpy and always bracing for the worst.

Winnie the Pooh, and his friends, are childhood acquaintances of most people I know ever since A.A. Milne wrote the books (with terrific illustrations by Ernest H. Shepherd) back in the 1920s. They were fun as a kid and, when I re-read them as an adult, I am left in awe with the wonderful little wisps of Pooh wisdom. There are many in this movie such as:
“Doing nothing often leads to the very best kind of something.”
“People say nothing is impossible, but I do nothing every day.”
And
“Sometimes, when I’m going somewhere and I wait…a somewhere comes to me!”

But this movie isn’t exactly about Pooh and the The 100 Acre Wood. It takes place after that. After Christopher Robin gives a tear-jerking goodbye to his friends, leaves the wood – and childhood – to go off to boarding school. (And after that, to war, and then on to wife, family, and a job as an ‘efficiency expert’ with the Winslow Luggage Company where he must cut expenses by 20%, presumably to include significant workforce reductions.) Christopher, played by Ewan McGregor, loses his childhood friends and so much more as he joins the real, adult world. In the process of growing up, he also risks all possible joys, including his wife Evelyn (Hayley Atwell) and daughter Madeline (Bronte Carmichael).

Unfortunately, we’ve heard this story before. The loss of childhood innocence is a common theme in Disney family movies, and we’ve heard exactly this message earlier this year in Mary Poppins Returns. The exact storyline told here is also a rehash of the Dustin Hoffman/Robin Williams movie Hook from almost thirty years ago (Spielberg’s delivery of the same theme). Despite the different location, and different original childhood story, the message to parents is still the same – don’t lose the possibility of innocent joy!

So, watching Christopher Robin, don’t be surprised if you shed a few tears – that’s to be expected in a Disney flick. At least keep in mind that, in this one, the Mom is still alive, even if she isn’t all that important. But the problem remains that the day after watching this movie, I felt like I had been left holding an empty bag. Once you get past the main theme of the movie, there just isn’t a whole lot left.

Yes, the script from Oscar winning writer Tom McCarthy (Station Agent, Visitor, Spotlight, Up) and Allison Schroeder (Hidden Figures) had multiple good lines in it (see the quotes above), but the storyline leaves you wanting. Jeffrey Anderson (San Francisco Examiner) wrote: “Christopher Robin misses the point. In trying to rescue the hero from his seriousness, the busy film hasn’t the faintest idea how to play.” And Odie Henderson (Rogerebert.com) adds “Even though the characters are pulled into Christopher’s real life universe, it feels as if reality has invaded the Hundred Acre Wood and sullied it.”

Tellingly, the movie wasn’t nominated for its script, but rather for the Visual Effects. And they are good without being taken to the extreme. Merging live-action and computer generated images (CGI) is a common practice these days (t was also done in Mary Poppins Returns this year, as well as the Star Wars movie Solo), the effect in Christopher Robin is nicely balanced. The best thing to be said about the visual effects is that the ‘stuffed toy’ nature of the animated characters is carefully retained – Pooh, and Eeyore, and Tigger really DO look like stuffed toys. Their mouths might move and they might walk, but they do so as if they were toys come alive off the bedspread. (The contrast between this kind of character and what CGI is fully capable of generating is nicely illustrated with the two characters Owl and Rabbit which, as in the original books, are portrayed as real, live animals). Some critics think the effect is a bit creepy (as in Chucky the Clown), but I think it is one of the strengths of this movie’s visual effects.

Still, though, two days after watching the movie, I find myself wondering whether there could have been more. Yes, I get the notion that I should never lose the enthusiasm of childhood joy – this isn’t the only source of that message. But I was teased with a lot of Pooh wisdom that never got fully developed. Oh, bother! (2.5 stars)