(4.5 Stars) My favorite action / adventure movie of the year with an intriguing story that bounces between a real dystopian future and an elaborate role-playing VR game. 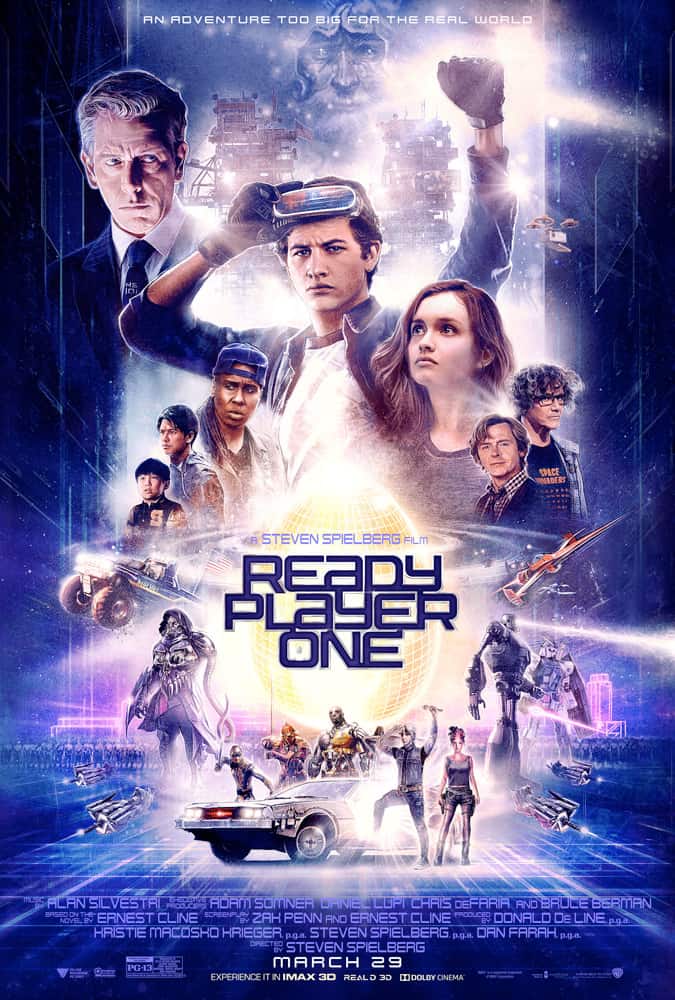 I loved this movie! No, it isn’t the best movie in the world, but after watching about a dozen so-so movies that only earned a single Oscar nomination – and usually no win – I was starting to accept that the rest of the movies on my list would be a chore to get through. But this was surprisingly fresh, visually and aurally stimulating, and with enough depth that my mind stayed alert throughout the entire film. While maybe not the most enlightening movie of the decade, it has to rank with one of the most fun to watch.

And why wouldn’t it, being directed by Steven Spielberg? Spielberg has won three Oscars, -two for directing Saving Private Ryan and Schindler’s List – and was nominated for directing such iconic films as E.T. The Extra-Terrestrial, Raiders of the Lost Ark, Lincoln, Close Encounters of the Third Kind, and Munich. (As producer, he has also been nominated five additional times and won the best picture Oscar once). So, bottom-line, Spielberg knows his way around a movie set and can conceptualize and direct a good movie. He has been quoted as saying that Ready Player One was his third most difficult film to make, behind Jaws and Saving Private Ryan.

What Spielberg has done with this movie has been attempted before – most notably, in my mind, with the movie TRON, but he has outdone those other movies in portraying not just the drama of the Virtual Reality gaming world, but also the artistic beauty and talent that is available there. Spending $175 million dollars to make this movie, including two years in the Industrial Light and Magic Lab, the movie’s special effects are fantastically relevant to the story line, because they exist inside the VR world. I’m not much of a gamer, and don’t spend very much time in the VR universe, but Spielberg’s presentation of that world is stimulating and appealing.

I think, though, that the success of this movie is because of how well it operates at linking all of its various levels. The characters exist in at least two different worlds – the real world (which is the only place you can get a ‘real’ meal), and the VR world which, in the movie, is called OASIS. In 2045, environmental collapse, income inequality, and corporate hegemony – pay attention folks – has produced a dystopian world where people live in trailer homes arranged in erector-set structures called ‘the stacks’. The powers that be control the destitute population by doping them up with the alternate virtual realities that advanced technology provides. In fact, aside from eating, sleeping, and pooping, people spend most of their time in the VR world.

OASIS is a very elaborate VR game world created by a genius named Halliday (who is sort of an amalgam of Bill Gates and Steve Jobs and similar type folks – i.e. ‘nerds’). But when Halliday dies, he leaves his considerable fortune and control of the OASIS game to whomever can find the all-important Easter egg. This contest, as you might suspect, sets off a competition between all of the best, and the worst, of human impulses (mostly the worst). Our hero, Parzival (Tye Sheridan, an actor with some credentials in the comic book movie world) scores an upset when he finds the first of three keys by being smart and thinking outside the box. He attracts other like-minded characters and soon joins up with Art3mis (Olivia Cooke) and three other characters with equally interesting backgrounds, to form a ‘clan’ that is moving towards victory in the game. Meanwhile, corporate America, in the form of a mega conglomerate seeking total commercialization of the internet (IOI) soon learns that it can’t win in the VR world, so they figure out how to eliminate their competition in the real world.

The back and forth between the real world and the VR world is actually one of the most fascinating aspects of this movie. Parzival and Art3mis engage in adventure in OASIS, but when they aren’t in the game, the real life characters are falling in love in the real world. The ‘clan’ is battling the IOI 6’ers in the game, while the real-life corporate figures are literally trying to kill them. Events in one world affect events in the other, and keeping them straight isn’t always easy.

Besides being visually and aurally stimulating, the puzzles presented in both worlds add to the excitement and drama of the movie. All four of us old farts in the Movie Group, agreed that this was not two+ hours wasted. Spielberg has given us not just entertainment, but also a stark portrait of a possible reality – our immersion in this movie world is confirmation of the attractiveness of VR. Is this a possible solution to our problems? Is it one we really want to explore?

Ready Player One has grossed almost $600 million worldwide more than covering its production costs. Now, I don’t believe earnings are the signs of a good movie, but it is an indicator that one should pay attention to what is stimulating popular taste. The average rating for this movie among the IMDB audience is a good, but not terrific, 7.5 putting it in the bottom half of the 37 Oscar nominated movies. Apparently the popular reaction is mixed.

Critical reaction is even more interesting with the movie getting a Critical Metascore of just 64, putting it in the bottom six of the 37 movies. Confused by this very low score – when my reaction is much more positive – I paid attention to what the critics said. The most negative reaction came from Mary Ann Johanson, the Flick Filosopher. She characterized the movie as “a nightmare of nothingness, of empty, soulless wankery, that serves only to reassure male dorks that their pop-culture obsessions make them special, and will make cute girls like them.” I guess I get that the movie, being about the VR gaming world, does sort of glorify that world. And I also understand that some male gamers have retreated into VR in such a way that they don’t function too well with women in the normal world. But are they all that way? Is that a fair indictment of this culture? Is there absolutely nothing the VR gaming world can offer to us? (And I lost my first wife to the gaming world, so I have an instinctual basis to hate it.). I worry about the negative effects of the VR world, but I don’t think there is nothing of value to be found there.

Other reviewers, mostly younger ones, have complained about the relentless references to 1980s pop culture. There are multiple web sites out there that try to catalog the references in the movie, or even more so, in the book by Ernest Cline. The movie is unapologetic about deferring to the cultural icons of the 80s. One of the best of them is the in-game dance scene between Parzival and Art3mis set to Saturday Night Fever. And the extended reference to Stanley Kubrick’s The Shining is a critical part of the movie. If you aren’t interested in 80’s pop culture, then you probably shouldn’t watch this movie. But, aside from it being, perhaps, more relevant to some of us old codgers than to younger people, is that a reason to kill the movie?

Obviously, I don’t think so. In fact, this movie should have been nominated for many more awards than it received. And, although I still haven’t seen Avengers: Infinity Wars, I think it should have won the Visual Effects award. The Visual Effects Team has outrageous Oscar credentials including work on the Star Wars, Star Trek, Harry Potter, Transformer movie series as well as Gravity. The composer, cinematographer, and film editors, have all received Oscar nominations, or awards. This was an incredibly talented team and the work shows it.

It was not a perfect movie. I would have liked to have seen more development of the characters in the real world. Especially, the relationships between the members of the winning ‘clan’ and, particularly, Art3mis and Parzival. For that, I have to drop my rating to 4.5 stars.

2 thoughts on “Ready Player One”