(4 Stars) For those of us who like our heroes simple, with tense, sustained, action. 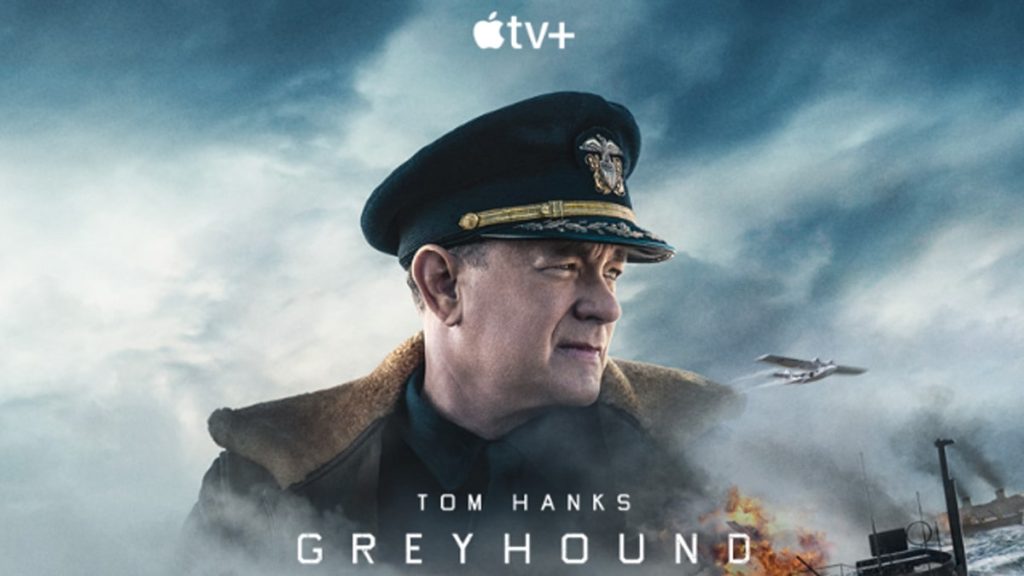 Greyhound is surprisingly good and is definitely worth your viewing.  Given its rather poor ratings among both audiences and critics  (ranking in the bottom third of this year’s Oscar-nominated movies), and receiving only a single, technical, nomination (for Best Sound), the expectations weren’t high.  But it was written by and starred Tom Hanks, so I was a bit confused as to why it didn’t score higher in popular and critical opinion.

To be sure, you can find fault with this film.  There is really just a single character that has any development at all, and that would be Tom Hanks’ character, Captain Krause.  Krause is a World War II Naval officer escorting 47 assorted cargo ships across the Atlantic bringing valuable supplies from the US to Allied ports in Europe.  This is Captain Krause’s first mission and in the early scenes we learn much about the man, including that he is leaving Evelyn (Elisabeth Shue), a woman that he loves very much, at home.  And that he is a very religious man who prays before bed and every meal.  His humility and confidence are made all the more believable by being portrayed by Tom Hanks, perhaps the actor with the best reputation for integrity of anyone in Hollywood!

But Captain Krause is, ultimately, who this movie is all about – no-one else is developed to any degree at all.  Shue’s character has about one minute of dialog at the very beginning and again at the very end.  And, as befits a World War II Naval story, she is the only woman in the entire movie.  Other men appear – obviously, you can’t run a large naval ship during war without a substantial crew.  But aside from one or two men who help carry out Krause’s orders, they aren’t developed beyond the rather mechanical role that they play in this well-oiled machine.  Clearly, this movie is the story of three extremely difficult and challenging days in the life of one man.

As long as you know that, going into this movie, then I think your expectations will be properly adjusted and met in overwhelming fashion.  The movie details one harrowing situation after another as Krause battles a ‘wolfpack’, a group of German U-Boats that are out to sink as many of these supply boats as they can to derail the allied war effort.  Krause’s ship, along with three other Allied warships, are the only protection this merchant fleet has as they cross the ‘Black Pit’, the area in the middle of the Atlantic beyond the range of supporting aircraft.  During this 50-hour period the fleet has to rely purely on their own resources.

Just 90 minutes long, this film, better than any other movie I can think of, brings to life the intricacies of battle on the high seas.  Ships don’t turn quickly like land vehicles do.  And so it is all the more remarkable when, by deftly making rudder and propeller  changes, Krause is able to steer his destroyer between enemy torpedoes, or avoid collision with one of his own huge cargo ships as he zig zags across the sea trying to track down and kill his opponents.  It is Krause’s decision-making, coupled with incredible amounts of good luck, that are elevated in Greyhound to become the basis for an action-packed hour of tension that will have you rooting for the good guys with zeal, like old-fashioned war movies are supposed to do.

Hanks not only plays the main character, but he also wrote the script.  Since I was unfamiliar with Hanks as a writer, I did some research and discovered that aside from a few episodes of some TV shows, and a script for an animated documentary about Space Exploration (Magnificent Desolation (2005)), his only other script was for a well received That Thing You Do  (nominated for Original Song) back in 1996.  In Greyhound, Hanks unleashes a remarkable ability to sustain dramatic tension almost strictly with the spoken commands of captain Krause and the anxious moments awaiting the results.  Incorporating more than enough military-sailor-speak, Hanks’ Krause speaks with authority, conviction, and with the faith that what he is doing will work.  And, with the grace of God, or maybe sheer blind luck, it does!  While I agree with many critics that this script doesn’t serve up a cast of well developed characters, I do think that Hanks has captured the tension and excitement of an action movie within a very tightly-bound environment – the bridge of a Naval destroyer.  Maybe Hanks, even at his age of 67, has a second career ahead of him – not that he needs one.

Greyhound received just a single Oscar nomination, for Best Sound – this year’s Oscars combined Sound Editing and Sound Mixing, which no real person could differentiate anyway, into a single category.  It is common for war movies, with the explosions, gunfire, and all that results from that commotion, to be nominated in what used to be called Sound Editing (basically, the creation of sounds to match the events on the screen).  If the Sound Editing category had existed this year, I think Greyhound would have won it hands down, simply because the sounds of surface to submarine warfare are an essential part of the movie’s experience.  But, because Editing was combined with Mixing, Greyhound had to compete with musical masterpieces like Soul and Sound of Metal (which won the Sound category).  I can understand the loss, but the sound effects in Greyhound are memorable.

In the end, I think viewer reaction to this movie is going to depend on how they define a ‘hero’.  Younger generations may tend to see heroes in people like The Avengers, whereas some of us older folks define a hero in simpler terms. Brian Tallerico (RogerEbert.com) wrote that Greyhound “certainly feels like a film tailor-made for dads of a certain generation – people who don’t want anything overly complicated or nuanced in their stories of heroism.”  Captain Krause is not Captain America.  He is more the modest, humble, and efficient man that men like Hanks, and myself, saw in our fathers.  So, yes, this is probably going to be most appreciated by us Boomers.  But for us, it is a 4 Star movie.

Available only on Apple TV+