(2 Stars) A retelling of the original story with amazing computer-animation technology. Watch it if you, or your family, didn’t see the original. 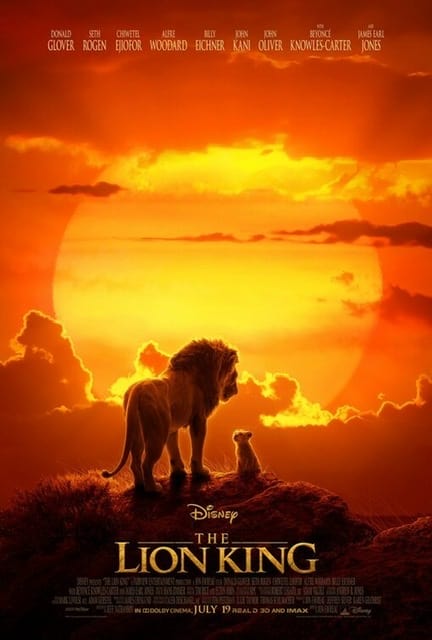 I often make the assumption that people running the major motion picture studios are smart, creative people and that they make intelligent decisions all towards producing and directing smart, creative movies.  Frequently that assumption is true and, if I didn’t see it on my first pass through, I usually come around after I think about it awhile.

Sometimes, though, I just can’t make myself see the reasons behind some of the things they do and, sad to say, this new Lion King remake is one of them.  And, I can say with some satisfaction, that I’m not alone.  While audiences gave this movie a 6.9, ranking it 30th out of this year’s 38 Oscar-nominated movies, critics rated it even lower placing it just fourth from the bottom.  Reading some of their reviews, there isn’t a whole lot of charity being extended to this effort.

Everyone, though, agrees that this is a technical marvel.  Indeed, it received only a single Oscar nomination, for Visual Effects.  The four men heading the visual effects team have an impressive Oscar history with multiple nominations between them before this movie and four wins including for the movies Avatar, Hugo, Apollo 13, and Titanic.  The movie that ties them together, though, is their Oscar winning work on the 2016 Jungle Book.  If you’ve seen that movie, then you have some idea what is happening with this year’s collaboration.

This year’s Lion King might well represent the pinnacle of achievement for computer-generated photo-realism.  Life of Pi suggested what computerized animation of animals might look like.  Jungle Book took it to another level; Lion King takes it to the logical conclusion.  Indeed, it is hard to imagine how it can be taken any further.  With a budget estimated at $260 million, there isn’t a single live animal (nor human, for that matter) in this movie.  Every single creature and all of the action is computer generated.  Although some background shots were taken on the scene in Africa, they were translated into computer code, amplified, and modified by algorithms and spit out as billions of zeros and ones all aligned into pixels on the screen.  ‘Not a single animal was harmed during the making of this movie’ because there never were any to begin with!

The significance of this achievement will become clear to you when you see this film.  There are 86 different animal species represented on the screen in this movie (No, I didn’t count them, somebody else did!) and each one of them is rendered with incredible precision.  Not only is the fur real enough that you can imagine it shedding on your sweater, but the muscles and bones of the animals move exactly as you remember from the last time you were at a zoo, or watched a National Geographic documentary.  And it isn’t just the animals – the plant life, the water in the streams, the stars in the sky – everything is as real as you can get from a photographic plate.  I can see why the film was nominated for Visual Effects

But that quickly becomes a major weakness because, quite simply, lions don’t talk and they certainly don’t run around plotting Hamlet-like stories.  In the original Lion King (25 years ago), the lions were hand-drawn, extremely artistic, renderings of a likeness of a lion.  To see a caricature of a lion talk, sing, and navigate a complex story-line is fine – we’ve been doing that with Disney animated characters for several generations now.  But to see what certainly looks like a real lion speak words and even sing songs is too jarring – it disturbs the balance of reality beyond the ‘suspension of disbelief’.  Perhaps the photo-realism was just a bit too perfect.

Unfortunately, that’s not the only criticism the movie deserves.  Possibly the more severe complaint is, as James Berardinelli (ReelViews) put it, “the film struggles to find the magic that came so easily to its predecessor.”  Indeed, I think I’d argue that beyond the stunning visual effects, there just isn’t enough new here to justify the movie.

In so many ways, the film is nothing more than a scene-for-scene remake of the original, updated with current technology.  The storyline will be recognized by anyone who saw the original – that would be most of us older than about 30 – and, unfortunately,there isn’t anything new to keep our interest.  As in the original, there is comic relief from the unfolding Shakespearean tragedy in the form of the slapstick antics of Pumba (Seth Rogan) and Timon (Billy Eichner) – the warthog and his companion meerkat.  It is extended a bit in this version and, arguably, a bit funnier, but there is nothing new in their characters.  There is another extension in a sequence where a tuft of Simba’s (Danny Glover) hair makes an improbable journey over hundreds of miles to fall into the hands of Simba’s former guardian and teacher, Rafiki.  In addition to making the movie even longer, the scene really is just another exercise in terrific visual effects.

Even the music is nearly identical.  The same six songs by Elton John and Tim Rice are in both movies.  Beyonce (Nala) does a terrific job with Glover in “Can You Feel the Love Tonight?”, probably the musical highlight of the movie.  (She also sings one other new song “Spirit”, which she wrote just for this movie.)   But almost all of the rest of the music was either taken from the original movie or was modestly updated by Hans Zimmer, the same person who composed the score 25 years ago!  In short, $260 million seems to have bought us mostly an awful lot of computer time!

And it didn’t have to be this way.  I can’t help but compare this movie with another movie we’ve reviewed this year in our animation festival, Toy Story 4.  While I commented in that review how amazing the CGI effects were in that movie, we never lost our way towards forgetting that these were animated figures.  It was OK to see toys talking, because they looked like cartoon toys.  Furthermore, Toy Story 4 was not a remake of the original Toy Story – also 25 years old!  Instead the filmmakers decided to tell a new story.  Yes, it used the same characters, but updated their situations to creatively appeal to both new, and old, audiences.  Toy Story 4 works both as a retread of an older movie idea, and as a fresh approach for a new generation. The Lion King filmmakers chose to update the technology without providing any new message.

Critics all identified this problem: Matt Zoller Seitz (Roger Ebert) questioned “If you retain as much of an original work as possible while reimagining it, is it a gesture of respect or timidity?”  Alex Dudok de Wit (Sight & Sound) wrote: “…essentially it’s just trading on its past.” Jeffrey M. Anderson (San Francisco Examiner): “…the movie might as well end up on a cultural junkpile as viewers decide the original version is all they needed.” Louse Keller (Urban Cinefile): “in the final analysis, there is no roar.” And A. O. Scott (New York Times): “There is a lot of professionalism but not much heart.”

Of course, filmmakers are not just creators, they are also business people.  And they may well get the better of all of us critics – this Lion King is now the seventh highest-grossing movie of all time, earning more than $1.6 Billion as of this writing.  So, young families should probably see this, especially if they haven’t seen the original yet.  But for everyone else, I can only see my way to two stars – and that’s for the technical achievement.  Lion King is a major disappointment. 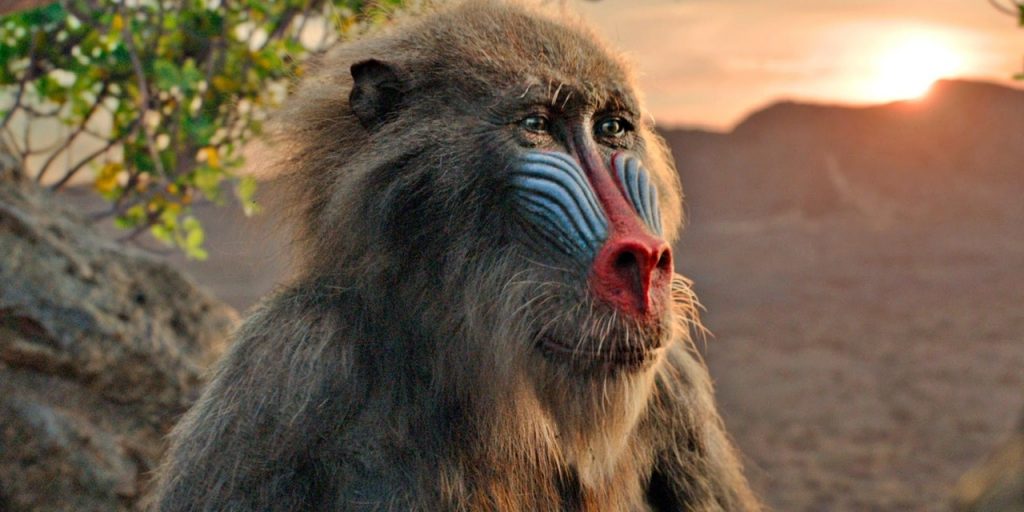