(3 Stars) Just a fun way to spend a couple of hours. 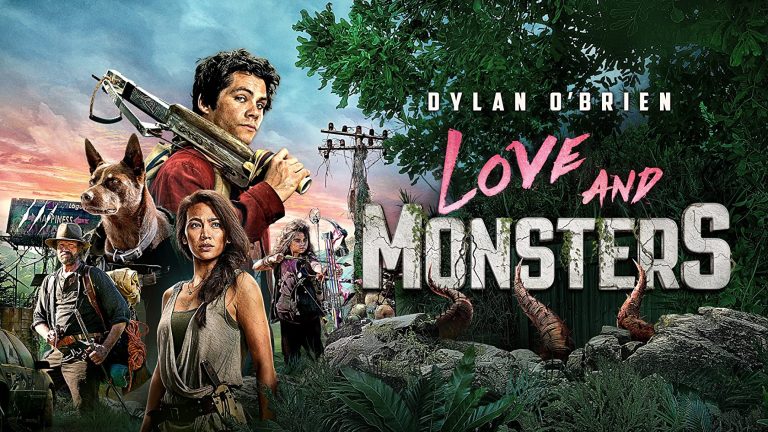 Our second movie in our end-of-the-season Visual Effects festival, is just plain fun.  There is nothing deep about the thing – no interesting intellectual twists; no deeply engaging characters; and a storyline that has been told many times before.  What it does bring to the table is an accomplished technical team who, quite obviously, had a blast putting this film together.

The story is set, like nearly all science fiction films these days, in a post-apocalyptic Earth.  In this case, the catastrophe is caused by our attempts to divert an asteroid from hitting the planet.  We accomplished that, but only by showering the earth with chemicals that had the effect of turning small, insignificant creatures – like snails, centipedes, and frogs – into huge, ill-intentioned versions of themselves, i.e. the ‘Monsters’ of the title.  These monsters, apparently, ate 95% of all humans in short order and forced the remainder to live in underground bunkers. (Yeah, pretty ridiculous, right?)

The ‘Love’ comes from the adventure that takes Joel (Dylan O’Brien) from one of these bunkers to travel to his high school sweetheart whom he has just discovered is in another colony just 85 miles away.  Joel, whose biggest claim to bravery is that he makes a mean minestrone soup, isn’t given much chance of making it in the above ground world.  But, after living seven years in a living arrangement where he is, apparently, the only single person (and not having much sex – that’s a pretty long time to be celibate), decides that getting to Aimee (Jessica Henwick) is worth the risk.

The story then is the tale of his journey.  Early on, he is lucky enough to meet old survivalist Clyde (Michael Rooker) and his delightfully irreverent girl sidekick Minnow (A terrific performance by Ariana Greenblatt).  From those two, he learns much about the Monsters and how to survive on the surface in this new world.  Of course, he ends up getting to Aimee but finds that she isn’t exactly the same as he remembered (Duh!).  He also learns that not all surviving humans can be trusted.  In the climactic scene, though, his skill and cunning survives as he manages to outperform all the bad guys, human or otherwise.  The film ends on an expectedly positive note as most of these hokey movies do.

Technically, this is a well crafted film.  The monsters come to life realistically from a team with backgrounds in movies like the X-Men, Star Wars, Mad Max, Spider-Man, and Matrix movies.  Their creations are detailed and credible – as long as you can imagine a frog as big as the swimming pool he lives in.

Additionally, though, the movie was filmed in New Zealand by the same cinematographer who did Minari, one of this year’s Best Picture nominees.  And the composer, production designer, costume designer, and makeup people have all received previous Oscar nominations.  Somehow director Michael Matthews was able to assemble a very talented team to work the visual and auditory mechanics behind the scenes.  This is especially impressive given that this is Matthews second feature film.

Audiences put this film in the middle third of this year’s pack, while critics were a little less enthusiastic.  MaryAnn Johanson (FlickFilosopher) wrote “This pleasantly silly-sad apocalypse, melancholy with a dash of optimism, smashes cliches and finds fresh angles on the familiar.  Dylan O’Brien has a self-deprecating charm; there’s a great dog, too.”  She pretty well sums it up!

This is not this year’s best film.  The story is fairly predictable and there are no takeaways to leave you thinking about it for days.  But it is light, airy, and has a wonderful combination of surprise, comedy, and adventure.  The visual effects might be too intense for small children, but if the kids are a little older, there is some great family fun.  You can certainly find worse ways to spend two hours, especially in today’s pandemic-clouded world.  (3 Stars)

Available on EPIX/HULU/Paramount +; Netflix DVD; and to Rent on Prime and other platforms