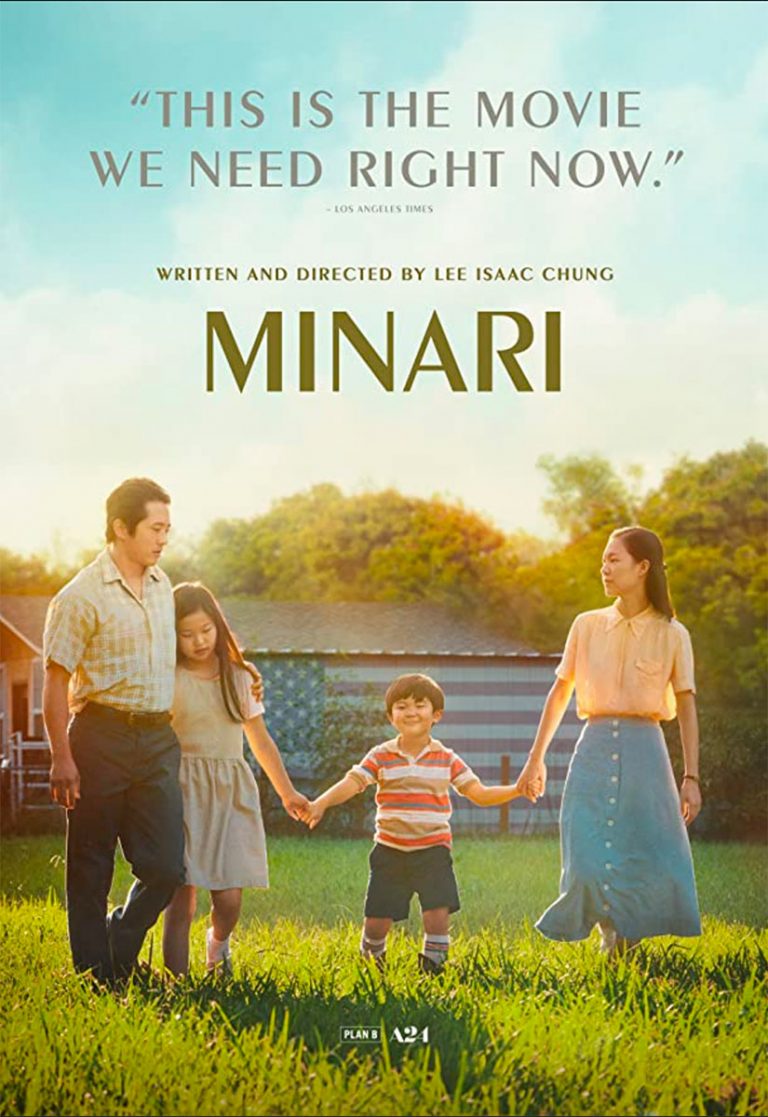 These are the kinds of descriptions the professional critics use to describe Minari.  Generally, critics think very highly of this movie, rating it fifth out of this year’s 41 Oscar-nominated movies (A foreign film, two documentaries, and Nomadland are the only films rated higher!). The positive critical buzz also propelled this movie to an impressive showing at the Oscars with six nominations, including Best Picture and four nominations in the major categories of acting, directing and writing.  Clearly the movie industry is impressed with this film.

But audience reaction is much more restrained, with an IMDB audience rating just barely above average, ranking the movie in 16th place (out of 41).  And that raises, for me, an important question about how to evaluate movies.  This is one of those movies that asks questions of a reviewer like – What is the relationship between ‘technical quality’ of a movie and its ability to move an audience?  If a movie is really a superior work of craftsmanship, why doesn’t the viewing public react more positively?  Is it a sort of ‘elitism’ to argue that that the movie-going public just doesn’t ‘get’ what a nearly perfect movie should look like?

Now don’t get me wrong – just because Avengers: Endgame earned billions of dollars does not mean that it is the best movie ever made.  I get that popular culture and ‘high art’ are not the same thing.  But I’m not sure that is what we are talking about here.  Not everyone is going to watch Minari in the first place – it isn’t advertised as an action-packed blockbuster, so it is safe to assume that people have to actually seek out this movie to watch it.  (It doesn’t help that it isn’t exactly easy or cheap to find and watch it.)  The IMDB audience rating is based only on a little more than 47,000 entries, and there is reason to believe that most, if not all, have seen the movie.  So, I believe, it is accurate to state that a substantial number of people who are actually interested in seeking out this movie did not find it nearly as impressive as the professional critics and the movie industry.

This isn’t the first time I’ve encountered this problem.  Interestingly, it also surfaced with last year’s Best Picture winner, Parasite.  Many discerning moviegoers didn’t fully understand why that picture would take the grand prize.  Sure, it had some interesting moments and some technical gifts, but was the emotional impact on the viewer the most significant of any other movie that year?

Before I continue down this path, let me back up and talk about Minari as a movie.  As do so many movies these days, it springs from the mind of a single person, in this case, writer and director Lee Isaac Chung.  His vision for the movie is highly personal. As in the movie, he grew up on an Arkansan farm.  Different from the movie, he left the farm, went to Yale to study ecology, but dropped out in his senior year to enter the movie industry. His first film, Munyurangabo premiered at Cannes to critical acclaim.  Chung had been wanting to write a movie about his life for a while and finally did following the advice of Willa Cather to ‘cease to admire and begin to remember’.  Perhaps some of the film’s intensity is due to his self-reflection.

Clearly Chung is bringing heavy Korean sensibilities to his film.  And those sensibilities are implemented by the strong Korean actors he has cast.  Steven Yeun made his name originally in the Walking Dead TV series, but has recently found critical success in Korean films such as Bong Joon Ho’s Okja (Bong is the writer/director of last year’s Best Picture Parasite).  In Minari, Yeun portrays Jacob, a Korean immigrant who is trying his best to resolve differences between his Korean background and his American dream of achieving independent success.  He delivers a compelling performance that mixes discipline with feelings for his family.  His work here earned him an Oscar nomination for Leading Actor.

Yeri Han, an unknown to me, is Monica, Jacob’s wife.  I enjoyed her performance as she shows a mix of feelings contrasting loyalty to her husband with uncertainty as she questions whether his choices are really in the family’s best interests.  David and Anne are the two children and David, at least, has some very interesting interactions with his grandma which are important in understanding the intercultural dynamics as they operate on family life.

Yuh-Jung Youn won the Oscar for Supporting Actress for her performance as the grandmother.  She delivers a mix of humor and tragedy as she brings old Korean wisdom to the new American scene.  (She is also famous for delivering zingers in her acceptance speeches raking the white-male industry over the coals for their history of ignoring minority cultures and performers!)

The other academy nomination was for the score and I certainly agree with this one.  With music largely composed by Emile Mosseri with song contributions by Yer Han (Monica), the soundtrack is nearly perfect.  (This was my vote for best score, but it lost, unsurprisingly, to Soul).  In a mix of orchestral and electronic music, Mosseri captures Korean themes in a modern style.  The two songs (Rain Song and Wind Song) where Yeri Han contributed are just beautiful embodiments of their title subjects.  You might want to download this score, it is beautifully subtle.

And there we are back to that word ‘subtle’, which somehow just permeates this movie.  Re -read the review snippets I quoted at the beginning of this review.  Subtle, tender, nuanced, … that’s what this movie really is all about.  There is nothing in-your-face about Minari – no jolts, no real surprises, nothing jarring.  There is a couple of unanticipated events that stir things up towards the end of the movie, but there is nothing here that will unsettle you.

But at the core, this raises the question of what exactly should we expect from a movie?  I remember years ago arguing that a work of art need not be ‘beautiful’ in order to be ‘good’.  I argued that the true function of art was to arouse emotion and/or stimulate ideas and that the value of a work of art was in how successful it accomplished that.  So, for example, a horror flick might be considered terrifically good if it succeeded in leaving the viewer with total disgust.  There doesn’t need to be anything ‘beautiful’ about watching blood pour or guts spill, but if the intent of the film was to arouse disgust, then it is a ‘good’ work of art to the extent it does that.

So what, exactly, does Minari leave us with?  Are we stimulated to action?  Are we driven to intense sadness?  Do we revel in feelings of success?  Unfortunately, I can’t find the feeling in this movie.  It is considered a ‘drama’, but I didn’t cry anywhere during the film (and, ask my wife, I cry at a lot of movies!).  I didn’t leave the film energized to do battle with political conservatives (the Arkansans in this film might be a little biased, but they never actually DO anything bad).  I might have some vague sense of appreciation for what it is like to come to America and try to actually live the American dream.  (But I will leave it to the viewer to determine how successful the film is to create that feeling.)

In the end, I finished the movie and a felt a certain calm.  I think you appreciate this movie much like you might enjoy a fine French wine.  Different from say a robust California Zinfandel, French wines are frequently described with words like ‘balanced’, ‘tender’, ‘nuanced’, and ‘subtle’ – just like this movie.  And one doesn’t, necessarily, drink French wines by themselves – they go beautifully with food, drawing out flavors that you wouldn’t get otherwise.  Drinking a French wine by itself isn’t really a terrific experience, unlike a robust Napa Valley Cabernet or a lush Williamette Valley Pinot Noir.

Technically this movie is just fine.  But unlike a French wine, what are you supposed to pair this movie with so you can draw out all its subtleties?  As a famous commercial asks ‘Where’s the beef?’  I’m probably going to get lots of negative feedback on this one, but I can only summon up 3.5 stars. (But enjoy the music!)

Available on Netflix DVD, To Rent on YouTube/Vudu/Fandango/Apple/Prime 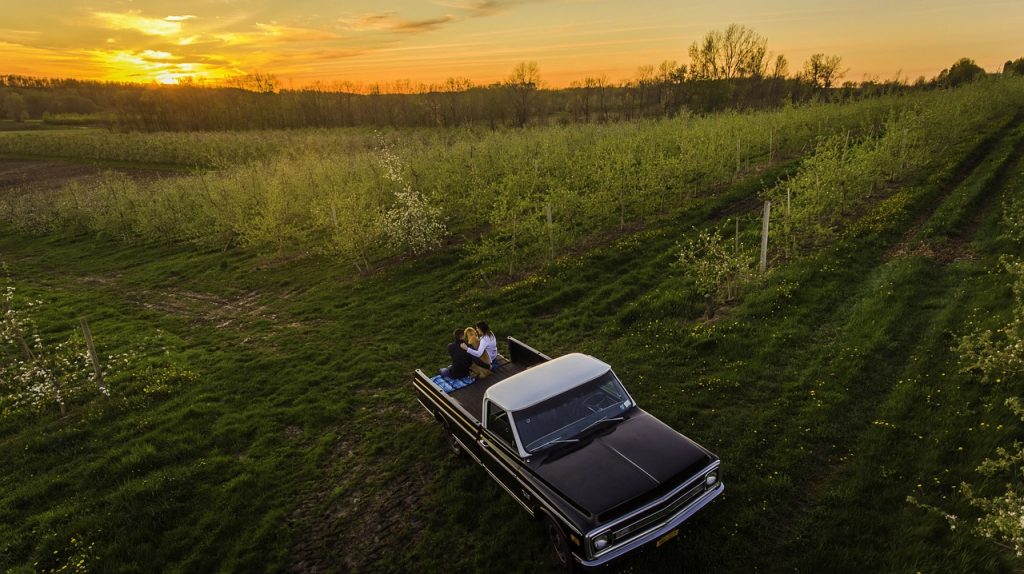