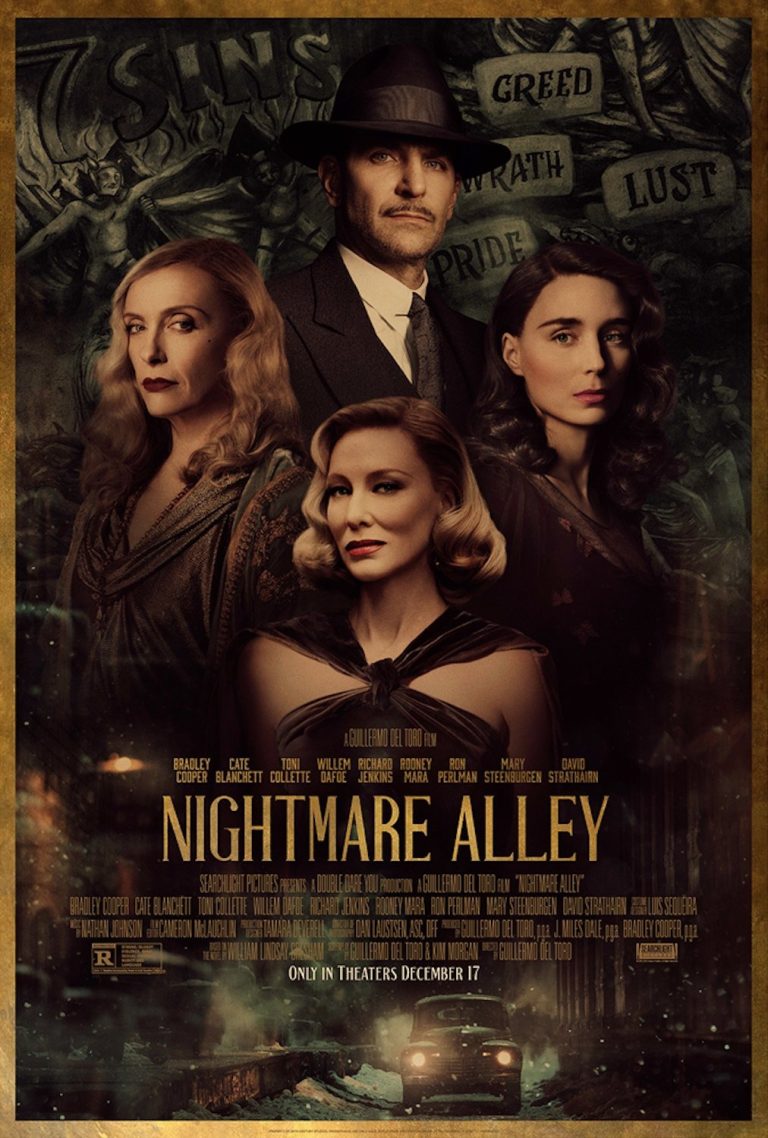 In today’s world, a “geek” is someone who isn’t very socially adept and might be overly consumed with technical things like computers and programming.  For some computer wizards, being called a “geek” might even be considered a badge of honor – a recognition of special technical skill.  That meaning of the word was one I have some familiarity with and even, at times, could embrace as my own descriptor.

But the word didn’t have that kind of positive association back in the 1930’s and 40’s.  While it denoted someone socially marginal, it had a much more severe negative meaning.  It referred, specifically, to someone who was even marginalized within an already marginalized community: people who worked the carnival circuits.  Often found in a town’s “Nightmare Alley”, drunks who couldn’t hold down anything like a real job were employed, usually temporarily, doing the worst of the worst jobs in the hidden confines of carnival sideshows.  A “geek” was a man who would shock audiences by doing the indescribable.

“Geeks” are front and center of Guillermo del Toro’s recent Best Picture nominee, Nightmare Alley.  Based on a book of the same name by William Lindsay Gresham, del Toro has given us a beautifully rendered but deeply disturbing picture of the lives of troubled people.

Nightmare Alley shares many of the features of his 2018 Best Picture winner The Shape of Water, namely lush attention to period details, and a cinematography that mirrors the period of time being portrayed.  This time, del Toro, with the same Oscar-nominated team of cinematographer, costume and production designers from the earlier film, has recreated a perfectly set film noire.  Darkly filmed, with mostly single-light sources, he fills his sets and clothes his actors in golds and greens that accent the lushness of the time.  He sets the story as a mystery, giving us only so many clues at a time, as we piece together this psychological thriller.

And psychology reigns supreme.  Freud was huge in this time period and psycho-analysis was all the rage.  Personal problems were thought to ultimately channel back to Oedipal or Electra complexes (depending on what your sex was), and this film is full of them.  In fact, the main characters all seem to have long-standing issues with their parents, especially their fathers.

But then, as one father-figure (Pete) puts it, guessing that people have father-issues is a pretty good guess.  It is, as he puts it, a “black rainbow” – something that everyone will be able to relate to, even as it sounds very specific.  And the movie hinges on that at almost every turn.  So, whether you are a mentalist like the protagonist Stan, trying to con your mark in a stage performance, or a Freudian psychologist like Lilith trying to… well, just what is  it Lilith is trying to do? – I will leave that to the viewer.

Stanton Carlisle is our main character.  Even though he doesn’t say a word for the first 15 minutes or so of the movie, we follow his every move and learn a great deal about him.  Pay particular attention to these scenes as much of the movie is foretold here.  (Oh, and also pay attention to “watches” throughout the film – they are also important!). Stan is played by Bradley Cooper.  (Although I didn’t like his role, or his performance in Licorice Pizza, he did a fabulous job in American Hustle, A Star is Born, and Silver Linings Playbook, receiving Oscar nominations for all three of those movies.)  Here he gives a stunning performance where, as Carlos Aguilar (RogerEbert) wrote he “works magic with an unassumingly sensational turn that maps the trajectory…from dubious naïveté to deranged confidence and ultimately pitiful resignation.”  Cooper understood his character so well that he nailed the final, crucial, scene on the first take.

Stan runs through women quickly.  His first spoken words are in a scene with Toni Collette, as Sheena, the Seer.  A carnival worker herself, she gives Stan a bath and a bit more.  But he doesn’t stay with Sheena long before he is courting Molly, played with a great combination of nearly childish acceptance and worldly knowledge by Rooney Mara.  Molly and Stan seem to hit it off and, it would seem they might make a great couple, but for Stan’s insatiable ambition.

So, eventually, Stan meets his match in Lilith, played with calculated cunning by Cate Blanchett, one of my favorite actresses.  Lilith harbors secrets that are only hinted at, and, while we want to know more, this story is about Stan, not Lilith.  What we do know is that Lilith is a clinical psychologist practicing her own understanding of father problems.  Freudian psychology is no longer in favor, but in the 30s and 40s it was considered the real thing.  A critical part of this movie is understanding the Stan/Lilith relationship, and who might be conning who?  One reviewer (Manohla Dhargis, New York Times) – who apparently doesn’t like Blanchett- argued that she “isn’t a character, she is a cineaste’s nostalgic plaything…”. But I think Blanchett does much more than “drape herself over the furniture”.

Cooper, Blanchett, Mara, and Collette are just a few of the Oscar-nominated actors in this film.  Willem Dafoe, Richard Jenkins, Mary Steenburgen, and David Strathairn all have terrific supporting roles.  (And Ron Perlman is there too as Molly’s surrogate father-figure!)

However, none of the actors, nor director/writer del Toro received Oscar nominations for this film, the only Best Picture nominee that failed to earn any other “major” nomination.  In some ways this is surprising, because it is unusual for a Best Picture nominee to make it into the top category based only on credits in the technical categories.  But I think I understand what happened.  In the first place, this is an adapted screenplay, based on a book by a writer who isn’t known for much else than this one book.  So del Toro was limited as to just how far he could go with the script and still stay with the source material.  (Note: This is the second adaptation of the book, the first was a movie of the same name starring Tyrone Power and released in 1947.  That version – due to motion picture codes –  was even less true to the novel.)

Second, and perhaps even more important, is that this is a very complex story.  Filled with twists and turns, based on characters that are already marginal to society anyway, and telling a story that follows an unknown character from uncertain origins to an ignominious conclusion is a tough story to tell.  Del Toro’s film isn’t perfect, by any means.  But it is an ambitious effort.  Even at two and a half hours, I found myself following every line, not knowing at all where we were going to end up.  If you like edgy psychological thrillers, you should see this film.

I suspect that del Toro, to a certain extent, also considers himself a sort of “geek”.  We often think that we are far from any of that – certainly a long way from a carnival notion of the word.  But maybe we too can be found in our own version of “Nightmare Alley”. 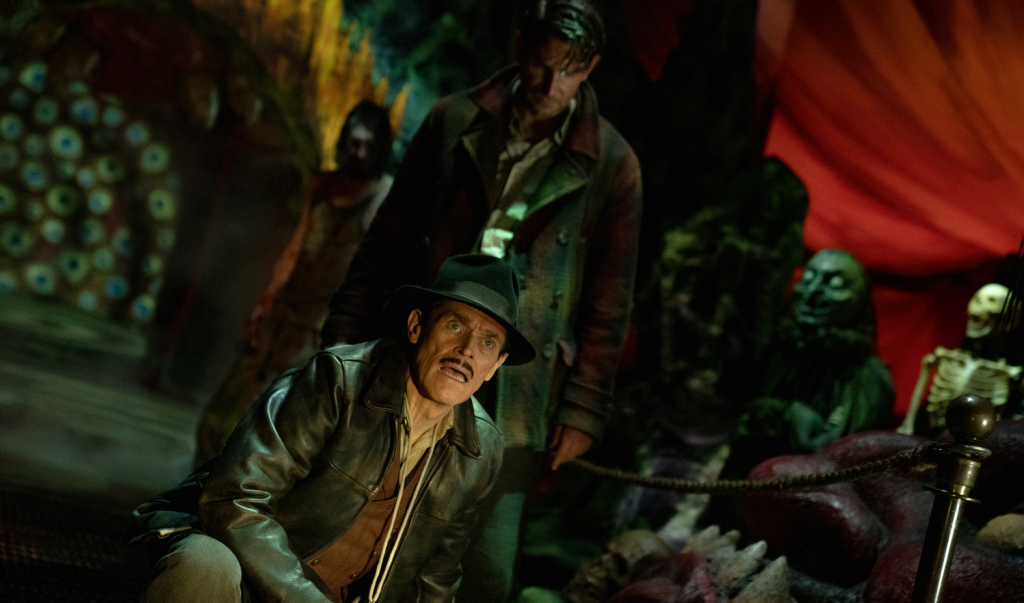 PrevThe Lost Daughter
Being the RicardosNext