(3 Stars) Fine family entertainment, but not up to Pixar’s best! 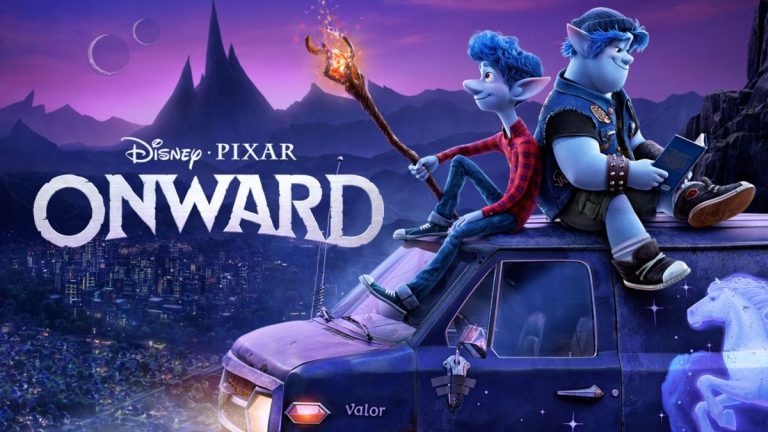 This year we get not just one, but two Pixar computer-animated feature films.  Soul won the Oscar and, in my earlier review, I thought the film deserved the award.  Now I’ve re-watched the film Onward, another Pixar film competing, with Soul, not just for box-office and streaming dollars, but also awards recognition.  While it is definitely a good film, and worthy of your time, it isn’t in the same league as Soul, or any of the other Pixar masterpieces, like Coco, Inside Out, and Up.

Pixar’s best films do more than project stunning animation.  They also tell multi-layered stories that can appeal to family members of all ages.  Little kids like the cuddly characters and the fantasy worlds; teens often appreciate the references to family struggles and the difficulties along the journey of “growing-up” and the barrage of pop-cultural references; and adults like the subtle humor, the recognition of how difficult it is to juggle adult responsibilities, and the contrasts between innocence of childhood and the impermanence of life itself.   You will find all these threads tightly bound in Pixar’s best films giving us not just robust sensory experience, but also intellectual and emotional satisfaction.  Soul, Coco, Inside Out, and Up all give us those things and they are top notch films.

Onward is not in that same category.  And it’s not that it is a bad film – it is fun, moderately stimulating, and has an emotional ending that will likely bring tears.  It’s just that it doesn’t leave you with much to chew on the next day.

Disney has been criticized for decades now for constantly reworking the theme of the young girl, often a Princess, who is missing her Mother.  In Onward, Director/Writer Dan Scanlon drew on his own past to invert genders on this theme and explore how boys grow into men in the absence of their natural Father.  Ian Lightfoot, apparently like Scanlon, is a skinny and awkward teen whose father died suddenly before he was born.  He and his older brother, Barley – who is almost Ian’s opposite and is exploring his options in a post-secondary school “gap year” – have an opportunity to bring their Dad back for just one day so Ian can meet him, and Barley can refresh some fading memories.

The story-line is what happens when this effort doesn’t go quite right, they only get half of their Father – the non-speaking part at that – and they attempt to fix the problem using whatever resources they can muster.   The problems compound until not only are their own lives in jeopardy, but so is that of the entire town. Their Mom and a couple of other characters end up assisting, or hindering, their efforts.  In the end, the brothers learn something significant and, of course, grow up more in that one day, than over the last several years.  Part of that growing involves understanding just how important siblings are, and that is, perhaps, the big moral lesson in this film.

The reason Ian and Barley can even consider such a quest is because this isn’t exactly a normal world.  In what is perhaps the most fascinating part of this film, this is a world that, formerly, was full of magic.  And, in fact, The Lightfoot family is a family of elves.  In an aside that could have been the basis for an entire movie, the inhabitants of this magical world, all non-human, decided to give-up magic for the benefits of technology.  Because magical abilities were unevenly distributed, they decided to give up its practice and democratically distribute the bounty of technology on all inhabitants alike.  So, in this world, pixies ride motorcycles, a centaur is a cop and the boy’s stepfather, and everyone communicates with smartphones.  Magic wasn’t lost entirely, however, as the partial resurrection of their father shows and a Dungeons and Dragons theme seems to pervade life in this world, providing rich sources of metaphors, characters, and plot lines.  In many ways, I think this could have been a better movie if they had developed this layering of cultures in more depth.  (Of course, then it might not have appealed to kids quite as much.)

There are recognizable voices behind these characters.  The brothers are played by Marvel characters Spider-Man (Tom Holland) and Peter Quill (Chris Pratt).  Julia Louis-Dreyfus voices their Mom, Laurel, and Oscar Winner Octavia Spencer is an outrageously dynamic Manticore.  The chemistry between these four was evident, but, unfortunately, not fully developed – the two women, especially, stole their scenes and we could have experienced more of them.

Of course, the computer animation was almost perfect and the music was well done and totally appropriate.  But this film seems to have tripped over itself.  In trying to send a particular message, it ended up ignoring its best features.  Pixar might want to look at some of these elements and characters to see if there is an entirely different movie in there.  For family audiences, this film is just fine.  For those looking for something bigger – it just isn’t here.

(I mentioned in the first paragraph that we “re-watched” this movie.  After the first few minutes of our recent viewing, we realized that we had seen this movie before, with our granddaughter, just after it was released, before the pandemic shut theaters down.  I’m afraid it says something, about my faltering memory as well as this movie, that we didn’t remember it. 3 Stars)