(3 Stars) The film doesn’t hang together real well, but there are some great songs and terrific visuals. 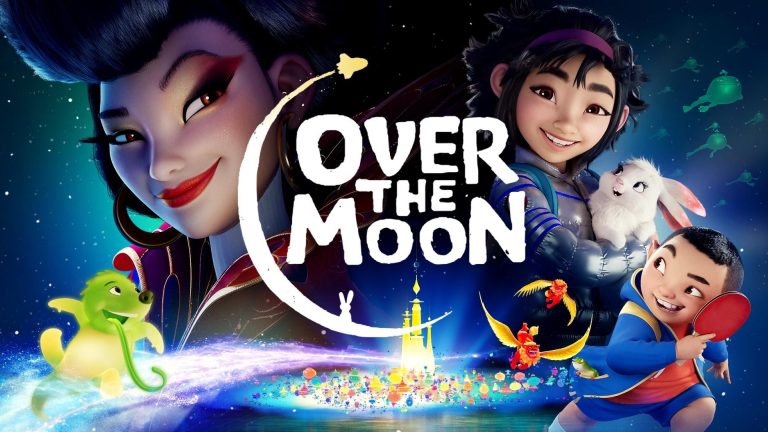 Over the Moon has a lot of good things going for it – and a lot of things wrong with it.  It didn’t fare too well with either audiences or critics, coming in about seventh from the bottom of all 41 Oscar-nominated films.  Despite understanding much of the criticism levied against this film, I have to say that, generally, I enjoyed it a bit more than my fellow critics.  While it certainly isn’t the best film of the year, it isn’t the worst either.

Surprisingly, it compares, structurally, with this year’s winner in the Animated Feature category, Soul.  Like Soul, Over the Moon has two distinct universes: one taking place in the real world and the other in a fantastic world populated with an almost bewildering set of shapes and sounds, none of which have much to do with what is going on in the other world.  In Soul, the real world is set in New York City where a character suddenly dies and is transported to the afterworld.  There he meets strange characters and encounters unusual situations which the filmmakers use to explore just what might be happening after we pass on.

The real world, in Over the Moon, is in a Chinese village – the movie is a co-production of a Chinese company and Netflix – where a young girl is struggling with the death of her Mother and the possibility that her Father is ready to move on to a different companion while she isn’t ready for a new Mother.  Fei Fei (the young girl) doesn’t die and go to the afterworld, but instead builds a rocket ship which takes her to the moon where she meets the mythical goddess Chang’e who, according to Chinese mythology is mourning the loss of her own love.  Fei Fei thinks that, with Chang’e’s help, she will be able to at least postpone, if not stop, her Father’s pending remarriage.

In both films, the real world is presented with incredibly detailed settings and the animation, probably computer assisted in both cases, is amazingly precise and realistic.  Pay close attention to the baking scenes where Fei Fei works in her family’s business making Mooncakes.  The details are clear and the color schemes are earthen tones and pastels.

And then, also in both films, the alternative worlds are much simpler in form and shape, but much more vivid in colors and abstract in movement.  On the moon, the world of Luminaria is populated by strange beings with shape-shifting qualities, but also of intense colors.  Real world physics is, of course, suspended there as characters do things you would normally not expect.  Like in Soul (or in the movie that pioneered all of this, 2001, or Fantasia if you want), I found myself being absorbed into the kaleidoscope of imagery and transported into other realms.  (BTW: No mind-altering substances were employed, at least, not on my part!)

It isn’t just the visuals that entrance the mind – there is also the music.  Over the Moon uses terrific examples of new music, mostly from songwriter Christopher Curtis.  He wrote eight songs that are used in this film and all of them are really good examples of music merging genres of hip-hop, pop, rock, and stage in sometimes foot-stomping, heart-throbbing moments.  In particular, I really liked the song “Ultraluminary” sung by Chang’e when we first meet her.  Coupled with a beautiful costume (designed by Guo Pei, a Chinese fashion designer), that song serves as a terrific introduction to the character and is a high point of the movie!.

Soul, too, had great music – both in the jazz themes and the electronic score.  But, and here we are starting to get at why Over the Moon falters, the music in Soul feels integrated with the message and with the story, while it isn’t in this film.  Joe is a jazz musician and so his involvement in music is integral to the storyline.  Fei Fei, on the other hand, is a kid more interested in pre-teen rocket projects and fairy stories that, somehow (explained only by magnetic levitation) carry her to the moon.  While billed as a ‘Musical’, Over the Moon does a much worse job integrating the music, even if it is good, into the movie’s structure.  The songs provide wonderful, but isolated, moments of aural beauty that don’t compound to build the movie as a whole.

Over the Moon is a production from Glen Keane.  He used to work for Disney/Pixar on projects like Tangled, The Incredibles, Beauty and the Beast, and Monster’s Inc.  And he was named a Disney Legend in 2013.  Then he, apparently, left Disney and went over to Netflix.  They, in partnership with a Chinese firm, have now attempted to port over so many of the Disney themes and methods, that Over the Moon becomes sort of a hodgepodge of homages to his former employer.  There is a castle on Luminaria that looks suspiciously like Disney’s and, of course, the theme of the dead Mother is a Disney idea that goes back generations.  As Brian Tallerico writes “Too much of this feels calculated to mimic something that worked before, lacking the spontaneity and artistry of great animation.”

And there you have it – there are some wonderful and beautiful moments in this film – stimulating visual elements and some terrific music.  But the movie lacks a coherent structure, the message is disjointed, and the elements are either unoriginal or lacking depth.  Its good if you don’t have anything better to watch. (3 stars)