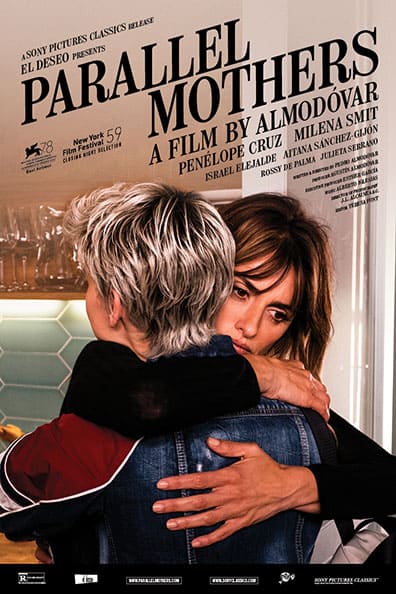 Parallel Mothers tells a story of two women who give birth the same day at a hospital in Madrid.  Written and directed by Spain’s premier filmmaker, Pedro Almodovar (Talk to Her, Pain and Glory), it contains many of his signature traits including a script full of twists and turns, the color red, and, of course, Penelope Cruz.  The story of how the lives of these two mothers come together, are torn apart, and then reunite again as changed people, is told with tension and plot twists that turns the film almost into a thriller.

Cruz, one of the world’s most gorgeous women and an accomplished actress, receives her fourth Oscar nomination for her performance as the older of the two mothers.  (Nine, Vicky Cristina Barcelona, and Volver were her previous Oscar vehicles)  Now in her late 40’s Cruz delivers a confident performance that is one of her best yet.  Her reactions when she learns shocking information are tightly contained but with displays of powerfully felt emotion.  Although presented with unimaginable realizations, her reactions all seem perfect to the situation.  Her nomination was well deserved.

The other mother is played by a newcomer to the movie world, Milena Smit.  Just 25 years old when the movie was released, she doesn’t have much of a resume yet, but will likely grow into future roles.  Playing the younger mother, she is clearly learning much from her older partner, both in the story and on the set.

And so the movie is about these two mothers, their baby daughters, and, to some degree, their own mothers. It is an interesting story that, unfortunately, I can’t tell much of without spoiling some of its pleasures.  Let us just say Almodovar weaves a script that has many of the same kinds of twists that we saw in last year’s Pain and Glory. Of that film I wrote “the movie’s dramatic success is found in this text of weaving back and forth between all these different threads…”.  His team includes many people who have worked on his films before, including the composer Alberto Iglesias whose nominated score registers the surprises and twists of the plot while remaining politely in the background.

As much as I liked the story of the two mothers and what happens to them, and despite all the good things I said above, I really can’t give this film a positive review.  And that’s because Almodovar has chosen to actually do two movies here and they just don’t come together.  One movie is pretty good right up until the last twenty minutes.  But the last section of the film properly belongs in an entirely different movie, probably a documentary.

Francisco Franco ruled Spain with an iron fist from 1939 til his death in 1975.  He secured his dictatorship ruthlessly by executing and killing as many as 200,000 Spaniards who espoused “Republican values such as regional autonomy, free elections, socialist leanings, and women’s rights.” (Source: Wikipedia).  Although he didn’t align directly with Hitler and Mussolini during World War II, he provided indirect support and his fascist leanings were pretty clear.  It was only towards the end of his life that he relaxed his hold on the country, reinstating the monarchy and naming Juan Carlos I king.  (It was Carlos that moved Spain more into the democratic column of national political systems.)

That was a jarring paragraph, right?  And you should honestly ask me why I put in a miserable history lesson into a review of a movie about motherhood.  That is the same question you’re going to ask about this movie.  Almodovar didn’t just develop a movie about Parallel Mothers.  He also had a political axe to grind.  Janis, Cruz’s character, becomes pregnant after hooking up with a “forensic archeologist” whose work is to uncover the graves of some of those 200,000 disappeared Spaniards so they can be properly memorialized.

I suppose all of that is well and good – people have to work and using jobs to have people meet works pretty well in movies.  But the last part of any film is supposed to wrap up the story and give some closure to the tensions developed.  In Parallel Mothers, though, the ending becomes the beginning of an entirely different film.  From what I’ve read, Almodovar’s intent was that the destruction of so many families during Franco’s rise to power was to explain the complex family situation of the two mothers’ families.  But, maybe it takes being a Spaniard to get the connection, but I don’t see it.  The last twenty minutes of the film concentrates on digging up ten skeletons of men who were killed by Franco from Janis’s home village.  While interesting, it has nothing to do with the story of the two mothers, and its inclusion is just as jarring as my paragraph about Franco.

I understand that there is a tragic, and mostly untold, history left behind by Franco’s regime.  But it isn’t the tale being told in this film.  Parallel Mothers is, mostly, a terrific story and told well, but Almodovar took the beginning of an entirely different movie and tacked it on to the end of this one, ruining the movie and adding an unnecessary twenty minutes.  While I really liked his Pain and Glory, I can only give this film 2.5 *.

Stream on STARZ, rent on Prime Video, NetflixDVD, or wherever you get your discs! 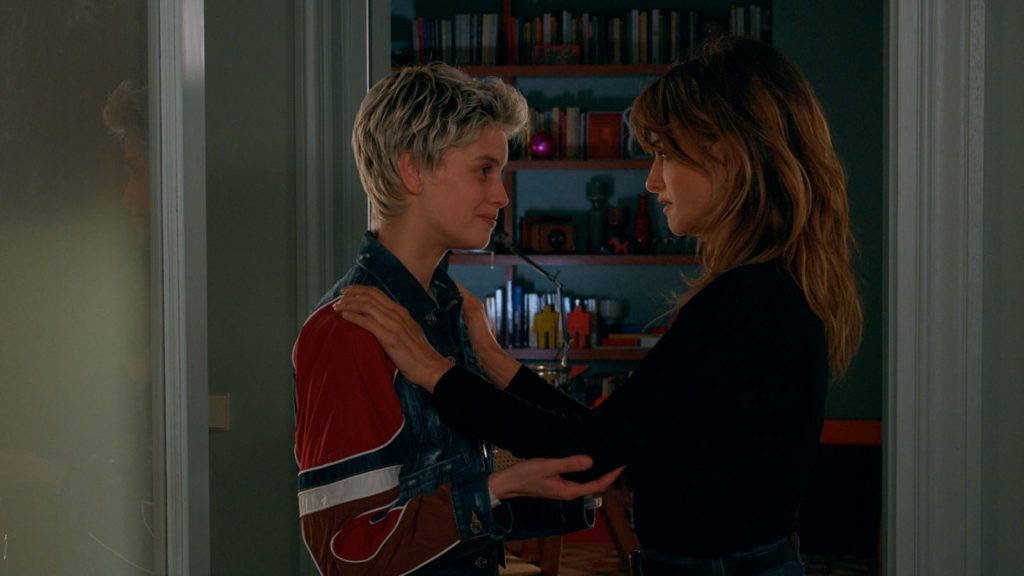