(5 Stars) Probably the best movie of the year and a great example of excellence in all dimensions. A must-see film. 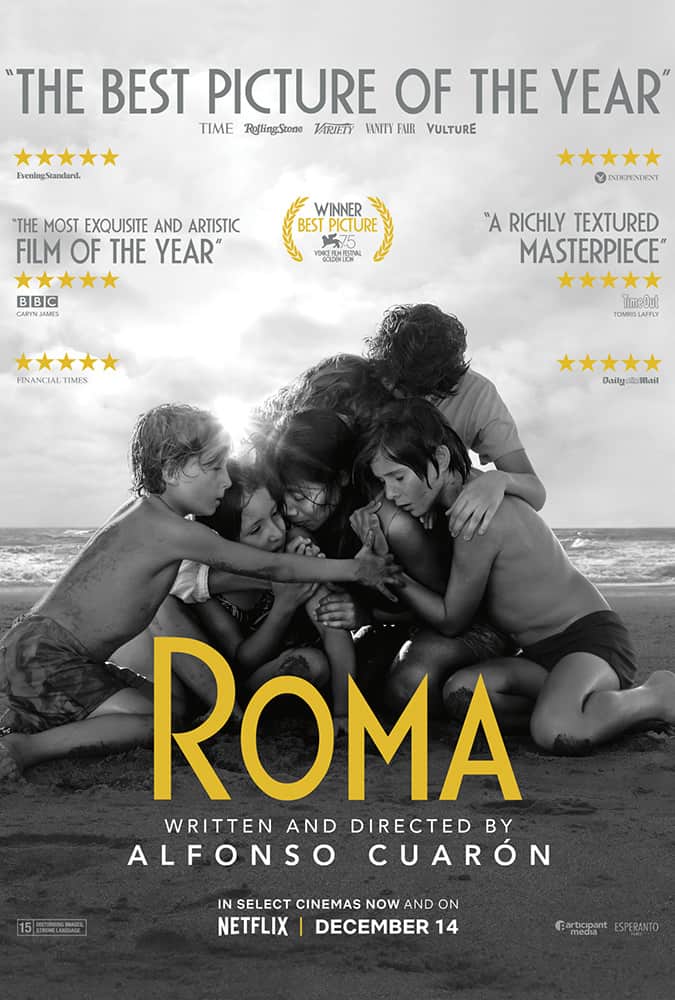 It isn’t all that unusual for a movie to receive ten Oscar nominations. This year, The Favourite tied with Roma for that recognition and The Shape of Water, last year’s best picture winner, received thirteen. But it is unusual for a foreign-language movie to receive that many. Perhaps, in recognition of our sorry political times, the Academy wanted to send a message that not all Americans are hateful to things, or people, from south of the border.

Or maybe this original movie from Netflix productions simply deserves the recognition. Roma exhibits high levels of artistry in multiple movie-making arts and sciences. While this is the first of this year’s Oscar movies I have screened, I am going to go out on a limb and say it is probably one of the best of the crop.

Four of the ten Oscar nominations for Roma are for the work of a single person, the producer, writer, director, cinematographer, and editor, Alfonso Cuaron. Cuaron should be recognized as one of contemporary film’s heroes. Over the last two decades, he has received ten Oscar nominations – for Y Tu Mama Tambien, Children of Men, and Gravity (three terrific movies) as well as this year’s Roma – and has won two Oscars for Directing and Editing Gravity in 2014. He was the first Mexican (and Hispanic) to win the Directing Oscar.

He brings intense characters, slow moving cameras, and wide-angle panoramic views to all of his films, and we see those characteristics mature in this movie. Roma is full of beautiful black-and-white imagery and tightly edited transitions. Even though the film is all in shades of grey, the images are crystal clear, the result of using digital cameras. The scenes are marvelously framed and the slow-moving camera, even on long takes, keeps the level of expectation high.

But he is not the only nominee for this movie. Yaritza Aparicio received a leading actress nomination for her role as Cleo, but she, of indigenous (Mayan?) origins, fell into this role as she awaits a teaching position after getting her degree in early childhood education. Marina de Tavira received a supporting actress nomination for her role as the mother, presumably modeled after Cuaron’s mother. However she is best known as a Mexican stage and TV actress, not a film actress. (That the only two acting nominations are for women isn’t really surprising since the men in this story are totally bereft of character of any kind and truly embarrass menkind everywhere.)

As good as their acting might be, though, for me, the story-line in this movie is not really the point. ‘Roma’ is a neighborhood in Mexico City, and in fact, is the neighborhood where Cuaron grew up. Cleo, the middle-class family’s maid, is based on the maid in Cuaron’s childhood, and to whom the movie is dedicated, Libo . And the conflicts in Mexico City in the early 1970s are the stuff of recorded history. But the real focus of this movie is not so much the characters in it, but the feeling of what life was like at this time and in this place. Despite how well these two actresses did, they are, ultimately, secondary to the camera work and the staging in this movie. It is the imagery that excels here and makes this movie so powerful. For that we have to give credit to the imagination, and technical skills, of Alfonso Cuaron.

Although there is no musical soundtrack, the aural experience in this movie is also intense. In addition to a nomination in production design, it was also nominated in the two sound categories, mixing and editing. We not only see life as this family experiences it, but we also hear it – the sounds of dogs barking; water on the floor, in a washtub, or on the beach; airplanes flying overhead at several moments in the story. The movie is awash of visual and auditory experiences.

As I thought about this movie, I kept coming back to another movie, the best picture winner of last year, The Shape of Water. Although the stories are entirely different, the two movies end up creating similar emotional effects. Both of them do a powerful job of communicating just what movie-making can do when it is at its best – the magic of creating empathy by enriching the senses. This is a must-see movie and has an extremely good chance of winning best picture. (In case you can’t tell, I give it 5 stars.)