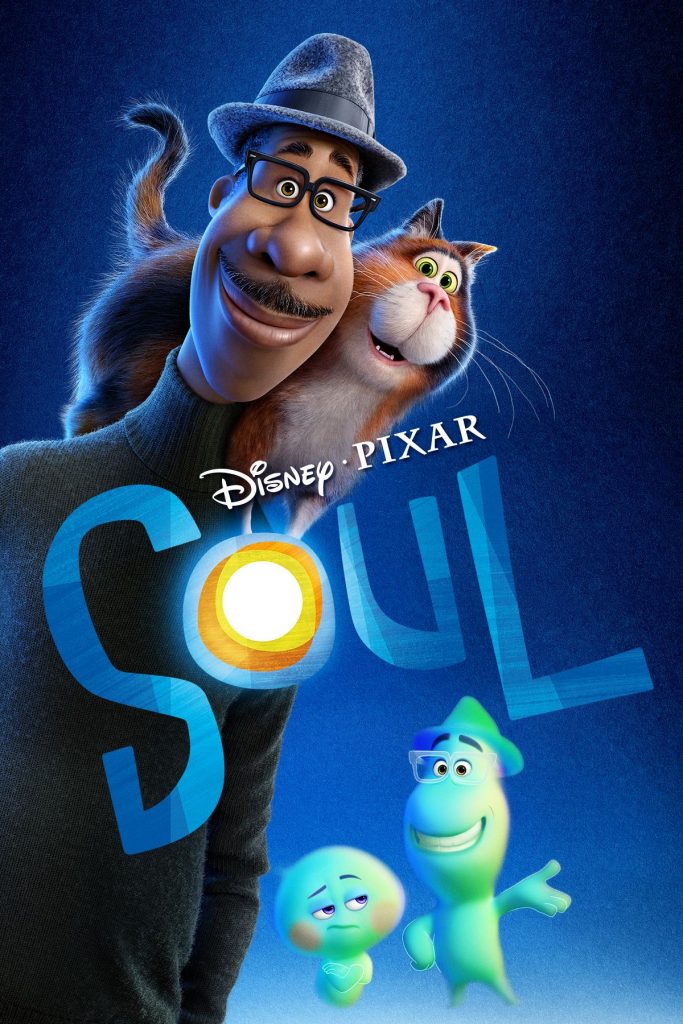 Demographers estimate more than 108 Billion human beings have inhabited the earth since we became something recognizable as human.  That number (actually the number 108,210,121,415) figures in this movie and, I’m guessing, that will surprise you a bit.  What does the number of human beings that have populated this planet have to do with a movie about jazz?

If you are as naive as I was, you will come into watching Soul with the notion that it has something to do with uniquely American musical genre of jazz and maybe its origins in our rich Black cultural history.  You will probably expect lots of references to New Orleans and southern history and the oppression of slavery.  Throw in quotes from jazz greats like Duke Ellington, Ella Fitzgerald, John Coltrane, and Billie Holliday, and maybe you get a really good appreciation for the rich background and straightforward beauty of jazz music.  I was really looking forward to that kind of experience, although I wasn’t quite sure how they were going to do it in the form of an animated movie.

If you are as naive as I was, then you are in for a real surprise and, I think, an extremely pleasant one.  Soul strikes amazing cords as it extends the exploration into the areas of the unknown in strikingly thoughtful and beautiful expressions.  Once again, Pixar/Disney has composed a nearly-perfect composition and given us an unforgettable experience.

Yes, about half of the movie has to do with the musical form of jazz.  The story is about Joe (Jamie Foxx), a musician, not in New Orleans, but in New York, who teaches middle school band students.  However, that isn’t really what he wants to do. Instead he dreams of playing jazz piano in nightclubs, his real passion.  Early in the movie he gets a break and it appears that his dreams are about to come true.

Except they don’t.  As with most of us, something happens to Joe that changes his life trajectory.  And with that, we end up in the other half of the movie – The Great Beyond, The Great Before, and The Zone.  The great pleasures of this movie are here – in areas that probably can only be explored in an animated film.  Here we aren’t dealing with people but rather their essence, their ‘souls’.  This movie, quite literally, explores notions of where they come from, where they go, and what, exactly, we might do with them while ‘living’.  And these aren’t trivialization – there is substantial food for thought here, or should I say nourishment of the soul!

The film navigates back and forth between these two worlds with great finesse.  The New York world is rich in detail and visceral experience.  (One critic argued that the depiction of the New York urban scene is the best ever, at least in an animated feature.) It is also accompanied by the terrific jazz music of Jon Batiste, an accomplished keyboardist, originally from Louisiana, but now producing superb jazz music in New York.  Joe is Black and he represents the first time Pixar/Disney has attempted, realistically, to depict Black people in animated form.  They have great success in portraying the various Black skin textures and colors, adding to their human palette of characters.

When Joe is in the ‘other’ world, he is recognizably himself, but adopts a visage that is befitting of the ‘soul’ community.  And it is pretty hard to quibble with the design – I mean, what exactly does a ‘soul’ look like anyway?  But the animation in this world is simpler, uses pastel colors, or black and white, and why not?  The complexity here is not in the visual presentation, but in the strange concoction of ideas and processes that souls undergo as they transition from one stage to another.

The other distinguishing characteristic of the ‘other’ world is the music.  Instead of Jon Batiste’s jazzy improvs, we get the electronic music of Trent Reznor and Atticus Ross (also nominated this year for the score for Mank, and winners of the score for The Social Network).   The ethereal and cerebral tone of this music is so soothingly appealing, that it is difficult to imagine a better choice to represent this world.

The preparation of souls for their adventure on Earth is particularly interesting – and gets a special treatment in this movie when two souls transition to Earth but end up in bodies they weren’t intended to occupy.  In addition to Joe’s soul, there is also Soul #22 (Tina Fey).   (22 has a wonderful line: “You can’t crush a soul here.  That’s what life on Earth is for.”) Since these souls are numbered, imagine how long ago that this one has been waiting around waiting for a ‘spark’ to get into a body.  When 22 and Joe finally do go to earth, the resulting ‘switched identity’ sequence goes on a bit too long, but is an important part of the story.  In the end, there is a definite message to this film, but I’ll leave it up to you to tease it out.  I suggest, however, that you learn the lesson early, and well.

I’ve been a fan of the Pixar movies for many years now and the yearly release almost always ends up in my top four or five movies of the year.  I can’t reinforce enough that ‘animated feature’ does not mean ‘kids’ movie.  I began to appreciate that about a decade ago when I watched Up, a movie that focused on an elderly man who has lost his wife and, through the magic of animation, manages to take his house into the air for some adventures in South America.  Sure, the movie had some kid appeal, but it was also about how us older folks deal with loneliness and mortality.  (Although I’ve never been able to actually levitate my house and go on the road, I did buy an RV trailer a few years later…)

Pete Docter, the man who mostly wrote and directed this movie, has been with Pixar for years and also spearheaded the development of another critically important animated feature, Inside Out.  That film explored the role of emotions and especially, the value of sadness as part of the human experience.  While it was, ostensibly a film for children, it resonates well with us so-called adults.  And, finally, another Pixar film in this same vein is Coco.  Not only did Coco present the Hispanic American culture in beautifully positive light, but it also introduced the theme of death and the concept of moving between those worlds.  So, my point is, that animated films, especially many of those from Pixar, are not fluffy Saturday cartoons for children.  Rather they delve into deep topics that should, appropriately, challenge children and adults alike.

Yes, I loved Soul and I heartily recommend it to all my adult friends.  But I was curious about how a child might react.  So I went to my ‘child expert’, my granddaughter Annabelle.  I was curious whether she got the same things from the film that I did, so I (via her Mom) asked her what she thought the film was about.  My eight-year-old grandchild responded that it was ‘about confidence and enjoying the little things in life.’  She agreed that it was similar to Coco, but liked the music better.  As usual, she said more in a few short sentences then I said in this entire essay…

So this is an incredible movie, but I find one big flaw.  I’ve commented about how it is almost two different movies – the New York City jazz scene and the ‘other world’ scene.  Each has its own visual and musical style and while the characters do transition, they behave differently because the worlds are so different.  What I really wanted to see, and to hear, is a more direct linkage between these two worlds.  I think the relationship between the essence of jazz – the harmony found in life’s spontaneity- and the essence of ‘spark’ could have been illustrated more directly.  (Maybe by more overtly repeating musical themes?!?). Nonetheless,it is still an outstanding movie.  For this reason I give it 4.5 Stars.

Available on Disney + and Netflix DVD

And to Rent ($20) on Apple/YouTube/Vudu/Google/Amazon 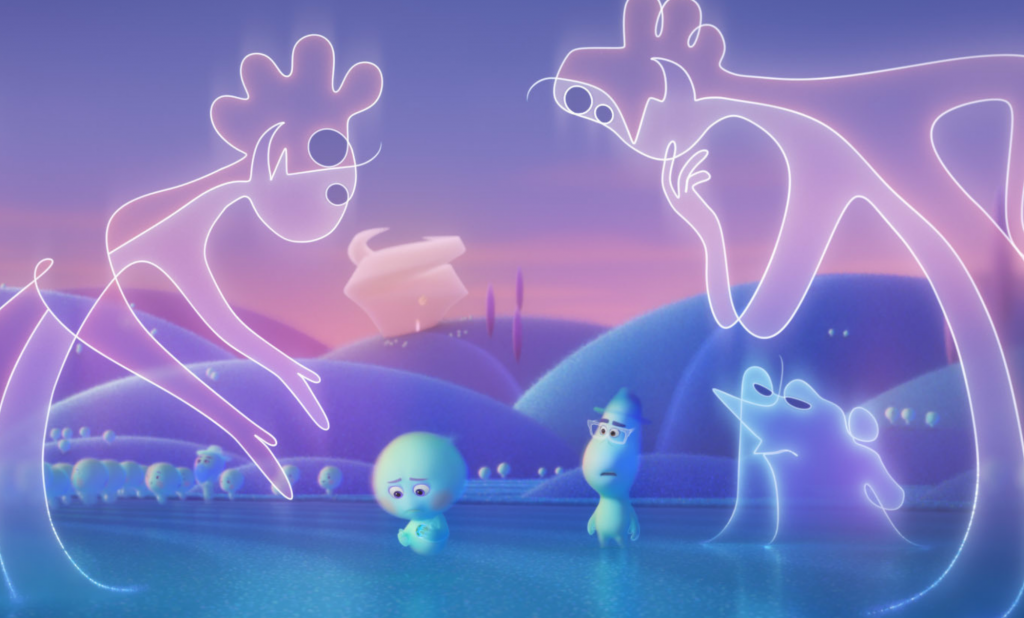 PrevMank
Trial of the Chicago 7Next