(4 Stars) A look at a troubled man and a tough time in Hollywood. 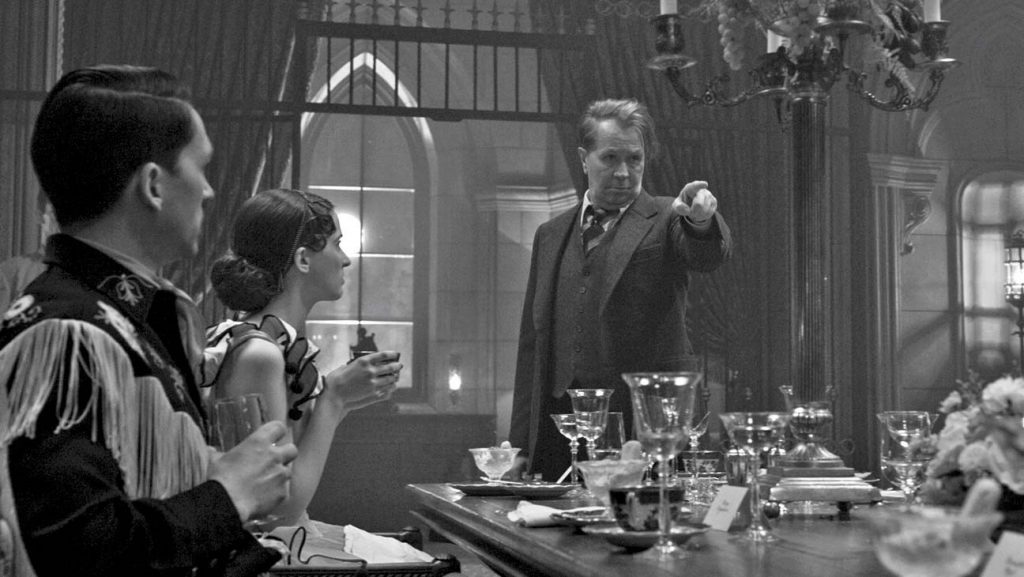 Citizen Kane is considered by almost everyone as one of the best movies of all time.  Metacritic ranks it at the top in a collection of eight movies that it gives a ‘perfect score’ of 100.  I understand that Rotten Tomatoes, having recently uncovered a negative review of the film just dropped the movie from 100 to 99%.  It is considered a benchmark for critics in evaluating movies ever since and, reportedly, has had a profound influence on moviemakers, especially people like Alfred Hitchcock, Francis Ford Coppola, and Stanley Kubrick who have also made highly ranked films.  At the 1942 Oscars, the film was recognized with nine nominations including Original Screenplay, Best Actor (Orson Welles), Best Director (also Orson Welles), Best Picture and several ‘technical’ categories.

Interestingly, though, the only Oscar it won was for Original Screenplay and that was awarded jointly to Orson Welles and Herman Mankiewicz.  Orson Welles was fairly well known in radio after producing The War of the Worlds broadcast that scared half a country to death.  Later he made a bigger name for himself as a producer, director, writer, and actor participating in multiple films over four decades starting in the 30s.  His films have rarely done well at the box office, but have received generous response from the critics.

This film, Mank, is about the other guy, Herman Mankiewicz.  Originally a New York newspaperman who moved across the country in the twenties just as Hollywood was becoming an industry.  He made a fortune for himself and became head of Paramount’s screen writing department.  (Its a Wonderful Life is one of his earlier successful films.) Unfortunately, as seems to happen to many successful people for whatever reasons, he became highly cynical about the industry and the people in it and turned to heavy drinking to ease his pain.

Mank tells the story of how Mankiewicz wrote the script for Citizen Kane and, by flashback, how he became cynical and alcoholic.  Mank received ten Oscar nominations, more than any other nominated film, but, curiously, it did not receive a nomination for screenplay even though it is the writing of an Oscar-winning screenplay that it is all about.  Partly that might be because the screenplay was written by Jack Fincher, the director’s father, who actually died 18 years ago. (He has also never written any other screenplay.) So the Mank screenplay has been sitting around for nearly two decades waiting to be made.  The director, and son, David Fincher, peddled the idea for years to various studios but had certain ideas about how it was to look.  Those ideas were viewed as largely unacceptable until Netflix, known for disrupting the industry anyway, agreed to back the deal.  And so the film was finally made, as a testimonial to the director’s father as well as a tribute to one of the world’s greatest movies.

The movie’s vision comes from the mind of director Jack Fincher who was nominated for this movie as well as the Social Network and The Curious Case of Benjamin Button.  He is also known for thrillers like Se7en, Zodiac, and – one of my favorites – Gone Girl.  His penchant for dimly lit rooms, strange points-of-view, and shocking reveals comes through marvelously in this movie.  The Production Designer, Costume Designer, Sound Team, Composers, the Makeup Team, and Editor all worked with Fincher on at least one or two of these other  films, and they also all received Oscar Nominations.  Clearly Fincher’s team has a lot of experience working together and it shows in the well crafted product they produced.

Fincher’s technical vision for the film, assisted by his old team and newcomer Erik Messerschmidt (Oscar winner in cinematography)  was to make it look and feel , as much as possible, like the movie that inspired it.  So, even though it is filmed digitally, it was converted to monochrome/ black-and-white.  He wanted it to look so authentic that he added the little circles in the lower right corner – indicating time for a reel change – even though there are no reels!   (Still there is a lush creaminess to the visual texture that is probably not period-accurate). Although state-of-the-art sound recording technology was used to record the movie, it was recorded in a monaural sound track, because that was how it was done in the early 40s.  And the sound was intentionally degraded, adding pops and hisses like an old vinyl record.  Although the composers (Reznor and Ross) are usually noted for their electronic-music scores, for Mank they used only instruments that were available at the time.  Much of the film was made at the Kemper Ranch in Victorville, California which is exactly where Mankiewicz wrote the original script. And the Oscar-winning production design team went all out to create sets and scenery that accurately conveyed the Hollywood of the 1930s.  Technically, the movie fires on all cylinders and was rewarded with six nominations and two Oscars in those categories.

I enjoyed all the technical aspects but that isn’t what I enjoyed most about this film.  Instead it was the sometimes comical, but often tragic portrait of the man that it painted.  Gary Oldman played Mankiewicz – apparently without makeup.  (He won the leading actor Oscar three years ago portraying Winston Churchill in Darkest Hour, and did a great job in that role.)  As Mankiewicz, Oldman delivers yet another fine performance.  He conveys the great wit of the man as he composes biting commentary.  But he also bares his soul as he struggles to make sense of what has happened to himself in the industry that he struggled to love.

Yes, Mankiewicz did well for himself in the early years of Hollywood.  But as the industry matured, it went in directions that he wasn’t at all happy with.  As the depression took hold, he witnessed the panic of capitalists and their destructive reactions.  He believed that the film industry had more than an obligation to just make money by peddling block-busters.  He believed that, through films, Hollywood could help actually make peoples’ lives better.  He revolted against the greed of the studio heads, and it pained him, in one scene in particular, when Louis B. Mayer is asking the company staff to take pay cuts, while avoiding entirely a question of whether his own salary will be reduced.  Indeed, the entire origin of the script for Citizen Kane may well be his expression of angst and injury at the influence of William Randolph Hearst and his newspapers in spreading false information about the ‘socialist’ opposition in the form of Upton Sinclair.  (Is there anything familiar about that?)

His reaction wasn’t entirely constructive, of course.  Mankiewicz’s alcoholism was well known.  And the final dinner-party scene is a masterful monologue that ties everything together but probably couldn’t have happened without the social lubrication of being drunk.  The movie suggests that the script for Citizen Kane is entirely the work of Mankiewicz – Orson Welles really had little to do with it except for providing a location and two months to write it.  Mank considered it his finest work.  He wrote one more Oscar-nominated screenplay the following year (The Pride of the Yankees), but not much else and died in 1953 at the relatively young age of 55.

The film paints the man as somewhat cold and very bitter.  Mankiewicz was married and fathered three children, but the film doesn’t show much of his family and our takeaway is that they didn’t play a big role in his life.  His only significant involvement with a woman is a platonic relationship with Marion Davies, Hearst’s mistress, played very well by Amanda Seyfried.  While her role in this film is to soften the rough edges somewhat, he remains a crusty cynic.

It has been noted by several critics that this isn’t exactly a love letter to Hollywood.  Perhaps that is the reason why it took a non-Hollywood company (like Netflix) to finally bring it to life.  But Hollywood, like any industry, has its dark sides and we shouldn’t be afraid to explore them.  We need to appreciate this history, especially as the pandemic is changing everything we know about how films are made, distributed, and viewed.  So film aficionados should see this movie to better appreciate a critical period in the evolution of the industry – and its impact on today.

Not everyone will like this film, though. Joan, my wife, didn’t, saying that there was no-one in the movie she could relate to – no-one with any real positive values.  If you require a movie to have at least one person you can identify with, then you may not like this film.  From my perspective, though, life is full of interesting but not necessarily sympathetic characters.  Mank is certainly one of them.  See the movie for that. (4 Stars) 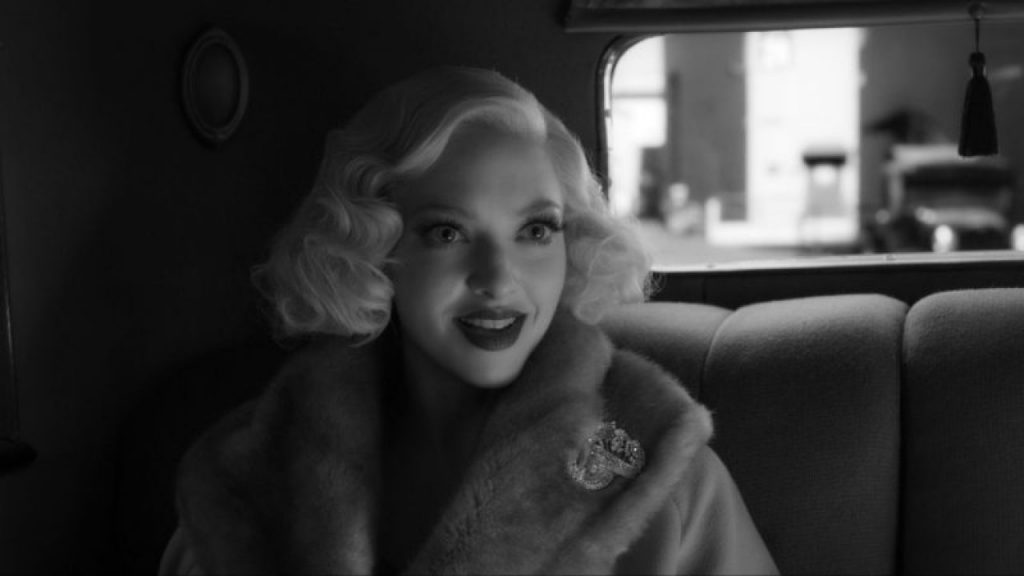