Three Musicals this year - Rocketman is probably the best. 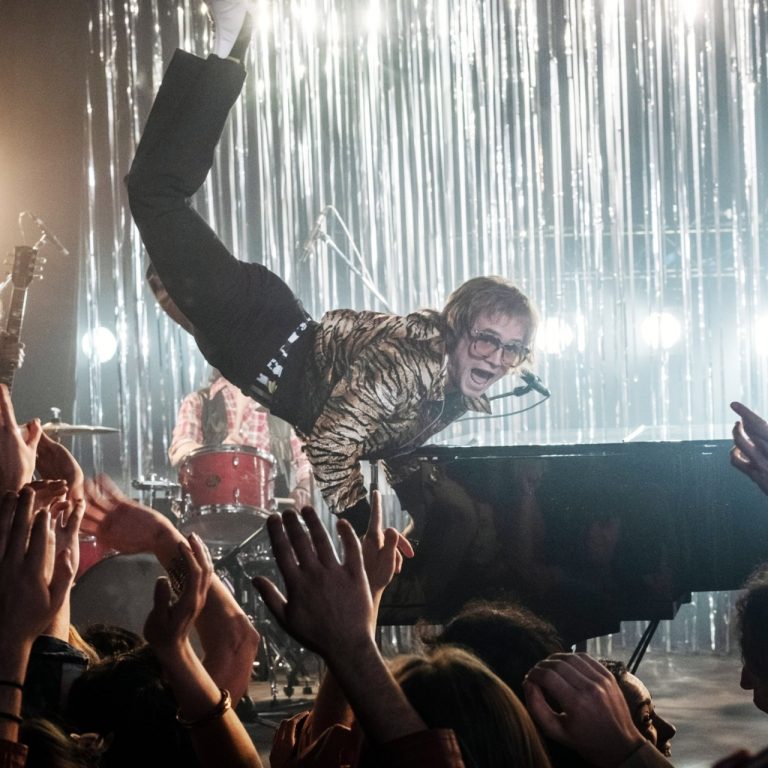 There are three musicals in this year’s Oscar movies, two of them are animated films and Rocketman is the lone live-action entry.

Rocketman is a biopic of Elton John’s battle with fame and success – and the seemingly necessary sex and drugs that comes with that in the music business – his struggles are told through a playlist of more than twenty of his best songs from the 70s and 80s. The music might be the best reason to see this movie, and John’s life story adds context to the songs, giving them even more meaning and value.

Taron Egerton plays John and gives a credible singing voice to the many songs.  The costumes are terrifically exquisite going beyond, if that is possible, what John even wore as he performed.  The performance at the Troubadour in L.A., which is seen as the beginning of John’s success story in America, is told in a delightfully exaggerated way, but this is part of the movie magic. John wrote a special song for the movie and he and Egerton sing it together, but not until the ending credits.  The song, “I’m Gonna Love Me Again”, won the Oscar for best Original Song. (I argue in my review that this is cheating, since the song isn’t in the movie itself!)

Frozen II also contributed a song to the Oscar race, “Into the Unknown”, and there are several original songs in this animated musical, a sequel to the 2013 blockbuster, Frozen.  In this follow-up, the two sisters Anna and Elsa (Kristen Bell and Idina Menzel) sing their way to uncovering the origins of Elsa’s mysterious powers.  In doing so, they uncover family secrets about what happened to their parents as well as correcting some serious environmental problems in a distant land.  The sequel didn’t do as well as the original, which of course, isn’t unusual.  Still, the computer generated imagery is spectacular, portraying the northern world in autumn and in darker shades to fit a more somber theme.  (Pay particular attention to the animated snowflake scenes.) Lovers of the first Frozen might be a little disappointed in the sequel’s emotional power, but the music is entertaining and the highlighting of girl-power is important for kids to see and feel.

This year’s Lion King is also a musical and attempts to recreate the characters and story of the original Lion King film, with new songs and updated technology.  Unfortunately, neither work very well.  The songs are flat and uninspiring, unlike the original.  And, unfortunately, the CGI is so powerfully good that it is almost impossible to tell that these animals are animated instead of real.  While that might not sound like a problem, it definitely becomes one when they start talking and singing – it is just too jarring a contrast and the movie fails because of that.

So, if you like musicals, and especially rock music, then you have to see Rocketman.  If you have small children, then add Frozen II, if for no other reason than to keep the kids occupied for a couple of hours.  You can probably skip Lion King under any circumstances.

Last year’s (2019 Oscar season) musical movies were Mary Poppins Returns and the Ballad of Buster Scruggs.  The latter movie is a Coen brothers film and, as such, is a horse of a different color.  Yes at least one of the six vignettes making up the movie involves singing, but unless you like violence, you probably aren’t going to like this movie – it is only incidentally a ‘musical’.

And then, in regard to Mary Poppins Returns, I asked ‘Who asked her to?’.  The movie will be entertaining for family viewing, but none of the songs come close to ‘A Spoonful of Sugar’.  So watch this one at your own risk.