The Power of the Dog

(4.5 Stars) Quite likely the Best Picture of the Year. Let me explain why. 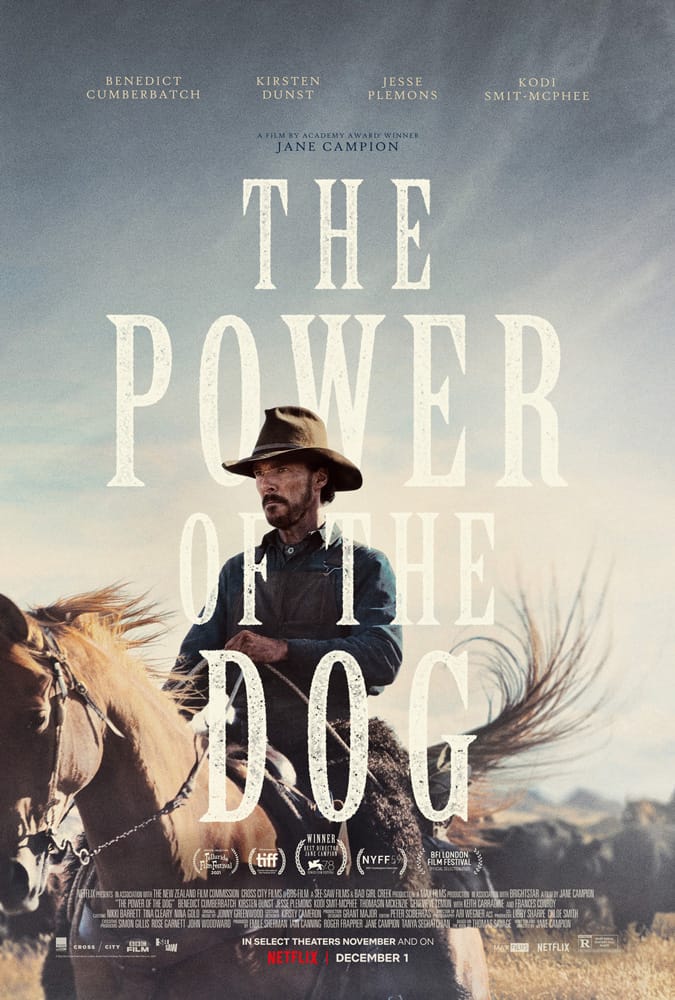 The Power of the Dog is moviemaking at its best.  This film allows us to identify exactly what it is that makes a good movie and why some are better than others.

One expectation of a good movie is that it must stimulate the senses – you want a movie to register in the ears and eyes in stimulating and pleasant ways.  The Power of the Dog is a full-on visual and aural delight.  Filmed in New Zealand, the movie makes excellent use of broad panoramic vistas from sweeping lush plains, to shadowed hills, and craggy mountains.  The incredibly open and richly colored scenery is captured well by the young Australian cinematographer Ari Wegner.  She brings to this film her knowledge and love of the ‘down-under’ countryside to terrific effect.  And when she switches from broad panoramics to intense facial closeups the contrasts are intense, enhancing the tightly coiled emotion behind their faces.

An extremely important component of the visual element is the work of the production designer who is responsible for the look and feel of the sets and the locations.  Grant Major, who is from New Zealand, was Oscar-nominated for his work in the Lord of the Rings trilogy (and won an Oscar for one of the films.). Clearly he knows New Zealand and was able to provide locations that, while definitely New Zealand, could also be seen as Montana in the 1920s – the setting for the story.  His creation of the Burbank ranch house is a master work of details that identify the complex characters – there is a chessboard at the same time there are massive animal trophies.  And note the bedroom for the Burbank brothers which sums up the cramped nature of their relationship.

But we don’t just see this movie, we also hear it.  The sound team (which includes an Oscar Winner for Hacksaw Ridge) does a wonderful job in not just creating the sounds of a western cattle ranch, but also in perfectly balancing the  mix between natural sounds and dialog – in contrast to so many films, you can understand what people are saying to each other.  And you can’t ignore the soundtrack from Jonny Greenwood who was trained as a violist but also played guitar for Radiohead (and was also nominated for his score to Phantom Thread). His music moves, like the characters, from sharp moments of dissonance to pleasant resolutions.  His soundtrack is absorbing without being domineering, which is what you want in good movie music.

And then there is the way all the pieces are put together.  Film Editing has been cited as perhaps the movie-making skill that is really the guts of a good film.  A poorly edited film leaves gaps in understanding and jolts in moving from one scene to another.  But nominated editor Peter Sciberras keeps The Power of the Dog moving at the pace that its characters and the story require, often with scenes seeming to melt into each other.

Regardless of how the story is told, the key to any good movie is to have a story that the viewer can follow easily and to engage with.  ‘Engagement’ can take many forms and in The Power of the Dog the nature and strength of that engagement changes over time – something I found especially compelling.  The movie seems to start as a conventional Western – set in Montana and involving two very different brothers who own and work a cattle ranch.  As the story unfolds, though, we find that this isn’t going to be like a typical John Wayne western.  (And I suspect that part of the reason this film received such negative audience reaction – rating in the bottom third of this year’s nominated movies – is because it doesn’t deliver a traditional western experience.  It might also be because Benedict Cumberbatch isn’t playing a Marvel superhero).

Instead, this film is really a very powerful psychosexualdrama housed in a western setting.  The story is based on a 1967 novel (which I haven’t read) by Thomas Savage.  It is my understanding that the movie strips the book down to its basic elements, and that is one of the major strengths of this film – the economy of expression is so subtle and understated that all the pieces just fall into place.  The screenplay was adapted from the book by Jane Campion who is also from ‘down under’ (and received a BA in Anthropology the year after I got my undergraduate degree, partially in the same field).  Although she created, wrote, and directed much of the mystery/thriller TV series Top of the Lake, her movie credits have been nonexistent for over a decade.  In the Oscar world, you have to go back to 1994 when she won the Original Screenplay Oscar for, and was nominated for directing The Piano, a triple Oscar winner.  (Interestingly, a piano figures prominently in The Power of the Dog).

Perhaps age also brings some wisdom, but I believe Campion’s vision for this film is near perfect and her script and direction (both nominated) are going to be difficult to top this year.  By paring the novel down to its essentials, and communicating that to her actors, she is able to put together a remarkable story that captures the essence of quality film making.  In just over two hours, she weaves a complex tale of developing characters and a story that is always just a tad undisclosed.  I suspect that many viewers never get the intellectual and emotional puzzle that she weaves here – I know I didn’t figure it out completely until the next day.  And I love films that do that to me – I like to be left with a challenge that I have to think about.

As I write this, I’ve been going back and forth with just how much to tell the reader without introducing spoilers.  It is probably fully public knowledge by now that the movie involves homosexuality (although no sex acts, of any kind, are portrayed).  And I suspect that this kind of content, especially in a ‘western’ is part of the reason the public reaction is so negative.  But remember that the novel, on which this film was based, was written long before Brokeback Mountain which kind of opened the door on this theme.  But, ultimately, I’m not sure that the story really depends on that.

You might ask what, exactly, is ‘the power of the dog’?  In the first place, there are several dogs in this story, and they all help give clues to the story.  There is a real dog that Phil Burbank (Cumberbatch) whistles away from Peter when Peter tries to play with him.  There are dogs involved in the herding operations.  There is a particularly important dog seen in the hillsides, whose visibility is a test of just how important a character might be ( and how carefully the viewer is paying attention – look for shadows!!).  And, of course, ‘the dog’ might just be a metaphor, as it was in Psalm 22:20 when Jesus, on the cross, and after saying “…why hast thou forsaken me?…”, goes on to say “Deliver my soul from the sword; my darling from the power of the dog.”  I’m not going to pretend that I can interpret the Bible, but I believe ‘the dog’ in this passage refers to those who have, unjustly, persecuted him.  But I’m not sure exactly who ‘my darling’ is.  In the movie, though, there is perhaps more to establish the references.  In particular, pay very careful attention to the first lines from the movie’s Peter.  (Oh, and also you might want to note how a particular MacGuffin (i.e. gloves) works its way into the script.)

So we have an amazing story and some wonderful visual and aural elements to help tell it.  But a story doesn’t work without characters and, in The Power of the Dog, there are four important characters – and all four actors were nominated for their roles.

The story starts around two brothers, Phil (Benedict Cumberbatch) and George (Jesse Plemons).  These two are about as opposite as you can get and a huge part of this movie is appreciating the differences in these two characters.  Cumberbatch (who was previously nominated for his leading role in The Imitation Game) might be better known for his various Dr. Strange movie roles.  But here, he is much cooler.  Despite Phil’s outrageously masculine demeanor (he easily castrates bulls – something Cumberbatch actually learned on a Montana ranch), he also harbors some surprising past secrets.  He is a bundle of contradictions – he attended Yale and can read the Greek and Roman classics, and yet he can go weeks without a bath, “I stink and I like it.”  Cumberbatch pulls off a very difficult character with amazing sensitivity and intellect all at the same time.

The other three main characters are all, basically foils, for the Phil character.  George can’t possibly compete with his brother and doesn’t try.  But he shows remarkable resolve when he actually leaves their childhood bedroom for a real wife.  Rose Gordon (Kirsten Dunst) is taken with George, but is no match for Phil’s need to destroy his new found competition for his brother’s attention. Dunst does a wonderful job showing the conflicts of her situation and the humiliation of being constantly demeaned.  And then there is Peter (Kodi Smit-McPhee) who is Rose’s son.  The dynamic between Peter and Phil is the heart of the story and so Smit-McPhee’s performance is unusually good if only because of its subtlety and understatement.

The Power of the Dog is a well-balanced Oscar movie because it received a large number of nominations in both the ‘major’ and ‘minor’ categories.  With five nominations in the technical categories, it is an excellent example of how to tell a story.  And with both a directing and a writing nomination, it is clear that there is a terrific story and vision of that story propelling the film.  Finally, with four acting nominations, the film gets the characters right.  So, what else do you want? – this is definitely Best Picture material and a wonderful movie to watch.  I recommend this film to all – it is about as perfect as we are likely to get this year.  I loved this movie. (4.5 Stars – and not 5 only because it is the first movie of the year!)