(3.5 *) Technically near perfect, but lacking in the dramatic storytelling. 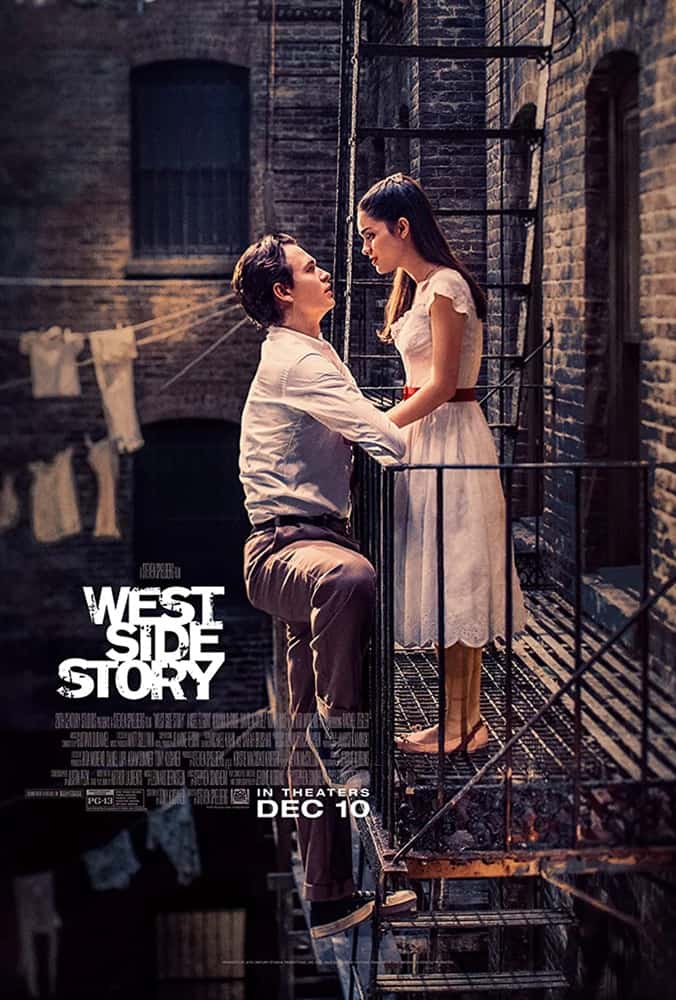 West Side Story is a modern remake of a 60-year-old movie that was a remake of a play that was, originally, a play by William Shakespeare called Romeo and Juliet.  (I could continue the regression, because it turns out that Shakespeare borrowed the plot line from two even earlier sources which, in turn based their stories on an ancient Italian romantic folk tale).  But the point of all that history is that it is a classic tale of two would-be lovers who, because of social constraints, are tragically unable to fulfill their romantic destiny.  It is so enduring because of its  inherent conflict between individual desires and the group values that both channel and constrain them.

Retold as dramatic plays initially, the story found expression on the stage and  made its first film incarnation in the movie of the same name by George Cukor in 1936.  After the emotional stranglehold of the Depression and World War II, Broadway found a powerful outlet in the stage musical and started a nearly two-decade run of powerful productions from the late 40s to the mid-60s.  Rodgers and Hammerstein, Irving Berlin, Kurt Weill and others churned out popular and critical successes like Oklahoma, Annie Get Your Gun, Gentlemen Prefer Blondes, South Pacific, The King and I, Damn Yankees, My Fair Lady, and The Music Man all before 1958.

In 1957, Jerome Robbins (concept), Stephen Sondheim (lyrics), Leonard Bernstein (music), and Arthur Laurents (book) collaborated to develop the Romeo and Juliet story in a decidedly American way. They set it in contemporary New York City, and retold in the format that was then sweeping the New York cultural scene – a Broadway musical.  Instead of two Italian families, the social context was the conflicting demands of New York’s ethnic neighborhoods, thrown against each other by the uprooting demands of postwar American progress.  The love of the two main characters was still the main plot line, but the decisive forces that prevented their union, and ultimately their tragedy, was the battle between ethnic groups that were both facing terrible displacement by the changes in their neighborhood.  By turning it into a musical, the terrific music and sophisticated dance scenes provided a remarkable emotional contrast to the otherwise dark themes of the story.

Hollywood, probably seeing dollar signs, decided this would be a good addition to their own stable of musical movies, which were also taking off at the time.  Robert Wise brought on Robbins and the two of them adapted the stage musical to movie format and released the first film West Side Story in 1961.   Even with a budget, substantial at its time, of $6 million, the film was a smash success earning $44 million in box office revenues and 10 Oscars, the fourth highest-number of wins ever (behind Ben-Hur, Titanic, and Lord of the Rings: Return of the King with 11 each).  If you haven’t seen it, it is worth your time to find it and spend an evening with an old classic.

But it had its flaws.  Although it won Oscars for its Supporting Actor (George Chakiris) and Supporting Actress (Rita Moreno), neither of the leads – Natalie Wood and Richard Beymer –  were even nominated.  Roger Ebert, reviewing this classic in 2004 wrote: “West Side Story remains a landmark of musical history.  But if the drama had been as edgy as the choreography, if the lead performances had matched Moreno’s fierce concentration, if the gangs had been more dangerous …, if the ending had delivered on the pathos and tragedy of the original, there’s no telling what might have resulted.”  In short, a musical success, but not so good as a romantic tragedy.  And, really, isn’t that what the original Shakespeare play was all about?

So, now fast-forward fifty years or so to the mind of one of Hollywood’s icons, Steven Spielberg.  For years, he has been spinning his magic in films ranging from Jaws (1975), Indiana Jones and the Raiders of the Lost Ark (1981), Schindler’s List (1993), Munich (2005), and Lincoln (2012).  I didn’t bother to try to count the number of films he’s been involved in, but he has been nominated for 19 different Oscar awards and has taken home four of them.  And, despite his prolific history, he has always wanted to do a musical; and it so happens, that he’s had a tickle for West Side Story for many years.

With a budget of $100 million, he brought some of his favorite people into the production.  Tony Kushner wrote the screenplay and had previously worked with Spielberg on the scripts for Lincoln and Munich.  Cinematographer Janusz Kaminski won Oscars for Schindler’s List and Saving Private Ryan, both Spielberg movies.  Spielberg’s Production Design team had previously received Oscar nominations for his movie Bridge of Spies.  And the Sound Team has, between them, received nominations for more than 30 films (many of them Spielberg films), including a half-dozen wins.  In other words, when Spielberg brings a team to a movie, he brings a big, talented, accomplished group of people and you should expect an extremely well crafted movie.

Technically, Spielberg’s West Side Story lives up to those expectations and more.  The sets, trying to re-create the development of Lincoln Center 60 years ago, are about as perfect as you can get.  The cinematography with exquisite combinations of tracking shots, overhead cameras, and up-close portraits is all nearly perfect.  The choreography fits the moods, and the songs are all just as you want and expect them to be.  As Brian Tallerico (modern day RogerEbert.com)  notes: “The camera doesn’t just capture action on a set – it glides with the performers.”  A. O. Scott (New York Times) reviewed “It’s a dazzling display of filmmaking craft that also feels raw, unsettled and alive.”

BUT (you sensed a ‘BUT’ coming, didn’t you).  The problem is not with the dancing, or the music.  The problem is with the drama – the romance and the tragedy.  Notice the nominations for this movie – once again, neither of the lead actors were nominated.  Only Ariana DeBose (playing Anita) received a nomination for Supporting Actress.  In the 1961 version, Rita Moreno played this role and she received the nomination and the Oscar for Supporting Actress.  (Spielberg brought her back but, sixty years later, she couldn’t exactly play a teenager, so he created a new role, Valentina, Tony’s employer and landlord.  Apparently Moreno was tremendously supportive of DeBose in her role and, possibly, that extra boost accounts for DeBose’s inspired performance.

One of the complaints about the casting in the original film was that they used perfectly ‘white’ actors to portray LatinX characters.  Let’s face it, Natalie Wood does not look like a Puerto Rican and applying layers of darkening makeup still won’t make her one.  So Spielberg deserves credit for demanding that all LatinX characters be portrayed by LatinX actors.  His casting of Rachel Zegler (one of 30,000 people to audition for the role) as Maria was near perfect.  She not only can sing the songs (Wood was dubbed), but she looks Puerto Rican because she has Puerto Rican heritage and, born in 2001, she is legitimately young enough to inhabit the role perfectly.  Apparently Zegler is a known singer, but I can’t say I know her.  However, she is not an actor – this is her first feature film.  While, given all that, she does admirably well, and we will be seeing her again for sure, she is still young at the acting game and needs some seasoning.  There were times where her performance seemed just a tad too forced – like she was trying too hard.  Still, she was fun to watch and filled the role emotionally and musically.

But (there’s that word again) the real problem is with Ansel Elgort as Tony.  I really don’t understand this casting decision.  Yes, this role is probably difficult to cast, but I can’t believe Spielberg couldn’t find anyone better.  Yes, he is tall and handsome and looks every bit the Pole that he is supposed to represent, but his performance was stiff and cold – even icy.  And don’t get me wrong, I loved him in Baby Driver where his icy coolness was exactly appropriate.  But as Tony, he is supposed to be confused, and torn by his roles as former convict, displaced ethnic, ex-leader, and intoxicated romantic.  But he’s none of that here and, despite his insistence that he sing his own songs, he can’t really sing either.  I’m definitely not alone in this feeling: Brian Tallerico (RogerEbert.com) wrote “These characters need to be almost jittery with the adrenaline of youth… Everyone gets that but Elgort.”

So, after all that, go back up eight paragraphs and re-read what Roger Ebert wrote about the first West Side Story movie.  Replace “Moreno’s” with “DeBose’s” and you pretty much have the same critique of Spielberg’s film.  In short, Spielberg delivered us a remake, but didn’t give us anything new.  Maybe we’ll get a new defining experience in the next version.

I hate to quote Tallerico’s review again, but it is also one of my favorite songs:

On Disney +, HBO Max and to Rent on Amazon Prime and other services