(4 Stars) No, Not Best Picture But a Satirical film with a not-so-funny message. 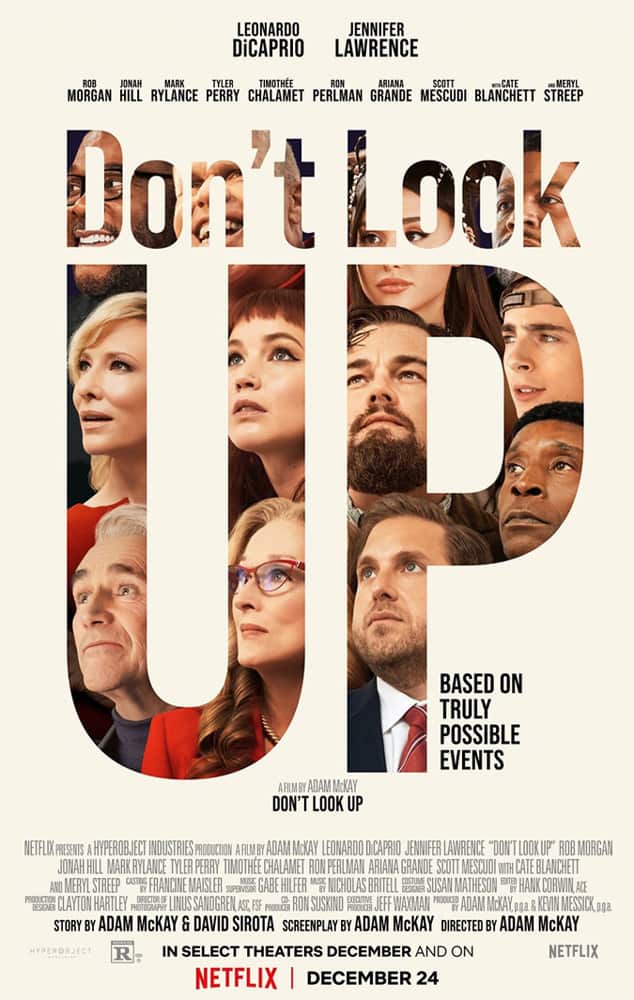 During this week’s Senate confirmation hearings for Ketanji Jackson Brown, Senator Ted Cruz asked the Supreme Court candidate what the definition of ‘woman’ was.  Josh Hawley and Lindsey Graham both did some amazing mental gymnastics to try and paint the first black woman nominee to the Supreme Court as some kind of pedophile.  The scenario was so surreal that I fully expected someone to order pizza from a certain Washington restaurant with Hilary Clinton’s name on the order form.

It is, frankly, very difficult, if not impossible, to fully understand contemporary America’s place in history right now.  Our political and cultural institutions are so overwhelmed with false “facts”, feelings interpreted as universal realities, and the incredibly short timeframe that technology imposes on our attention span – such that proper and correct interpretations of reality are, really, not only in short supply, but not even wanted.  We have devolved into machines of incredibly-short term gratification.  I’m even reading that sex is now becoming too complicated to pursue and not fast enough in happening.  How a society like this functions is, to this 70-year old addled brain, very uncertain.

So in this milieu comes this film, Don’t Look Up. Directed and with a screenplay by Adam McKay, we can expect a large amount of wit and humor. McKay got started in TV comedy with Second City Television and then Saturday Night Live.  Moving into films a decade or so ago, he was nominated for directing and won the screenplay Oscar for The Big Short, an attempt to describe the financial crisis of 2008. It had, as one of its more delightful moments Margot Robbie in a bubble bath explaining real estate derivative investments directly to the camera.  Three years later he wrote and directed Vice, the satirical look at the ominous power grabbing of Vice-President Dick Cheney.  I loved both of those films, especially in how they pulled the curtain away from the people in high-power positions, exposing their motivations as cheap and shallow, and much worse than the people they seek to control and demean.  (Does anyone else ever wonder how Donald Trump refers to his ‘base’ when none of them are around?)

McKay delivers again with Don’t Look Up, a Netflix production.  The film was, within eleven days of its release, Christmas Eve last year, the third most-viewed film on Netflix’s platform.  In just three months, the film has accrued nearly half a million ratings on IMDB and, with a 7.2, is in the solid middle of this year’s Oscar-nominated crop.  In addition to McKay’s nomination for Screenplay, it received three other Oscar nods, including one for Best Picture, placing it in the thick of the Oscar buzz.

Despite all the Oscar and popular accolades, the film places at the very bottom of this year’s Oscar-nominated films as measured by the critics Metascore.  With a 49, the critics are essentially saying that this movie is a waste of your time.  While I agree that it isn’t deserving a Best Picture Oscar, it is much better than a score of 49 suggests.  So, this is one of those situations where I might have an opportunity to understand why my impressions differ from the professional critics, or maybe to explain why they are wrong.

Nick Allen, writing for RogerEbert.com, wrote “McKay is mightily thwarted by the larger scope of Don’t Look Up, a hybrid of his comedic and dramatic instincts that only dreams of being insightful about social media, technology, global warming, celebrity, and in general, human existence.  A disastrous movie, Don’t Look Up shows McKay as the most out of touch he’s ever been with what is clever or how to get his audience to care.” Hmm.  I guess I might ask – Is it McKay who’s out of touch, or did Mr. Allen just not get it?

There’s insight here later in Allen’s review when he disparages the editing – which was also nominated for an Oscar.  He writes “… because the movie’s editing is complicit in the short attention spans that McKay nonetheless rages against, it tends to intercut different framed pictures of Streep’s President Orlean with various celebrities, or hop from one scene to another while characters are talking mid-sentence.”  So Mr. Allen is, essentially missing the all crucial fact that McKay structured this movie so that it mirrors, pretty much exactly, how people deal with the world in social media.  If you can’t see it in yourself, then just sit back and watch someone you know, for twenty minutes, interact with the world on Facebook, Twitter, or Instagram.  How many times do you/they actually finish a video?  How often do people actually read an article or post (or even this review) all the way to the end?  Whereas Allen is criticizing McKay, what McKay is doing in this movie is re-creating the structure of today’s lived experience.  Our world IS choppy, nothing segues to something else, it just terminates, usually before it is done making its point.  McKay, and editor Hank Corbin (who also worked with McKay on both Vice and The Big Short) knew exactly what they were doing when they edited this film.  It is Allen who doesn’t understand what’s happening.

Allen, while praising the list of high-powered cast members, argues that they were “then wasted on this movie’s limited sense of humor…” .  He especially moans that Cate Blanchett was particularly “wasted”.  Now, I haven’t spoken to Cate Blanchett, and I’m not likely to have that opportunity (although I would love to invite her to dinner).  But I am exceedingly doubtful that any of these cast members believe their talents were “wasted”.  In the first place this film was made during the pandemic when everything was working against a tightly cooperative group effort.  But more importantly, is that, aside from Randall (DiCaprio), and Kate (Jennifer Lawrence), ALL of the other actors are essentially cameo appearances – they aren’t meant to have meaningful roles.  In fact, that is essentially part of McKay’s message – these people in power, who might possibly, conceivably, have an infinitesimal chance of changing the doomed path our planet is on (politicians, media, celebrities) really don’t care to exercise that power – they aren’t present in the movie to any significant degree because they aren’t present in real life either!  They only appear in cameo and only then when they are totally prepared to manipulate the public sentiment in their favor.

I’m guessing that every single actor who played in this film was very happy with their performance and understood how it fit into the message being sent by the bigger film. DiCaprio, one of the world’s leading activists in the battle to acknowledge and deal with climate change, succumbs early on to the seduction of Cate Blanchett’s amoral Fox News anchor.  But he does so as a way of showing how powerful the opposing forces have become and how easy it is to become seduced by their easy rhetoric. Whether it’s Cate Blanchett, Meryl Streep, Jonah Hill, Mark Rylance,  or Timothee Chalamet (who between them all have more than 32 Oscar nominations and six Oscar wins), all of them are playing caricatures of politicians, TV news personalities, or celebrities reminding us that, while Don’t Look Up might be fiction, the basic plot line is very real, and now.

If Allen’s point is that none of the actors work was Oscar worthy, then, sure, I’ll go with that.  Leonardo DiCaprio and Jennifer Lawrence both have outstanding moments.  But this movie is not intended to be about characters – its about situations and the world as we exist right now – a world, really, where individuals don’t matter a whole lot, despite what we might say.

I have to add a brief note about Mark Rylance (as Peter Isherwell). Isherwell is supposed to be an exaggerated combination of Musk, Jobs and Zuckerberg.  He is a technology guru who, as head of BASH, is pretty much on the path of controlling all of human destiny with BASH providing the hardware and software.  In the end, he has an incredible amount of power over the fate of all of humanity.  However, as things start to go not-so-well, his child-like but all-powerful persona suddenly has to “go to the bathroom”.  He is, as we really should expect of our Capitalist corporate leaders, really looking out only for himself.  I have loved Rylance ever since Bridge of Spies and I wonder if, in some way, his repeated question in that movie is really more appropriate here:  “Would it Help?”.

Near the end of Allen’s review he writes that “Don’t Look Up thinks it’s pushing many savvy political buttons when it’s only pointing out the obvious and the easy, over and over.”  There might be some truth to that – those political buttons have been pushed over and over and in so many ways over the last few years with no obvious effect.  But what this film does is reduce those obvious political buttons to satirical asides, and frames them within the short duration span of contemporary technology.  And yes, McKay repeats a lot of the obvious “over and over”.  That is what social media “liking” does – you get to see the same thing over and over.  So, once again, Allen misses the point.

I have to include a short paragraph about the music.  The soundtrack includes 19 songs, either originals from recent R&B, rap, or other contemporary music, most of which I am unfamiliar with.  Still I loved the music.  And, especially, the original score from Nicholas Britell who was nominated for this soundtrack and earlier for his work on Moonlight and If Beale Street Could Talk, all three of which were terrific.  I have listened intently to two other nominated soundtracks this year and I can say that this one is my favorite.  It is a wonderful melding of contemporary and electronic sounds all while playing off the essential contrasts of the film.  It probably won’t win the Oscars Sunday, but it is excellent.

The last sentence in Allen’s review is “McKay has filled this parable with hot air, wanting us to marvel at and then choke on its mediocre jokes.”  Joan and I DID laugh, frequently, at the humor in Don’t Look Up.  But only when we weren’t crying.  The sadness in this story is profound, because, as many of us see it, we as a people have become completely unwilling to even acknowledge the severity of life-altering changes that are coming to us from climate change.  Yes, we once did have the capacity to absorb and adapt to some of those changes.  But our reluctance to acknowledge the seriousness of what’s coming, coupled with our engagement in totally unproductive uses of human energy (like trying to find slave children in the basements of pizza parlors or asking a judge to define ‘woman’) means that we, really have completely and fully embraced the idea – we are still in the mode of just “Don’t Look Up”.

(4 * It isn’t the greatest of films, but its a lot better than the critics think.  And the real question is “Would it Help?”) 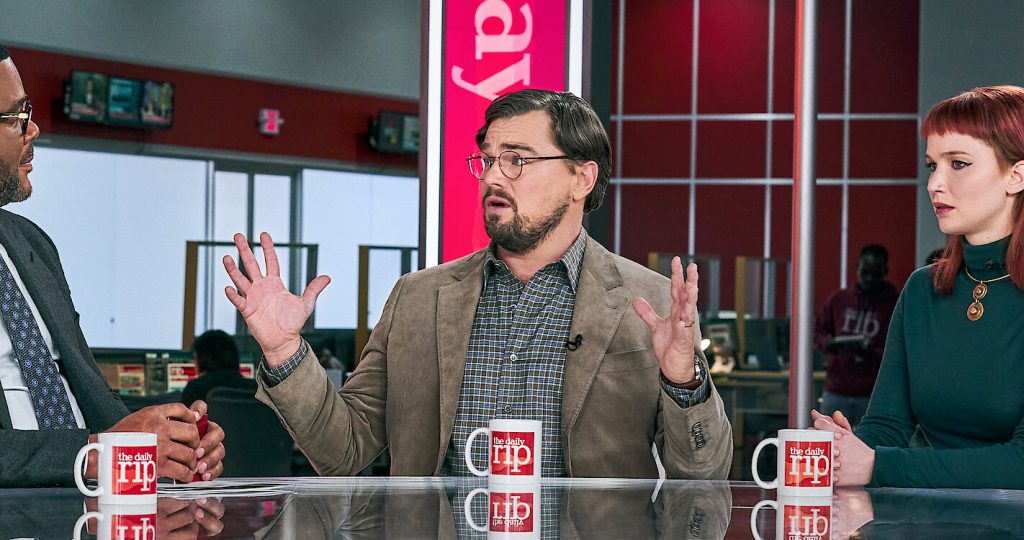