(4 Stars) A fascinating horror/sci-fi flick where sound is the major ingredient. 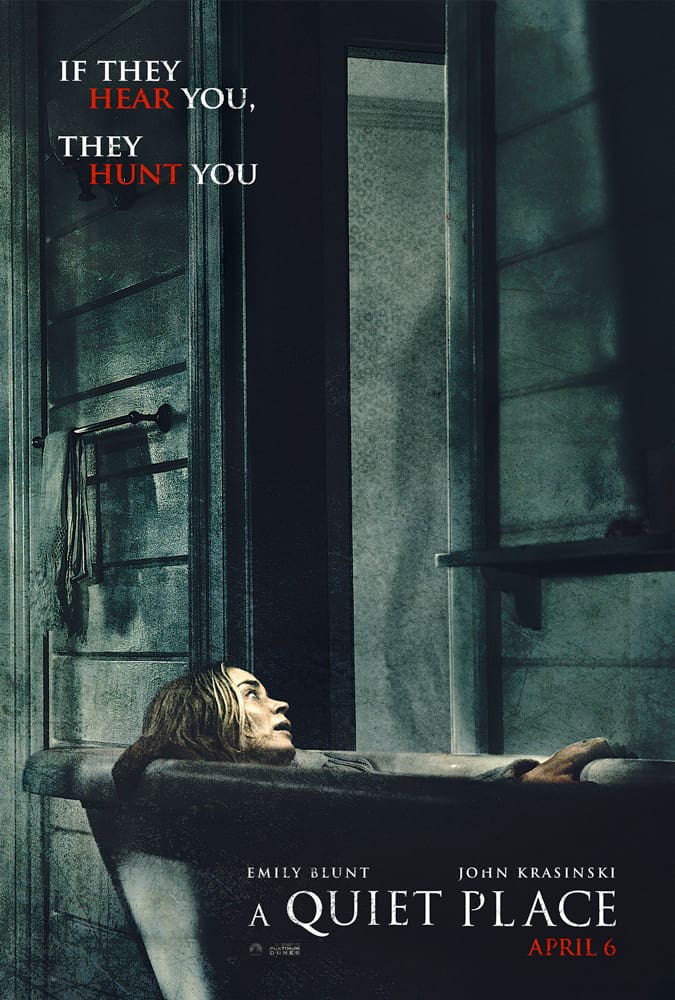 There are just 25 lines of spoken dialog in this movie and you don’t hear the first word until the movie is nearly half over! The only song on the soundtrack is Harvest Moon by Neil Young and, as I recall, it is only played during the final credits. And the music, by composer Marco Beltrami, is sparse and minimalist consisting mostly of simple chords from violins and basses. (In addition to composing the music for several other science fiction movies – I Robot, World War Z, Knowing, and Blade II – he also received Original Score Oscar nomination for The Hurt Locker and The 3:10 to Yuma movies.)

And yet despite so little obvious sound input this movie was nominated for Sound Editing, and, in my humble opinion, it should have won the Oscar. Horror movies almost never make it onto the Oscar lists and Science Fiction is usually relegated to the Visual Effects category. A Quiet Place falls squarely into both of those genres but demonstrates so effectively the power of good sound, that I think everyone interested in the craft of making movies should see this film. It is so ground-breaking in its exploration of sound that it elevates in the viewer’s mind the power of the aural experience that is usually reserved for visuals.

Yes, this is a sci-fi horror flick with its most obvious influence being the Ridley Scott Alien movies. So if you can’t stand the tension of a good horror flick, with disgusting and vicious monsters, multiple jump-scares, and plenty of misdirection – or if you have a serious history of heart problems – then you might want to avoid this movie. But if experiencing emotions is one of the main reasons you see movies then this needs to be in your queue – just be prepared for the evening.

This is a relatively low-budget movie, filmed entirely in a farm setting and small town in upstate New York. The cinematography is subdued and intimate, conveying a setting where visuals are everything for the family because they can’t talk to each other.

The reality of A Quiet Place is established severely in the first ten minutes of the movie, We learn, without a word being spoken, just about everything we need to know about this family’s situation – as we watch the tragic events of Day 79 unfold. What happened 79 days ago isn’t yet clear. Indeed, pay acute attention to the panorama of news clippings and notes in Lee Abbott’s study/laboratory – there are lot of clues there about what happened and the desperate situation humanity has fallen into. The immensity of the. Problem becomes clearer as the movie unfolds.

(There is one critical piece of information – that the alien armor resists bullets that isn’t made clear. I don’t know if that is a failure in editing, or in script writing – or maybe that I missed the clue. But without that piece of information, it is difficult to understand why the family doesn’t just shoot them! Of course, there is the minor little problem that a gunshot would definitely attract more of them since, although they are completely blind, their hearing is so enhanced that even the smallest sound is audible to them at great distances.) 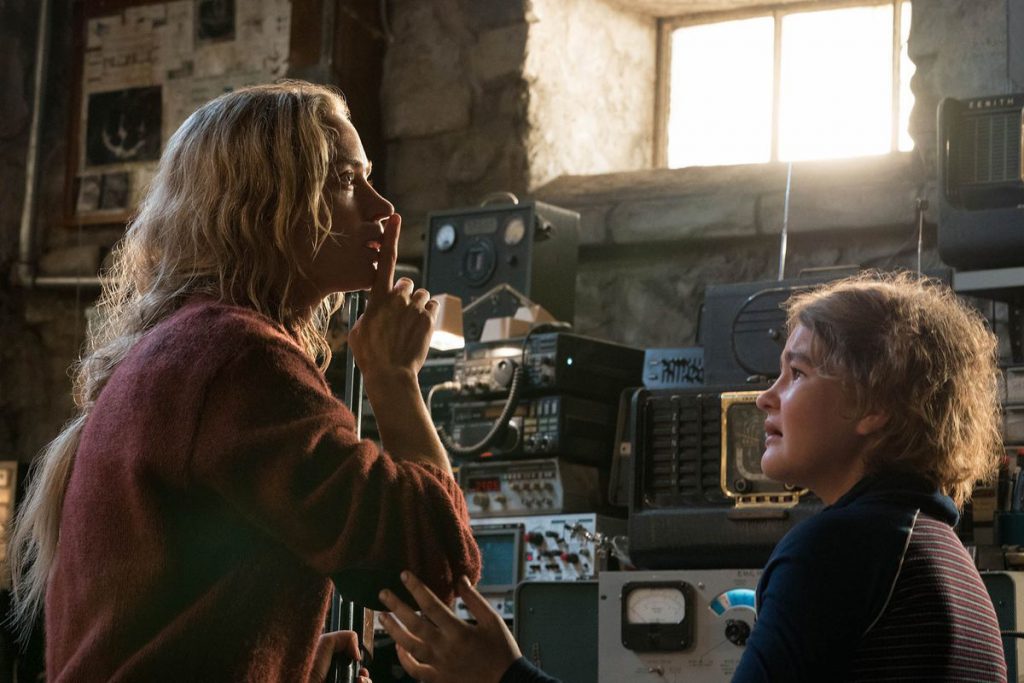 So, this isn’t a perfect movie. John Krasinski is the director and a co-writer here. He is mostly known for his acting and writing work in television comedies, especially The Office. I think, like in last year’s Get Out, the comic sensibility of timing translates well into a horror fil. But still, Krasinski doesn’t have a long resume of experience in directing and writing and the movie doesn’t shine in those categories.

Krasinski also plays Lee Abbott, the father, and his real-life wife, Emily Blunt, plays Evelyn Abbott. They have three children, at the start of the movie, and the oldest one, a daughter, was born deaf. (She is played by an up an coming young person is also actually deaf!). This deafness actually plays a very important role in the movie in multiple ways, but one of them is that, because of her, they all know sign language, which is how they communicate without alerting their predators. Aside from an elderly couple who are on screen for a very small minute, this family is the entire cast of the movie – if you don’t count the monsters.

After Day 79, which is troubling enough, the screen goes black and pauses. We then catch up to the family over a year later. What we know is that they have managed to stay alive for that long, obviously by remaining perfectly silent. What we also see is that Evelyn is pregnant and she is due in just a few weeks. if you think about that for just a little bit, the sense of terror will begin to build. After having fathered two babies I can attest to the raw fact that babies and Silence do not go well together. So exactly how will this family deal with that? The tension increases and so does fear of the future.

Sound Editing is the cinematic art of creating sounds to match the action in the movie. In A Quiet Place, where speech is fatal, an amazing amount of information is encoded into the silence and the sounds that occupy the movie’s soundscape. Creating sounds to fill in the gaps, where any sound has profound significance, becomes the job of the sound editors, Ethan Van der Ryn and Eric Aadahl, both nominated for the Oscar in this category. They have been nominated before for their work on two Transformers movies, two of the Lord of the Rings films, Argo, and King Kong. In A Quiet Place, their work reaches a superb level and, I believe, they should have won the Oscar.

This isn’t a perfect movie. Like many science fiction films, it has a few logical holes and the viewer is required to suspend disbelief. (And for these reasons I can only give it 4 stars). But this is a powerful movie that displays, with stunning success, a corner of movie-making that is often overlooked. Oh, and I should mention there is a sequel coming out next year!

2 thoughts on “A Quiet Place”