(4 Stars) Ethan Hawke in a well-crafted mystery/thriller full of plot twists and turns. If you pay attention, you will be rewarded. 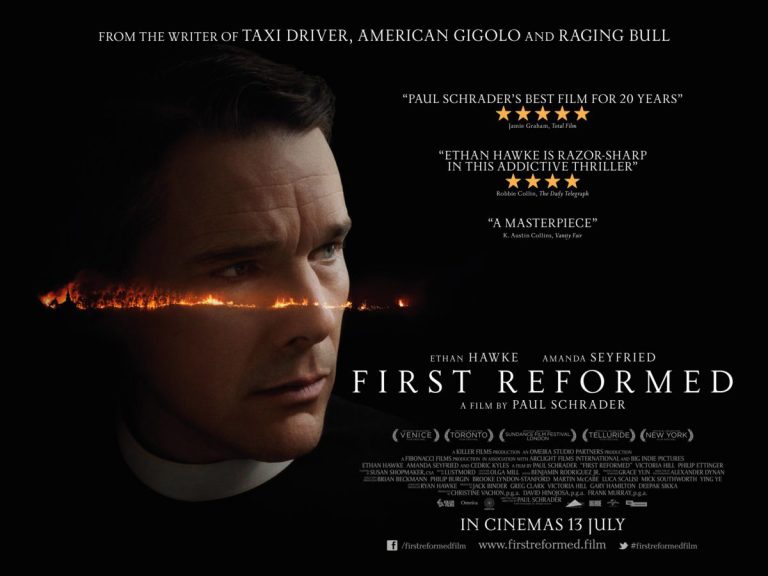 Paul Schrader has never been nominated for an Oscar before this movie, although several of his films have been. He wrote the scripts for Affliction (2 Oscar nominations), Taxi Driver (4), and Raging Bull (7). In addition to writing First Reformed (and receiving an Oscar nomination for the script) he also directed this movie which is one of the more interesting films in this year’s Oscar-nominated movies. Although the film sports admirable work in music, cinematography, and editing, it is the script that shines as well as the performance of Ethan Hawks as Reverent Toller, the central character.

The title of the movie comes from religious history. The ‘first reformation’ is usually viewed as the rebellion to the Catholic orthodoxy of Martin Luther and Lutheranism. However, many believed that Luther didn’t go far enough and so there was a second reformation known as Calvinism. Schrader was raised in a strict Calvinistic environment and wasn’t even allowed to view his first movie until he was well into his teens. This movie reflects his upbringing coupled with the acute stresses that climate change and environmental degradation place on that religious faith. As such, this is a difficult movie with complex and shifting conflicts that may, or may not, get resolved as the movie progresses.

A high-school best-friend recently sent me an article about movie plot-lines that seems to identify a pattern that can be applied to nearly all works of fiction, including most movies and books. The article got me thinking more about the potential value in trying to classify movies into categories by abstracting the plot lines up a level to try to capture what the story is telling at an abstract level. In doing more research on that topic, I found a classic study that purports to identify just seven major conflicts in all (or at least most) stories that are told in books or movies – some of these notions go back to Aristotle, so this isn’t exactly new stuff. All stories involve telling the progression of a person’s conflict with one of seven different potential antagonists (person, self, nature, environment/society, machine/technology, the supernatural, or God/religion).

Although I’m simplifying the article my friend sent me, as well as adding a slightly different twist to the interpretation, what might distinguish a good movie from a bad movie is that it steers you down one particular path of conflict, but then at some point (about 60% through the movie) there is a ‘reversal’ or surprising event of some kind that reveals, either to the protagonist or to the reader, or both, that the conflict really involves something else entirely. The story arc changes, dramatically, and then resolves in a satisfying fashion.

In First Reformed, all of this structure is definitely in play. We are painted a picture of Reverend Toller’s past and the movie adequately fills in the details. We see a story of a man who is fighting a past that is negatively colored by the death of a son (in Iraq) and the dissolution of that marriage (although it sounds like it, that is not a spoiler.). Toller is having more than the usual problems dealing with that. So in a very real sense he is having significant conflicts with the society that took his family.

But that conflict doesn’t stay central very long. For one thing, we learn that he is also having some significant physical problems, part of which are beyond his control. But his illnesses are complicated by behavior problems that, theoretically he could control. Thus he is also in conflict with himself!

If that isn’t enough, then don’t forget that he is a reverend in a First Reformed church. So many of these problems become central in an emerging conflict with his religious upbringing and, of course, with God. (There is a terrific dialog early in the movie about the relationship between despair and hope which, I think, is probably one of the reasons the script received the nomination.). Toller (Schrader), is clearly trying to reconcile his despair with his faith in God’s plan. 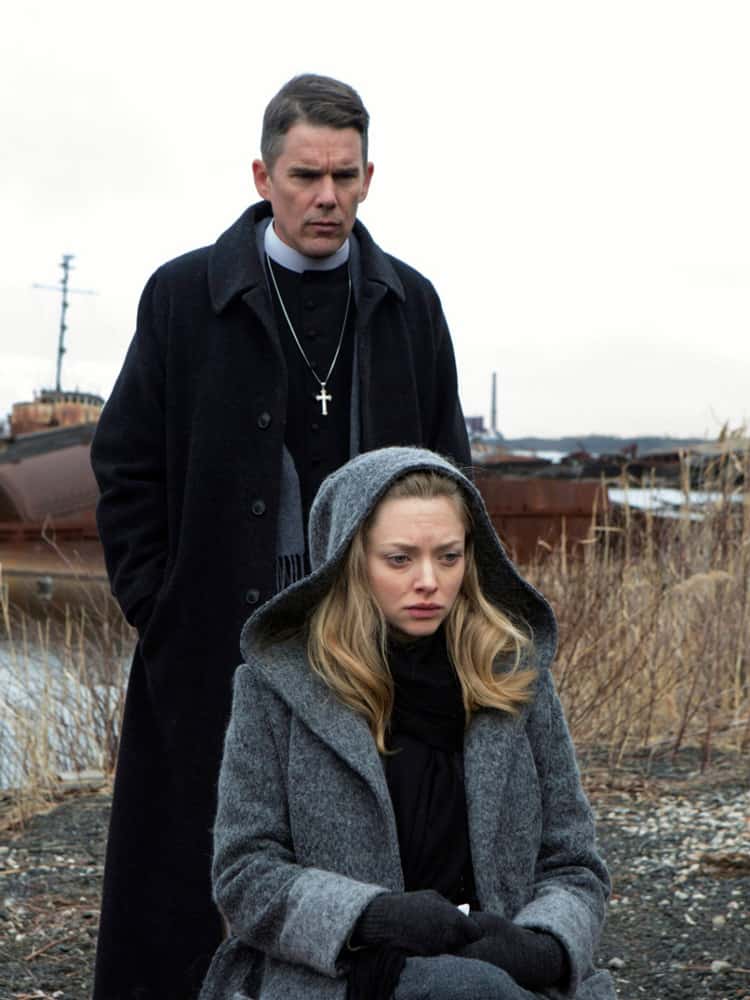 Things change again when the reverend is confronted with a married couple with some serious problems of their own. Mary (played gorgeously by Amanda Seyfried) is pregnant, but her husband, Michael, deep in the implications of climate change and environmental degradation, doesn’t believe he can possibly be a part of bringing someone into this world who will likely see such catastrophic results in their lifetime. In a line repeated a couple of times in the movie, Michael asks Toller, “Can God forgive us? For what we’ve done to this world?” The conversation with this couple, and the events the next day, bring on yet another reversal for Toller, bringing the conflict back to society, for what it has done, and to God for what He apparently hasn’t.
Without giving critical scenes away, let me just add that Toller is a lonely man and there is another scene with Mary that, while it involves absolutely no sexual activity, has a totally profound and ‘otherworldly’ effect on the reverend, pushing his ‘conflict reversal’ in one more important direction. The ‘resolution’ at the end, if you can call it that, raises more questions than it answers, but is, in at least one sense an answer of sorts – there is at least a moment of connection and hope amid all the despair.

In the final analysis, trying to apply the conflict reversal and resolution model to this movie was fitfully difficult. If anything, there were so many conflicts engaged at the same time that sorting them all out proved challenging, and resolution maybe impossible.

But that does not make this a bad movie. Brian Tallerico (RogerEbert.com) writes “The writer…is having a crisis of faith, examining personal issues of religion in a way that he hasn’t done in a very long time, and doing so in a style that feels very European.” Godfrey Cheshire (also of RogerEbert.com) wrote that First Reformed “…is a stunning, enrapturing film, a crowning work by one of American cinema’s most essential artists. Yet in the moment I deliver that unstinting endorsement, I feel compelled to add that this is a very special film for a certain inevitably rather limited audience.”

This movie is classified as a drama (of course) but also as a Mystery and a Thriller. It is all of that, but in a unique way. The New York Time’s A.O. Scott wrote, “the source of the terror, though, is not a supernatural presence but a metaphysical absence.” This movie doesn’t scare you by physical appearances or emotional jolts; rather it is what it does to your mind.

The more I think about this movie, the more I like it. But I also believe that maybe Schrader bit off a little more than he could chew. For that I only give it 4.0 stars.