(3 Stars) Willem DaFoe plays Van Gogh in a movie built much like an expressionistic painting. 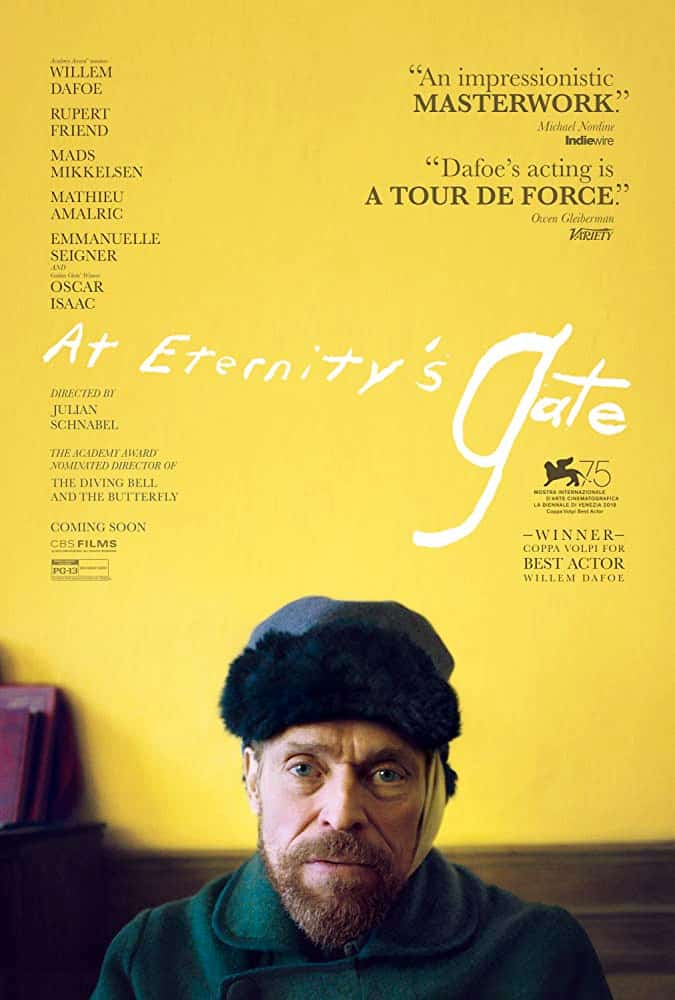 This movie, if you don’t already know, is about Vincent Van Gogh. So before you see this movie, or even before you read this review, Google Van Gogh and spend a few minutes looking at some of his work – it will help you appreciate this movie as well as what I say about it. As you look at his work, notice how thick the paint is, how much has been applied to the canvas. As Paul Gaugin says to Van Gogh (at least in this movie) “Your surface looks like it’s made out of clay. It’s more like sculpture than painting.” Van Gogh’s work is notable for its layers of paint, applied in broad, thick strokes in a concentrated ‘act of painting’.

I think you could also raise the same points about this movie – it is a confection of very thickly applied movie-making brush strokes. The question, for myself and for anyone viewing this film, is whether you can appreciate this thick, almost over-powering approach to film-making. It seems to me that the director and co-writer, Julian Schnabel, has actually attempted to make a movie about Van Gogh that attempts to replicate, in the film world, the approach Van Gogh used in the painting world! And, the corollary to that, is that whether you like that approach in this movie, depends greatly on whether you like painting like that – whether you really appreciate that style of art!

In some sense, this is not surprising. If you don’t recognize the name Julian Schnabel, who is largely responsible for this movie, then you might not appreciate everything going on here. Schnabel was a new-expressionist artist before he got into films. He wasn’t nominated for this movie, but he did receive a directing nomination for The Diving Bell and the Butterfly in 2008. That, too, was another exercise in film-making creativity. One of his co-writers was Jean-Claude Carriere who was nominated in 1989 for The Unbearable Lighteness of Being. (He also received two earlier writing nominations in the 1970s). The resulting script from these two (and also Schabel’s life-partner and editing partner Louise Kugelberg) is an interesting exercise that, in the context of exploring the final three years in van Gogh’s life, also attempts to capture the essence of what being an artist is all about. As Brian Tallerico (RogerEbert.com) writes “(Schnabel) delivers a film more interested in philosophy and process than product….(it) can be a challenging experience for the viewer.” 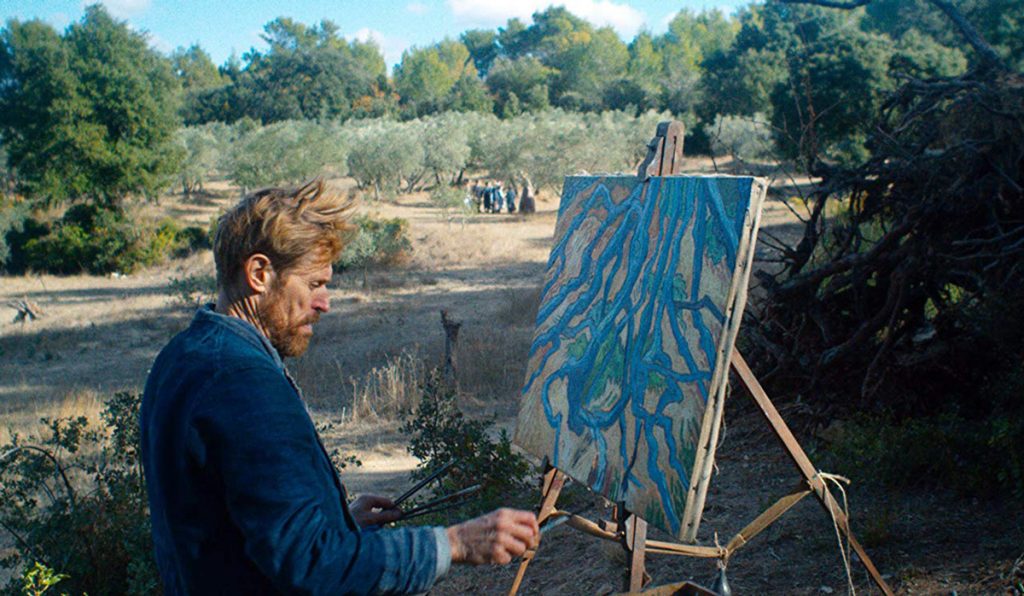 And it is challenging in many different respects. The music is minimalistic, focusing, frequently, on single repetitive notes from a violin or piano. The intensity and volume can range from supportive to oppressive. The cinematography (from Benoit Delhomme, who gave us The Theory of Everything and The Scent of a Woman) is, much like an abstract painting, applied with thick strokes -a hand-held camera delivers the sense of impermanence; yellow filters project van Gogh’s obsession with sunlight; a singular black and white still shot that then fades back into color; a strangely twisted lens that, initially, made me think that my TV screen had broken until I realized that he was trying to portray how the world might appear to a mad – man! In the second half of the movie, Schnabel starts to layer images on top of each other and then to repeat lines of dialogue, all in the service of portraying insanity!

How successful all this movie-making magic is will depend entirely on the viewer. I found myself going back and forth between being irritated at the attempted manipulation and being mesmerized by the intriguing effect. Your own reaction will depend a lot on how much you appreciate expressionistic art!

What cannot be doubted, I dare say, is how good Willem Dafoe is as the title character. Dafoe has, primarily, been a supporting actor receiving Oscar nominations in Platoon (1987), and Shadow of the Vampire (2000). He also did a great job as the villain in Spider Man (2002) and played a significant, but supporting role in Grand Budapest Hotel (2014). His most recent role was in a movie that I really couldn’t bring myself to like, The Florida Project (2017). As Van Gogh, though, Dafoe delivers a compelling performance. Although Dafoe was significantly older than Van Gogh when he died, the lines in his face, and the tranquil but desperate look in his eyes, all portray a very effective man trying to keep his grasp on reality through his art. Dafoe deserves this nomination and possibly the Oscar.

As Manohla Dhargis (New York Times) writes “the movie is a freely subjective portrait of Van Gogh by another artist trying to see, paint and feel as he did. … Schnabel has made not just an exquisite film but an argument for art.” Whether you agree with that is a big question.

I couldn’t make up my mind about this movie – oscillating between two and four stars. So, I’m going to have to come down in the middle – 3 stars for At Eternity’s Gate.