(5 Stars) One of my favorite movies of the year, a black man joins the KKK. Although it sounds like a comedy, this is a Spike Lee movie full of important messages. 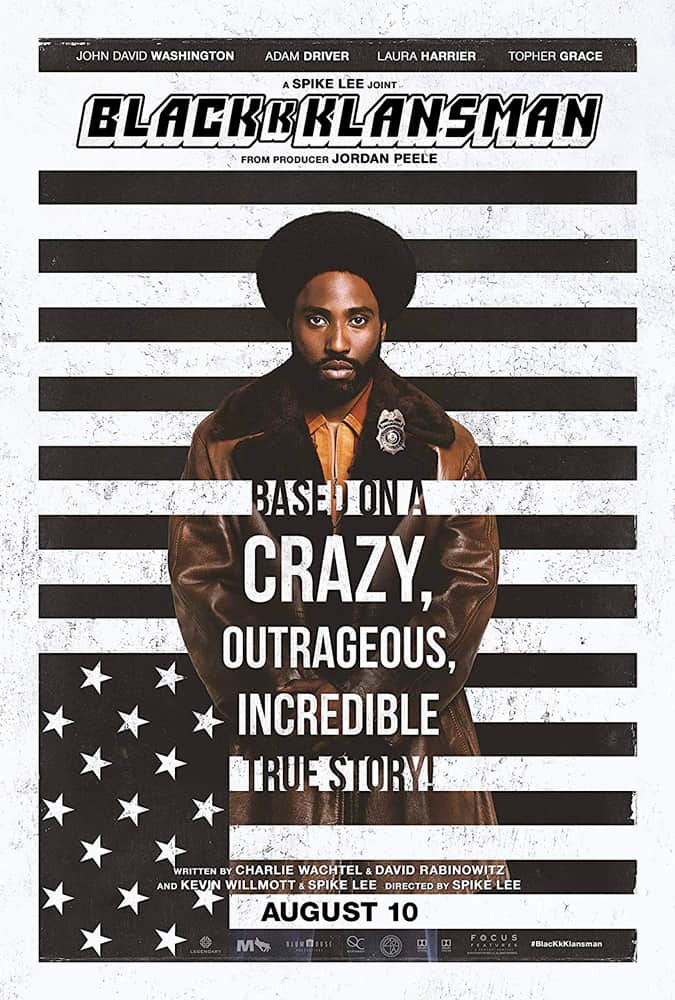 The premise of this movie is plainly absurd – the idea that a black person could join and even function as a member of the Ku Klux Klan (The Organization) is so preposterous that you have to imagine the result as a comedy, or even a farce. And there are, indeed, comic elements scattered throughout this movie – necessary moments of laughter. But they are needed because there is really nothing funny about this movie’s message – that racism in America, not only has a long history, but is alive and even thriving in contemporary America.

From the creative imagination of Spike Lee, who has brought us such magnificent movies as Do the Right Thing, Malcolm X, and She’s Gotta Have it, this movie may well represent the pinnacle of his career. BlacKkKlansman, which was rated in the middle of this year’s Oscar nominees by both critics and audiences, surprised me in just how effective it was, and I suspect it has a very good shot at winning this year’s Best Picture Oscar. Using several of Lee’s signature traits (like double-dolly shots, grainy, high-contrast imagery, strong women characters, and an extended discussion of ‘wokeness’), Lee uses the comic elements of the situation to amplify the seriousness of his theme.

The writers (except for Lee, new to the Oscar-nominated world), adapted their tight screenplay on a book – a true, if incredible, story – written by Ron Stallworth, a young cop, new to the Colorado Springs police department in 1979. Shortly after joining, he becomes a detective and then, without much forethought, begins talking to the local chapter of the KKK over the phone. Soon, he is talking to the Grand Wizard himself, David Duke, who wants to come out to Ron’s initiation ceremony. Obviously, he can’t meet any of the KKK members as himself, and so ropes his partner – a non-practicing Jew, Flip Zimmerman – to portray Ron in face-to-face meetings. So the two of them, acting as the same person, successfully infiltrate The Organization. (The two-person partnership between a black and a Jew brings on even more comedic elements.)

John David Washington, Denzel’s son, plays Ron in the movie and a terrific Adam Driver received an Oscar nomination for Supporting Actor for his role as Zimmerman – Driver’s first Oscar nomination (He is best known as Kylo Ren, Darth Vader’s successor in the later Star Wars movies.) But he was surprisingly nuanced in this role and, although he is a little under-exposed to win an Oscar this year, I wouldn’t be surprised to see him snatch the award in the future. Driver brings credibility to Zimmerman’s growth in his own faith and identity and as his relationship with Stallworth matures.

Terence Blanchard, a jazz trumpet player who worked with Winton Marsalis and has worked with Lee on previous films, was nominated for his Original Score. His jazzy themes seem perfectly matched to the on-screen characters and help create the tension between the absurdity of the situation and the fraught seriousness of what is building on the screen.

Without giving away too much of the plot, let us say that The Organization bumbles towards a deadly conclusion and it is at the climax that Lee’s filmmaking skills break through in dramatic fashion. Barry Alexander Brown received a nomination for film editing here and, in these climatic scenes, I think he shows why this particular craft is at the core of movie-making magic. Two events are occurring simultaneously – the KKK chapter is having their initiation luncheon, followed by a screening of Griffith’s Birth of a Nation.

Meanwhile, the Colorado Springs black community is having a meeting where Jessie Turner (played perfectly by Harry Belafonte) recounts the harrowing and horrific tale of the torture and murder of a black man that he witnessed. The tension builds as the scenes cross-cut back and forth, slowly at first, and then with increasing drama. The net effect is to serve as witness to the realities and the horror of racism that isn’t just in the past, but is so clearly with us today. (Although I’m not sure it was entirely needed, Lee further roots the movie in today’s politics, by running video of recent events, and tying the movie directly to our current administration.)

I have already given Roma five stars and believe that movie will win several Oscars. But this one too is also a serious contender. It is a tightly written, directed, and edited movie with engaging craftsmanship. It isn’t as intimate as Roma, but it still tells an important and contemporary story. I normally only give out my highest rating to just a single movie each year, but I need to break that rule and give BlacKkKlansman five stars.