(4.5 Stars) Rami Malek delivers a terrific performance as Freddie Mercury in an excellent film I liked better than the professional critics. 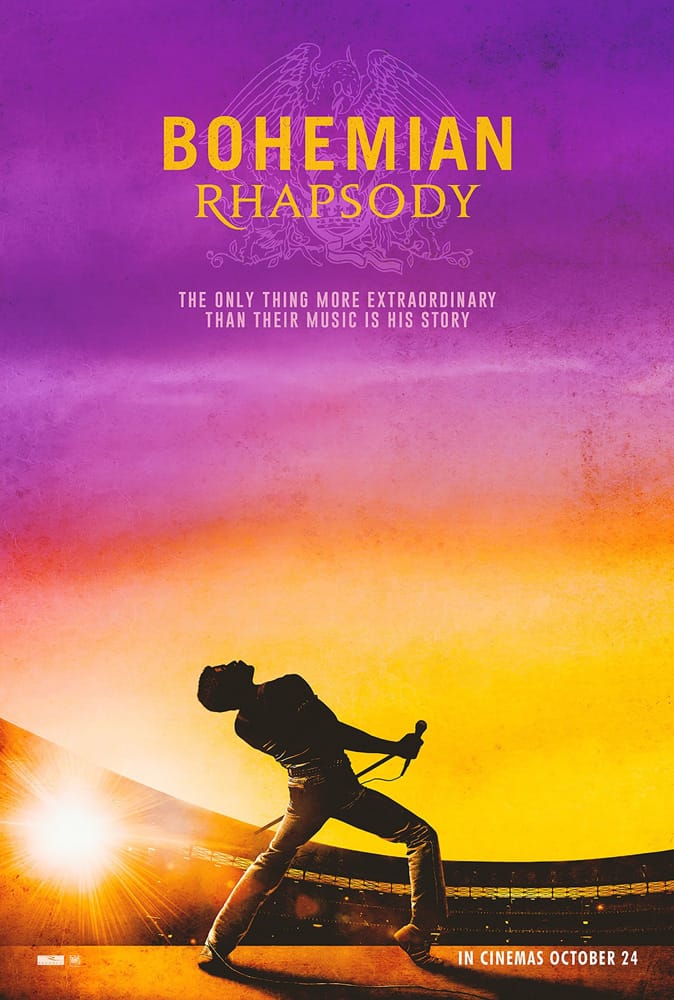 ‘And the hits keep coming.’ What a terrific crop of movies are in this year’s race for Best Picture. Bohemian Rhapsody, the story of Freddie Mercury, Queen’s frontman, is the most recent of the four I have seen and, once again, I was amazed at how good the movie was.

Admittedly, I know nothing about Queen. Yes, I’m aware that it was a very popular band, achieving almost a mythical and cult-like following by many people who grew up musically in the early 80s. But at that time, I was busy trying to get a career going in New York City, with little time, and even less money, left over to spend on music. And by the time the Live Aid concert, which is the climax of this movie – and apparently of Queen’s musical reputation – I was getting married for the first time and trying to figure out what that all meant.

Which isn’t to say that I was totally oblivious to the music. Queen produced a number of important songs in its time, including “We Will Rock You”, “We Are the Champions”, and “Fat Bottomed Girls”, all of which most of us easily recognize. The song named in the title of this movie is, despite being somewhat difficult to decipher, considered a masterpiece. I have also read that the 1985 Queen performance at Live Aid is considered some of the best 20-minutes in music concert history.

That song, and that particular performance, are the climactic scenes in this movie, which tells the tale of Queen and, more specifically, its lead vocalist, Freddie Mercury, from the time Freddie joins the band up through the Live Aid concert. All the band members are well acted, and were mentored by at least two of the real band members during filming. But the focus of the movie is Freddie Mercury, played beautifully by Rami Malek who received a Leading Actor nomination for this role. Malek is not well known to me, as this is his first Oscar nomination, but he is apparently best known for his leading role in Mr. Robot, a popular TV series. While playing Freddie Mercury cannot possibly be an easy role, Malek, fitted with oversize teeth, manages the complicated emotions of a young man trying to make his parents proud of him, while confronting difficult choices surrounding his sexual identity. Although he memorialized Mary Austin as ‘The Love of My Life’, writing a song about her, and returning to her frequently throughout his life, he is also attracted to men. Once he decides ‘he likes himself’, he befriends a male who does stay with him for the rest of his too-brief life. As Malek’s first nomination, he may require more seasoning before being awarded with an Oscar, but he nailed this performance with such intensity that I have to believe we will be hearing from him again. 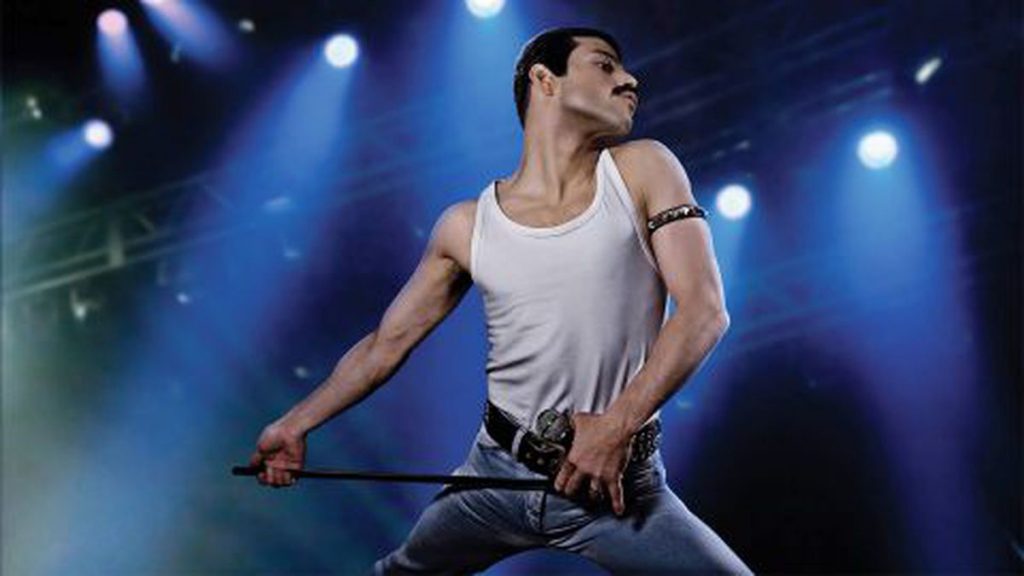 Bohemian Rhapsody supports my theory that the best movies are those with a balance of ‘below-the-line’ and ‘above-the-line’ Oscar nominations. This movie received Best Picture and Leading Actor nominations above the line, but it also received three ‘below-the-line’ nominations. One of them, for Film Editing, illustrates the skill involved in putting together a tightly constructed film. John Ottman edited this film and this is his first Oscar nomination. He is best known as a music composer for movies like Valkyrie, Usual Suspects, and Superman Returns, not as a Film Editor. However, in this case, I think his composing background gives him keen insight into the music scenes – he knows how important the process of music development is and is able to cut the scenes in a way that enables the audience to seamlessly appreciate how a song, or a concert, comes together. The only other 2019 Film Editing nominee I’ve seen, BlacKkKlansman, is tough competition – I have no idea how the academy will decided between these two.

Finally, of course, there is the music. Largely because of the importance of the musical message, it was critical that the sound technologies were emphasized in this movie and that is reflected in nominations for both Sound Editing and Sound Mixing. The sound of Queen is emphasized in ways that defy description – especially if you watch this movie with your sound system turned up loud. It is hard to tell you aren’t in a packed stadium watching a live Queen concert. In a normal year, the sound editing and mixing awards go to the most popular ‘war’ movie. However, for unknown reasons, we don’t have any war movies this year, so the awards will likely go to movies with powerful music themes. Besides Bohemian Rhapsody, that leaves A Star is Born as a competitor in the Mixing category, and Roma in Sound Editing. Because of how good the sound values are in this movie, I think it has a good chance in either category.

This is one of those interesting movies where the viewing public rated this movie significantly higher than the professional critics. In fact, the day the nominations were announced, this movie had an IMDB Metascore of 49, which was the lowest critical rating of all 37 Oscar nominated movies. At the same time, audiences gave it a generous 8.3 (out of ten) average rating. The negative assessment seems to come from several general criticisms. One is that several critics seemed to think that Mercury’s homosexuality was unfairly treated, that, in fact, it was viewed negatively and that the homosexual sources of his creativity were understated. Another problem is that the entire structure of the movie was viewed as trite and somewhat of a formula – that, it seems, all movies about artists seem to tell the same general story. Finally, some sources noted the films controversial problems with the director, Bryan Singer, who when he showed up at all towards the end of production, was usually quite late. (That problem makes it into the movie in several references.).

I’m not certain what to make of the homosexual criticism. While there are times when Paul, his first gay partner, certainly provides a negative influence in Freddie’s life, and does not paint the gay lifestyle in a constructive light, his ending partner, Jim Hutton seems to be an extremely important part of his final years and offers nothing but broad support and deep love. As with the general arc of the story, I guess I don’t know enough about Mercury’s life to judge the movie’s accuracy. Clearly, though, the film illustrates the importance of sex and of love in inspiring creative flow, and in that, I think, is the great strength of this movie. This is a case where I think the critics need to go back and watch the movie again, to see if maybe they misjudged some things.

I have now seen four out of the eight movies nominated for this year’s Best Picture Oscar. I am astounded by how good all four of these films have been, and view the race as among the most competitive I can remember. All four of these films are at least four-star movies. Although I reserve the right to change my mind, at the moment, I still think Roma is the best, and gave it five stars. But Black Panther was very entertaining and worth four stars. The last two movies, BlacKkKlansman and Bohemian Rhapsody, while very different in theme and effect, fall right in the middle at 4.5 stars. This is a great year for good movies – see all four of them!