(1 Star). You’ve been warned - watch only if you really like this kind of thing. 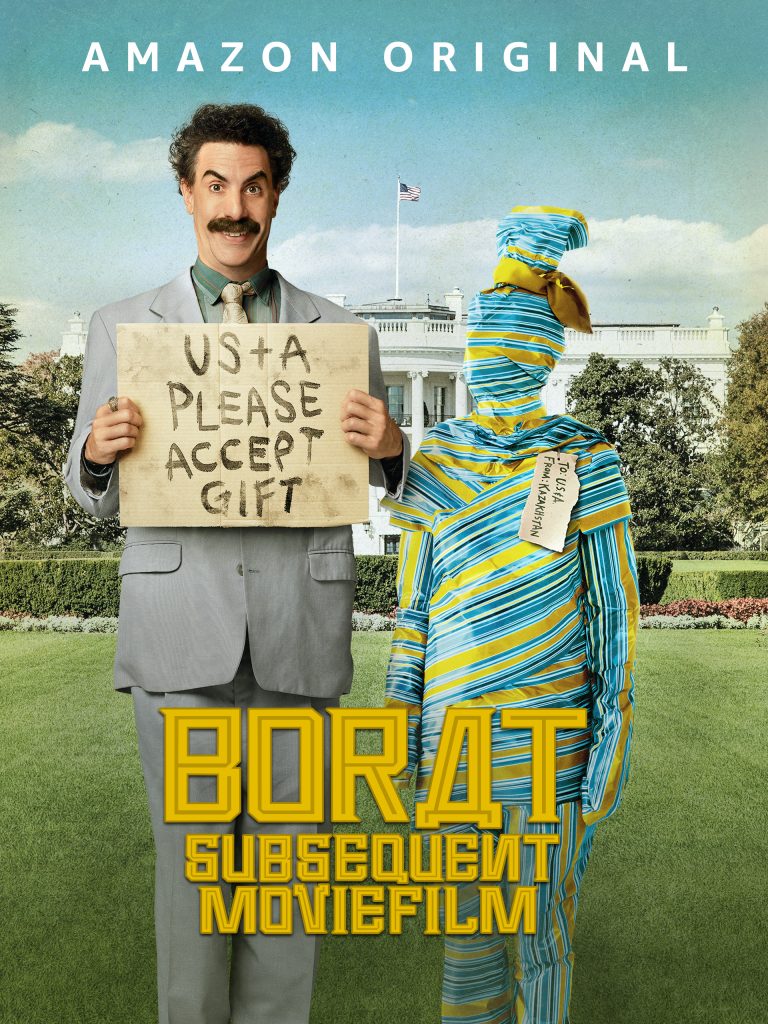 Upfront Disclosure: I really don’t like this kind of ‘comedy’.  Frankly, I find little to laugh about when I watch many so-called comedies these days because all I really see or hear is a bunch of sophomoric jokes, crass sight-gags, and comments that, generally, demean the things that I think are basic human dignities.  I don’t know if that makes me a snob, someone who has intentionally defined arbitrary boundaries on experience, or some kind of pseudo-intellectual.  Whatever the reason, to me, participating in offensive displays of language and situations is not something I find amusing.

And so, the movies of Sacha Baron Cohen are not typical fare for me – I avoid them like the plague (these days we say Covid).  I haven’t seen his earlier films and, as I noted in my earlier review, I was pleasantly surprised at his dramatic performance in Trial of the Chicago 7 because I didn’t really think he had it in him to take on a serious role.

Given all that, it was with some fear and loathing that I sat down to watch Borat Subsequent Moviefilm.  The only reason I watched it was because it actually received two Oscar nominations – and two major ones at that.  After a little over an hour and a half of being grossed out and wondering exactly how and why the Academy would choose to recognize such a thing, I also wondered how I was going to write anything useful about this film.  I suspect the world is probably divided into two main camps in regard to Borat.  There is a small minority of people who love this kind of thing and have probably already seen it.  And then, there is a much larger group who figure, like me, that it is mostly trash and not worth their time.  That second group is not likely to ever watch it.

More than any other movie I’ve seen this year, this film is peculiarly relevant to an almost singular moment in time, a moment that Baron Cohen (and the other producers) were likely very aware of when they finally rushed their movie to release (after a totally secret production) on October 23, 2020 – in the middle of a pandemic and less than two weeks before the all-important presidential election.  You can’t really appreciate this movie at all unless you recognize the importance of that release date: this is not just a comedy film, it is a powerful political statement.  Yes, it has lost a great deal of its impact in the last year, but if you judge this film purely in its political context, it becomes an almost totally different movie.

I don’t suppose that anyone will be able to measure the real impact of this film on the election itself – actually, I wonder if it could possibly change anyone’s mind at all, given the polarization of the country.  People on the right, who voted for Donald Trump, would not, as a matter of principle, ever consider watching this film.  Those on the left, who, of course, would never vote for McDonald Trump didn’t need this movie to motivate their vote.  Those in the middle (were there any?) would, most likely, be too confused about everything to even have time for this movie.

So it isn’t as a piece of propaganda that gives this film its import.  It is more in what it documents.  And in that regard, it is a scathing indictment of the state of politics in our country and the ethical quagmire that defines our cultur.  I can’t be sure, but I’m wondering if the reason the screenplay was OSCAR-nominated wasn’t just that it reinforced a generally ‘liberal’ notion shared by the Hollywood film community, but also that it held up, just for a movie moment, a picture of what we have become.

To be sure, it does not paint a flattering picture of the American Right, the Republican Party, or of Trumpers generally.  In one scene, Borat is in the home of some QAnon believers spouting ridiculous propositions of Hillary Clinton drinking children’s blood with her pizzas.  In another, he is being lectured by an unsuspecting pastor that Borat’s daughter needs to keep a ‘baby’ even though it was ‘implanted’ by her own father – him.  There’s a particularly gross scene where a Southern debutante ball is ruthlessly exposed as a puffed-up celebration of female puberty.  And then, of course, there is the famous climactic scene involving Rudy Giuliani, where he is stuffing his shirt back into his pants after, supposedly, getting turned on by a sexy journalist who is just fifteen years old.

Let me digress a moment about that ‘sexy journalist’.  In the movie, she is Borat’s daughter, Tutar Sagdiyev.  Maria Bakalova, an unknown (at least to me) Bulgarian actress plays this role and received an Oscar nomination for Supporting Actress.  Born in 1996, she is indeed young, although not exactly 15 at the time of her encounter with Giuliani.  It is clear that she has immense fun with this movie and, I suspect, she will be appearing in many more movies, even outside of Baron Cohen’s films.  Whether she deserved a nomination for acting, I’m not sure.  But once you realize how much real acting she had to do for this film, you start to realize her huge reservoir of talent.

And that starts to get at the ‘other side’ of this movie!

Very little of this movie occurs on a ‘set’ in the standard notion of that term.  When Bakalova is doing her country’s ‘puberty’ dance at the debutante ball – that wasn’t a movie set – that was a real debutante ball somewhere in a southern state.  Aside from Cohen and Bakalova, and someone operating a hidden camera, those were real people in that room – people who had gathered for a tradition, that, however you want to characterize it, dated back generations.  That Bakalova could continue dancing, even as the reactions were building, is an amazing comment on her ability to separate her role from her own persona.

And the debutante ball is just one of many scenes where Cohen and Bakalova (together or separately) play their game of deception on people in order to generate incredibly repulsive reactions.  In many cases, however, the separation from ‘real’ scenes to ‘faked’ scenes isn’t clear.  In the climactic, Giuliani scene, for example, the 15-year-old Tutar/Bakalova is seen leading Giuliani into a bedroom for, what we are supposed to believe, were opportunities for illicit sex.  But we only see Giuliani’s back during that sequence, never his face – was it really him?  And we never see what happened just before he is ‘tucking his shirt into his pants’ – was it after some kind of sexual act, or was he simply rearranging his clothes after removing a hidden microphone?  We don’t know for sure.  But, since the camera people were actually part of the film’s camera crew, it seems to me they would have more visual evidence that Giuliani had done something wrong?

Here we are then, at the real problem with this movie – is it guilty of the same fake portrayals that us liberals want to believe are rampant on the right?  Does this film commit the most egregious of actions by essentially amplifying behavior to the point of distorting it?  No doubt Rudy found the Bakalova character sexy and might truly have been interested in her.  But did he actually act on those urges, or did he control them, as would any ethical man, liberal or conservative?

In my review earlier this year of The Mole Agent, I argued that there was an ethical issue because the ‘agent’ wasn’t honest with those he interacted with in regards to who he was or what he was doing there.  Is there any difference between that movie (a supposed documentary) and this one (a supposed comedy)?  If anything, the deception in Borat is even more severe.  Yes, I get that it is so over-the-top that it shouldn’t be a surprise to anyone.  But in some sense, when it is this absurd and extreme, isn’t it all that more shocking?  Yes, the scene with the Georgian FedEx person apparently helping Borat engage in child trafficking, appears to be an shocking example of, not just unethical behavior, but possibly of a crime.  But what would the reverse scenario look like if a right-wing Borat had confronted a welfare worker and offered a bribe to let someone continue receiving benefits who really didn’t deserve them?  Are liberals really that desperate that we have to get down in the gutter with our enemies?

I just can’t go there quite yet!

Even with Bakalova’s superb acting considered, this truly is a ‘filthy’ movie.  (1 Star) 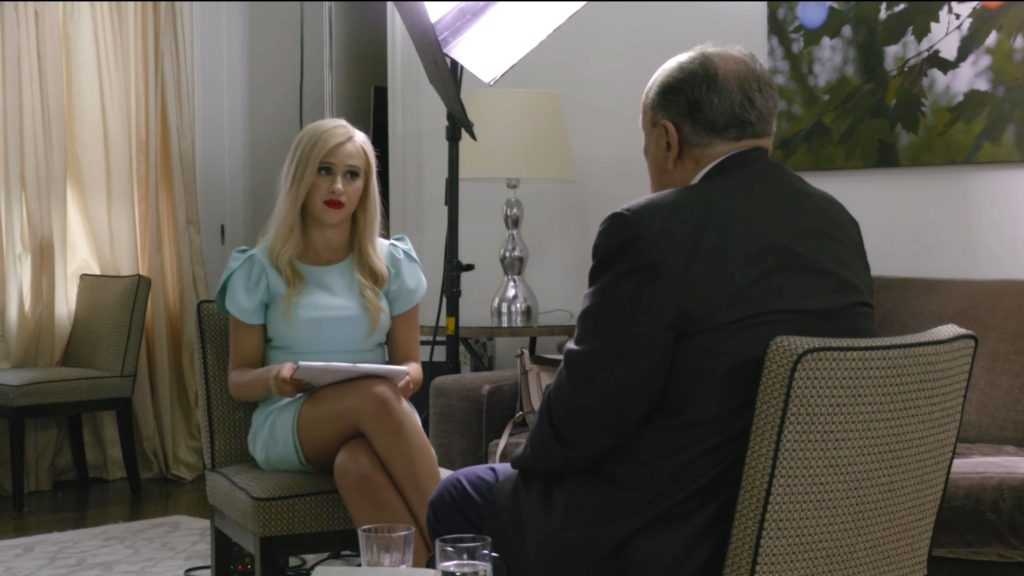