(4 Stars) Tight and Powerful indictment of the authority of the Catholic Church. 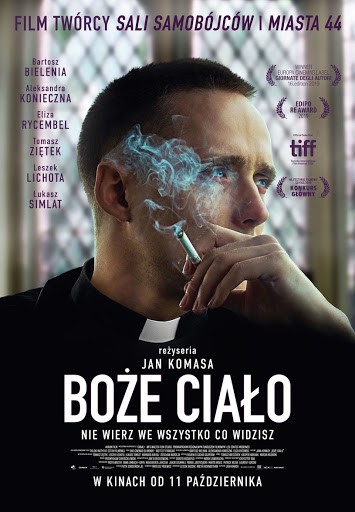 I haven’t seen Parasite yet – the winner of both the International Feature and the Best Picture Oscars – so I might change my mind.  But so far, Corpus Christi is my favorite International film.  From Poland, the film has absolutely nothing to do with Texas and everything to do with small town Polish life and the important role that the Catholic Church plays in structuring and guiding that life.

Daniel has recently been released from ‘juvie’ and moves to a small town, originally to take a job in a sawmill.  During his incarceration, Daniel played an important role in the Catholic rituals and not only learned much about how a ‘priest’ performs his role, but also how church ministrations of forgiveness and love could guide his own behavior.  Although he thought of himself as a good candidate for the priesthood, he is advised by the prison clergy that, because of his record, no seminary will ever accept him.

His first stop on arrival at the sawmill town is at the church where he encounters a young woman, Eliza.  From there, he slips into telling one little lie after another until he actually takes over from the town vicar and becomes the priest that he always wanted to be.  Although built on lies and deceptions, Daniel’s transition into Father Tomasz changes both him and the town in many important ways.  We watch with amazement has his good intentions translate into healing the town in a very significant way – this fraudulent ‘priest’ does more for the town in a few weeks than the legitimate church had done in years.  (And along the way, he drinks, smokes marijuana, and sleeps with Eliza – all behaviors that aren’t exactly priestly!)

We know from the beginning that Daniel is not a legitimate priest and, therefore, that a key plot element is that he will be exposed as a fraud.  But even so, it isn’t possible to ignore the amount of good that he does, even if he is obviously flaunting proper authority.

This isn’t a big movie in any sense of the word, but the film works in so many ways that big-budget Hollywood so often fails to achieve.  The script is tight and the editing smart – although it moves a little slowly at the beginning, there is little unnecessary messaging.  Most, if not all, of the movie is filmed through a blue-green filter which has the effect of mellowing the contrasts and accentuating the pain that people feel.

Perhaps the movie’s biggest strength is the lead actor, Bartosz Bielenia.  As others have noted, he looks like a younger incarnation of Christopher Walken right down to the intense blue eyes.  His facial expressions suggest the measured moral conflicts he is constantly experiencing as he navigates his way through his fantasy.  In the end, he says nothing, but says everything, as he exposes his own duplicity.  It is a tense scene.

Director Jan Komasa is an unknown to me, but he has managed a commendable production.  Perhaps the strength of the movie comes from his own moral position.  About Corpus Christi he has said “I feel the common threads in almost every country I go to – in Germany, in France, in England, in America – this same polarization.  Disgruntled masses of people who feel rejected and totally dismissed by this elite bubble.  Poland is not an exception.  We are struggling to reconnect.”

Daniel succeeds in reconnecting a town desperately in need of it.  But, in the end, it is the power and authority of the Catholic Church that fails to recognize the goodness that had been done.  They reestablished control, but at what cost to the people? (4 Stars) 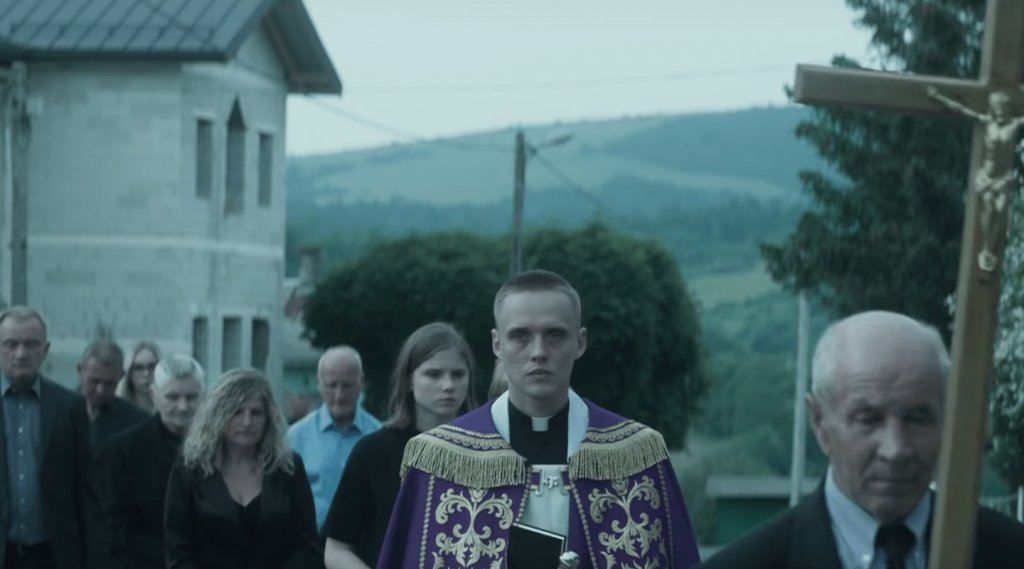