(4.5 Stars) A sometimes difficult movie to watch, but with powerful moments. The boundaries between love and hate are thin. 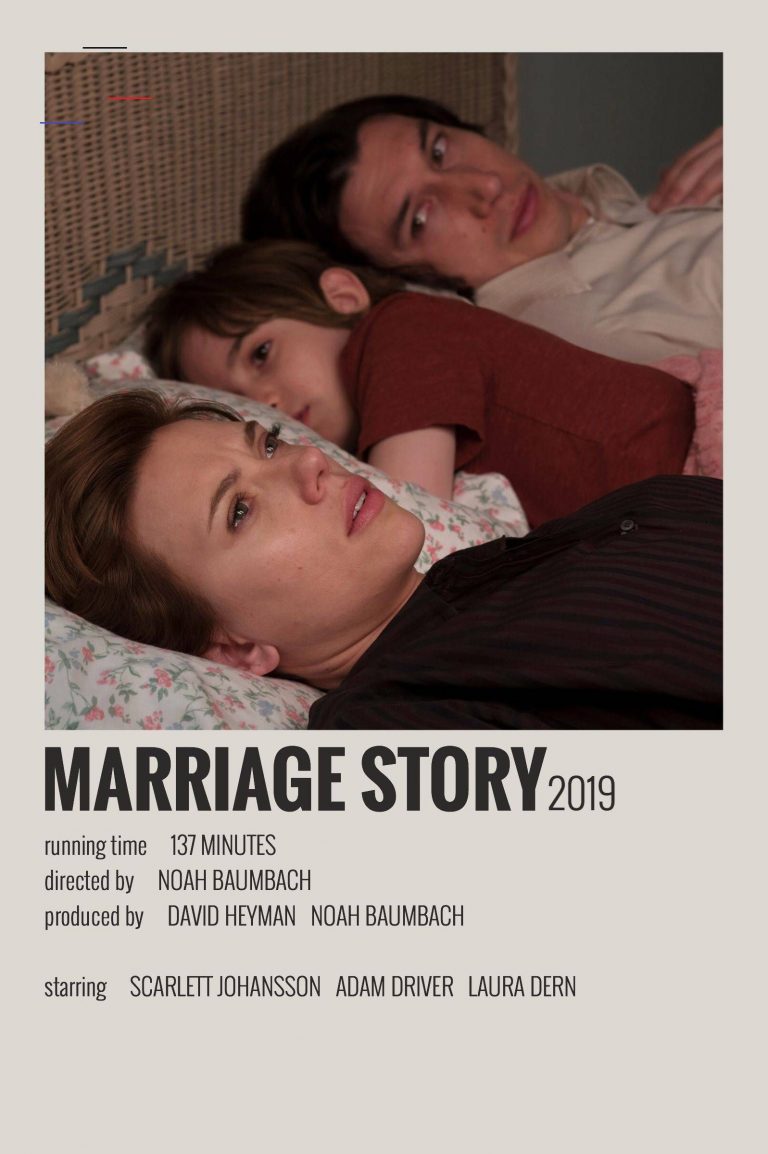 I don’t know what the current percentage is of first marriages that end in divorce, but it seems that divorce has become almost as popular as marriage. Divorce has, simply, become a reality of life for most Americans.

Marriage Story is written and directed by Noah Baumbach, whose parents were divorced when he was an adolescent.  That experience formed much of the background for his first big movie, The Squid and the Whale (05).   Baumbach’s first marriage, to Jennifer Jason Leigh, resulted in a son Rohmer, born about the time their marriage was starting to fall apart.  His marriage to Leigh ended in divorce finalized in 2013.  This movie, Marriage Story, is based on that divorce.  (Just to carry the personal story to current times, his current partner is Greta Gerwig whom he started seeing in 2011, and they also have a son.  She, by the way, directed Little Women, another entry in this year’s Best Picture race.)  Clearly Baumbach has a life-long perspective on marriage and divorce and is qualified to tell the story.

The story is told through the eyes of Nicole and Charlie.  Charlie is a New York City theater director who loves telling people how to behave.  Yes he definitely has a controlling character – how else should a stage director behave?  Nicole, raised in L.A., came to New York, got involved in one of Charlie’s plays, and stayed to marry and have a child, as well as continue her acting career.  Charlie, it appears, is fairly supportive of both of these efforts and clearly loves his wife.  In many ways, they have the ideal relationship.

Baumbach employs a device that many of us in divorce will recall – the ‘Why do I Love You’ exercise.  It is something mediators in divorce use, directing both parties to write down, with heartfelt sincerity, all the reasons they fell in love with their partner.  I remember doing that – it is supposed to set the stage for negotiating amicable separation terms.  The idea is that if you can remember, for a moment at least, all the good things about your estranged partner, then maybe you can be a bit nicer.  Based on my experience, it works.  For a little while.  Maybe a very little while!

The letters Nicole and Charlie write to each other are romantic, touching, and illustrate a love that flowed deep and broad.  We hear them read their letters in voice-over, accompanied by scenes of the happier times.  It is an extremely effective way to show that there were, indeed, real reasons why these two got married in the first place and created a child.

But, at least in today’s world, things never stay the same.  Charlie achieves a real degree of professional success which seems to do two things.  First it reinforces his ‘directorial’ impulses, probably leading to becoming more controlling, not less.  And secondly, it creates an unhappiness in his partner because she, struggling with the bulk of the child rearing chores, is unable to realize a degree of equal success in her career.  Nicole becomes increasingly unhappy.

Seeing an opportunity back in L.A., Nicole decides to separate from Charlie and move back to be with her mother (Julie Hagerty) and pursue some independent opportunities in film.  Needless to say, this doesn’t sit too well with Charlie, especially when he realizes that she will be taking Henry with her.  This conflict between the coasts is another really good writing point.  For anyone who has lived in either place – I’ve lived in both – the competitions between the coasts is as big and real as any battle between separated parents.  The two towns become a terrific metaphor for the separation battle that is about to play out.

Charlie tries to accept Nicole’s move for independence, and seeks ways to make it work.  He decides to commute back and forth regularly (Nice that he has the financial means to do so!) and even moves from a nice hotel into a rented apartment.  The two really tried, for a while, to make things work.

Then the Divorce Machine kicks in (that’s my term, not the movie’s) as Nicole, prodded by her Mother and feeling a little powerless, gets an attorney.  Laura Dern plays Nora Fanshaw, a celebrity divorce attorney modeled off a real one with a similar name.  Dern won the Oscar for this performance which includes a terrific monologue about how women’s roles in divorce are sexist and unfair (I won’t get into my opinion on that subject!). Nora has only the best intentions for her clients, but she does tend to see the entire process through only one lens.  And, in the end, she moves Nicole towards a more aggressive path than I think she originally wanted.  Now maybe it works out to be more in her best interests, but it is part of how the Machine is so successful at cranking out divorces.

Yes, they try mediation, but no, it doesn’t seem to work.  And, finally, Nicole ends up serving divorce papers on an unsuspecting Charlie who is devastated by the prospect of losing his family.  Charlie first finds a sappy lawyer in a funny Alan Alda character, but, after seeing that Nora is going to tear him to shreds, he finally hires his own shark-in-a-suit, Jay Marotta (Ray Liotta).  The lawyers do what they were hired to do which is reduce the opposing side into shriveling images of themselves, unrecognizable to the beautiful people who first entered the marriage.

Then there is the inevitable fight scene.  Baumbach films it in one take and I understand it took more than 50 attempts to finally get it right.  It is a withering scene exposing the worst sides of both people, peppered with humor that suddenly turns into sullen anger.  Anyone who has gone through divorce will recognize themselves, unfavorably, in some part of this scene.  It is ugly, but it is real.

And, so, even though this is a beautiful movie about divorce, it is called “Marriage Story”.  Perhaps Baumbach is trying to tell us something about the inevitability of divorce.  If you get married, then divorce might be the climactic chapter of your own marriage story.  But I also think that, despite all the terrible arguments and the terror of sheer emotion that Driver and Johansson are able to show, the story curiously ends somewhat upbeat.  The divorce is ugly and mean, but it is part of the journey that they must both get through.  They do manage to emerge on the other side, changed and perhaps scarred – they’ve experienced another critical event in their life story.

From that perspective, I enjoyed the movie and thought it extremely successful, even if parts of it are far from enjoyable.  But we never do manage to see what happens to Henry, the child – it is the children of divorce who, because they are so powerless, are affected the most.  (4.5 Stars) 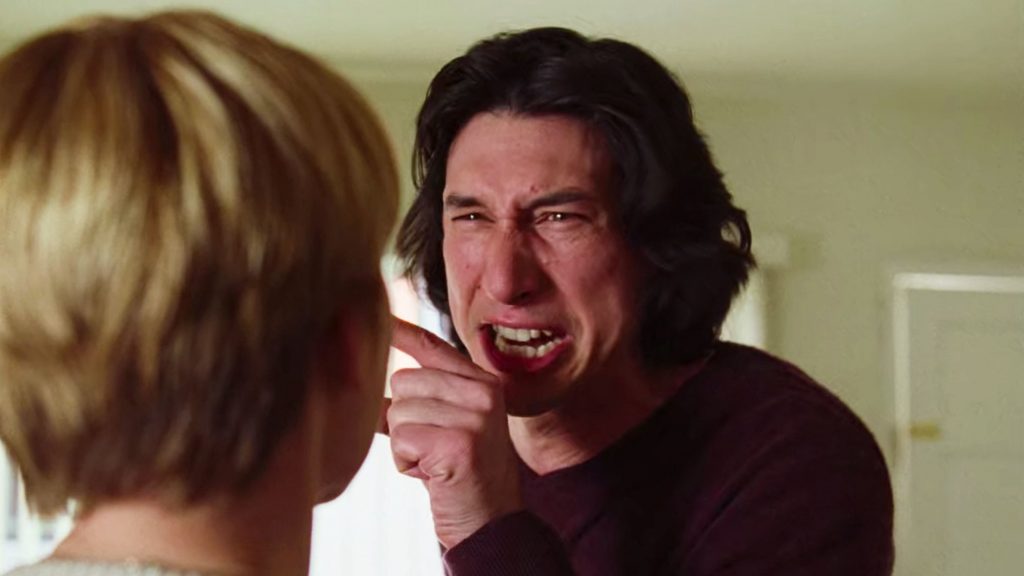