(4 Stars) A remarkable film documenting how a summer camp experience turned into a national political movement. A movie of commitment and hope. 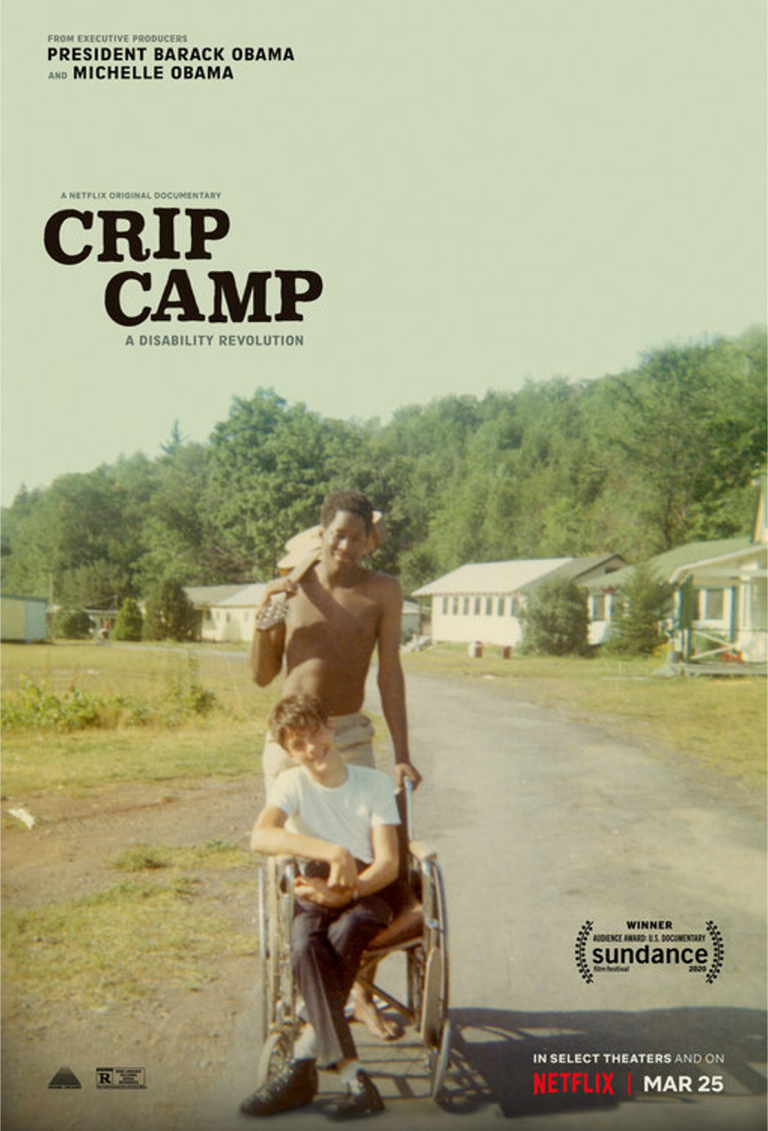 The butterfly effect, in chaos theory, suggests that minor changes in initial conditions can have dramatic effects later as causal changes ripple through time.  The term was used to suggest that even the random flutter of butterfly wings in Africa could change the path or strength of a later hurricane as it barreled towards the Caribbean.

Crip Camp is a moving example of how the principle works in the social world as it traces the impact of a seemingly simple summer camp experience on several of its disabled campers as they become national leaders in the movement for equal rights for the handicapped.  Ben Kenigsberg (New York Times critic) wrote that the film “Makes the case that a Catskills summer camp for the disabled fostered a sense of community and creativity that fed directly into the American disability rights movement in the 1970s.”  The strength of the movie is in how it manages to draw such strong lines between the teenage summer camp experience, and dramatic, nationwide political change.

The documentary is the product of multiple collaborators.  The Obama’s Higher Ground production company bought the film at the Sundance festival and their backing brings it obvious credentials.  James LeBrecht, co-writer and co-director with Nicole Newnham, attended Camp Jened, in the Catskills of New York,  in the 1960s as a teenager.  The summer camp had been founded in 1951 by a group of parents of disabled children who were trying to find an outlet for their kids where they could feel free to play a game of baseball without being afraid of the response of others.  LeBrecht had spina bifida and was permanently confined to a wheel chair.  Partly as a result of his experiences at the camp, he became interested in audio engineering, got a college degree, and moved to Southern California to work in the film industry.  (He has worked in the sound department of several movies).  After reuniting with one of his fellow campers, after several decades, he got the idea of creating a film about his experience at the camp, secured partners, and the result is an Oscar-nominated movie.

This film, like so many of today’s really good documentaries, adopts a perspective I like to call ‘the really long view’.  LeBrecht is able to uncover home-movie style footage of hours at Crip Camp, more than five decades old.  The grainy and choppy, hand-held style does not detract from the experience but, instead adds to the realism – this could easily be the summer camp that we went to when we were teens of the sixties.  He could easily have made the entire movie focusing on the found footage.

But he didn’t stop there.  Instead he traced the steps of several of the campers through the next several decades.  Many of the campers, finding strength in the community and freedom they had enjoyed at that camp, end up becoming leaders in the movement for equal rights for the disabled down through the 70s, 80s, and 90s.  LeBrecht finds uses footage from newsreels as well as personal recordings to document hearings before Congress and administration officials.  There is extended coverage of the San Francisco 504 Demonstrations where, against unusual problems like managing catheters and sleeping in wheelchairs, disabled people mounted a 3-week sit-in at government offices trying to secure enforcement of a law mandating disabled access to services of any agency or organization getting federal money. The sit-in succeeded when HEW secretary Califano finally signed the regulation several years after it was originally mandated into law.

During the Reagan 80s, budget constraints largely forced recognition of rights for the disabled into the background, but by 1990, and thanks to the efforts of several of the campers from Crip Camp, the Americans with Disabilities Act (ADA) of 1990 was signed by George H. W. Bush (the first Bush) and became the law of the land prohibiting discrimination against the disabled.

The movie ends with some of thecampers returning to the original site of the camp just a few years ago.  The camp had closed in 1977 and when they got there, the buildings were all gone and the site was being converted into some other use.  Still, even after several decades, one camper said “I almost want to get out of my wheelchair and kiss the fucking ground.”

Taking this ‘long view’ of an issue requires an immense amount of patience and a strong ability to maintain a particular thread throughout the hundreds of hours of potential footage.  Last year’s documentary nominees included films like For Sama, and  American Factory which tracked events over three or four years.  In Edge of Democracy, we get a telling of the Brazilian history over a decade or so with remarkable access to the inner workings of government there.  But Crip Camp is unique among recent documentaries in chronicling the lives of people over such an extended timeframe – We start in the sixties and end sometime in the last few years.  In many ways, the movie reminded me of Michael Apted’s Up series of feature films. To maintain a consistent message over such a length of time and such a varied combination of sources, is a remarkable accomplishment and is testimony to the commitment of LeBrecht to his message and his love for his friends.

In the end, this movie is about hope and compassion.  Summer camp sometimes has huge effects on the campers, but in this film we see how people, sharing so much in common, learn that they are neither invisible nor powerless.  We see them grow as people sitting around the table discussing typical teenage issues like freedom, recognition, sex, even the right to be alone.  But with these campers, the issues seem much more profound.  And then, over the course of the next two decades, collapsed into an hour in the film, we see how they take what they’ve learned and transform themselves into major players on the American scene with a commitment and enthusiasm that most of us would be hard-pressed to emulate.  And then, at the end of the movie, everything comes back, full circle to the place where it started – radically different and yet so memorable.

Disabled people face incredible difficulties.  But as this film shows, they sometimes experience the world with an intimacy and a potency that most of us can only wish for.  And, as this movie so easily demonstrates, the flutter of a butterfly’s wings can ripple and grow through time into a powerful storm.

(As the first of this year’s five nominated documentaries, I think the bar has been set extremely high.  Looking forward to the rest. 4 Stars) 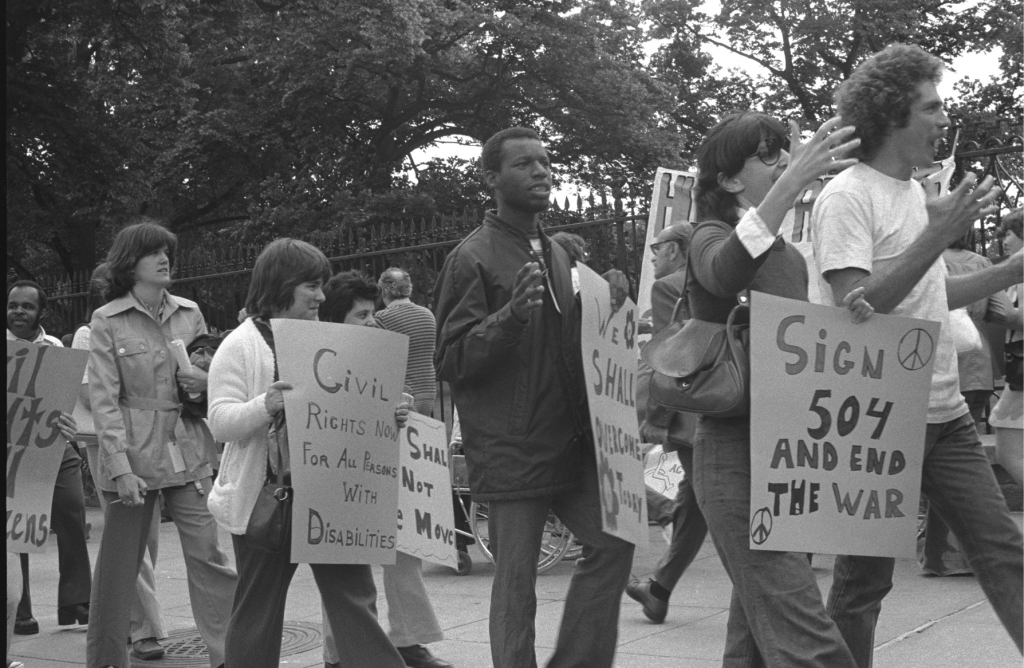