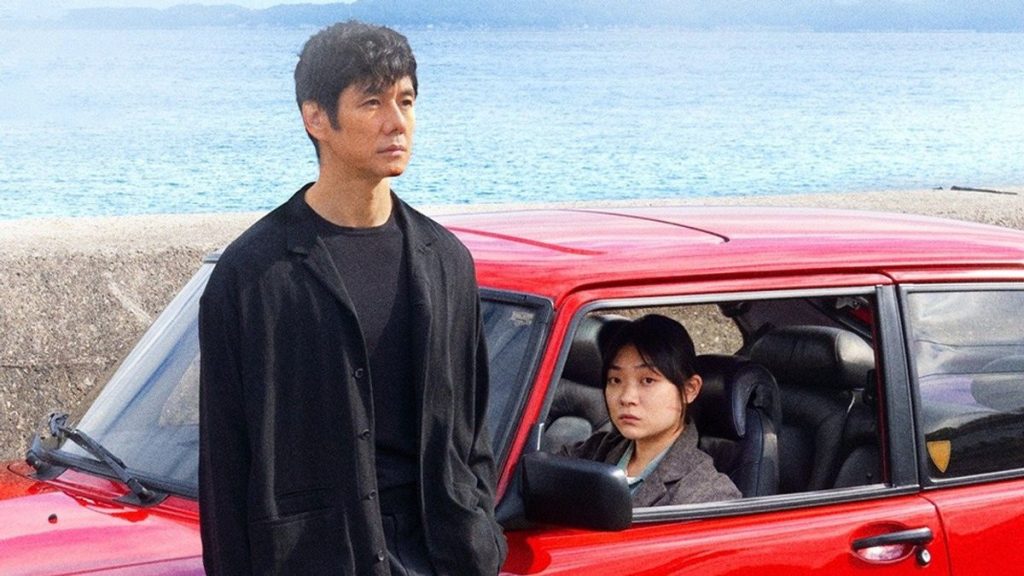 Drive My Car is not going to please all viewers.  In fact, while I almost always recommend that everyone see all Oscar-nominated movies, this one might be this year’s only exception.  Why do I say that?  Let’s start with the length – at one minute shy of three hours, this is probably the longest film in this year’s collection and it requires a patient viewer to sit through a three-hour drama that is based almost exclusively on dialog.

The prologue to the movie, playing before the credits, goes on for nearly 40 minutes.  It does introduce us to three of the four major characters and, because of all the background information it conveys, eliminates the need for flashbacks in the rest of the film.  It sustains your interest in many ways – by introducing the subtle cinematography employed throughout and explicitly portraying the intertwining sex lives of the three main characters – but it is still half the length of many movies!  The prologue also introduces the red SAAB with the left-side steering wheel in a country where all the rest of the vehicles have the opposite configuration.  The car, of course, becomes a major element of the drama, but only because it is the contained and controlled environment where many of the most important conversations are had!  (If you are expecting action sequences in the car, forget it!)

After the prologue, the film enters a second section, which goes on for probably another hour and a half.  During this section of the film, we watch with some interest as the two male characters from the prologue are now engaged in an intense battle, of sorts, all framed within the context of staging a play.  Much of this second part of the film is consumed with the actors in this play reciting their lines, over and over again at the insistence of the director, our main protagonist.  I intentionally use the word ‘reciting’ and not ‘rehearsing’ as during much of this time, the actors sit around a table and literally ‘read their lines’.

That’s not all they do, of course.  There are some very interesting interactions between the two men both in bars and also in the red SAAB as they discuss the play they are working on, as well as the woman that they both loved – (although in different ways!). And there is much more to think about in this long section of the movie.  One of the interesting features of this particular production is that the actors, in the play, have been chosen to represent several different countries in Asia, and they are asked to speak their lines in their native tongue.  Which means that the play is going to be performed in at least six different languages – and the actors do not necessarily understand what is being said, except to the extent that they remember the original text of the play.  (One of the actors is mute and so her lines are signed in Korean Sign Language, which is at once both beautifully expressed as well as adding yet another floor to the Tower of Babel.)

Critical to understanding this film is to also understand Anton Chekhov’s play, Uncle Vanya. After my first viewing of Drive My Car, I felt I needed some additional help, so I had to take a crash course in this particular play.  It turns out that not only is this the play that the characters are trying to stage, but also that the underlying relationships between the main characters are mirrored in the Chekhov drama.  So understanding Uncle Vanya will help you understand Drive My Car – at least that’s the theory.

Once I started down the Chekhov thread, I quickly entered another rabbit-hole called “intertextuality”.  Apparently there is an entire film-school course on this notion which, in simple terms, means that a film expands its meaning by quoting directly, or by implication, from another work of art.  In this case, the writer and director of Drive My Car (Ryusuke Hamaguchi) brought in Chekhov’s play – Uncle Vanya – to serve as a way of reinforcing the main themes of the film.  While the movie is in no way an exact replication of the play, it still manages to metaphorically use many of the same character relationships, thus achieving “intertextuality”.  (There is an early example of this concept in the prologue where there is an “intertextual” quote from Beckett’s Waiting for Godot.  I should also note that the original short story, of the same name, by Haruki Murakami is also quoting a Beatles Song!)

If all of this is starting to sound a bit much, I guess that is my point.  Joan and I watched it the first time, on Monday, and when it was over kind of looked at each other a bit perplexed.  Understanding, and appreciating, this film was going to require some work and some more time.  Joan, after sitting for three hours,  didn’t care to expend that time, having “better things to do.”

Being a movie reviewer, I wasn’t so lucky.  I spent Tuesday researching this film, Chekhov, Uncle Vanya, the director (and his co-writer Takamasa Oe) and reading several other critical and popular reviews of this film.  Wednesday, I watched the thing again – the full 3 hours.  And, I have to admit, all the work paid off – I got a lot more out of the movie the second time around.  The characters made sense, I understood, mostly, what the Uncle Vanya references were about, and I appreciated that Ryusuke put an awful lot of thought and effort into putting this story together and filming it.  But…there are still limits.

The third section of the film centers on the relationship between our main character and the fourth character in the film, the stoic driver of his car, Misata.  The explanation of why this young woman is driving his car is rather convoluted, but works in the context here.  What is important is her development.  Throughout the second section, she is a mostly unknown.  But in the final section the emotions that bind her and her passenger become very clear and we understand not only these two characters, but also the meaning of the Chekhov play.  Frankly, an entire movie could have been built around this last section – it would have been shorter, but possibly just as powerful.

There are plenty of people who loved this film.  Of the 28 competitive Oscar-nominated films in this year’s list, it is tied with The Worst Person in the World (next week’s movie) for number 1 in the Metacritic Score with a 91.  And it ranks sixth out of the 28 in audience appeal (although we need to keep in mind that ratings were supplied by people who chose to watch this film and thus had already made a commitment to a three-hour experience).  As Japan’s entry, it won the International Feature Oscar this year and was nominated for the Adapted Screenplay, Director, and Best Picture Oscars.  In short, certain people rave about this film.  I’m guessing that most of these ‘certain people’ are theater or screen critics or otherwise deeply embedded in the business.

I gave this film a good 12 hours of my time to get to the understanding that I have, which is still nowhere near perfect.  For example, I still do not exactly get the character correspondences between the film and the play.  And, I believe I understand the fundamental premise behind both of them (it is explained in one very long monologue in the car by one of the men.). But just how significant is that bit of moral guidance? – seems to me that lots of people, and lots of works of art have raised that point many times before now.  So how is this expression worth the amount of time it takes to get there?

The question I would ask is whether a good film should require that much work?  Can it be considered a successful film if the average, intelligent, person will require more than two viewings and a fair amount of research to figure it out?  Maybe this film is something to be dissected in film class like a cadaver in an anatomy class.  But we don’t take the cadaver home to put on the dining room table.  Manohla Dhargis (New York Times) wrote that Chekhov himself said “When a man spends the least possible number of movements over some definite action, that is grace.”  So does Drive My Car have “grace”?

I fully get the complexities of this film, but I can’t, in good conscience, recommend that the average, intelligent, film-goer will find it worth their time.  So, you’ve been warned!  (3.5 * – only for those with the required time and energy!)

Streaming on HBO Max and for rent on Prime Video, NetflixDVD, & other DVD rental services PrevThe Eyes of Tammy Faye
The Worst Person in the WorldNext