The Eyes of Tammy Faye

(3.5 Stars) Great acting from Chastain, and overwhelming makeup, but kind of a mess of a movie. 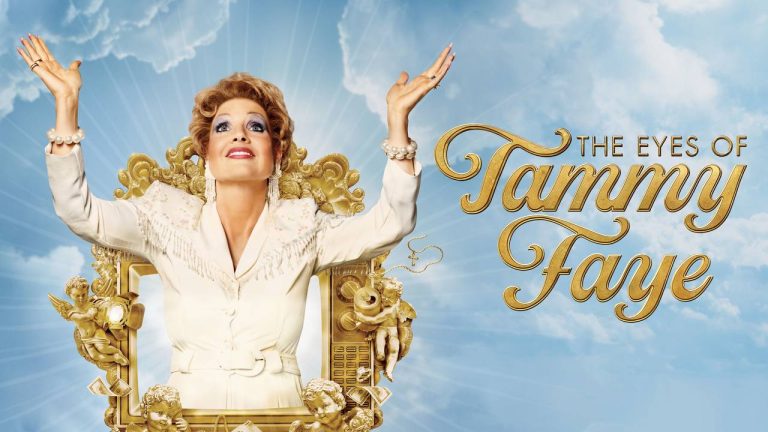 Who was Tammy Faye?

That is the central question The Eyes of Tammy Faye tries to answer and, after watching it twice, researching some history, and spending four days thinking and writing about it – I’m still not sure I have an answer.

To many she was an inspiration and, with her husband Jim Bakker, a spiritual guide to redemption.  To others, she was a witless dupe, taken in by her husband down a path of fraud and deception, conned by the same psychology that took millions of dollars from Praise the Lord viewers around the world.  And lots of people believe she was a knowing partner to the con and was every bit as guilty as her husband.  The Eyes of Tammy Faye doesn’t paint any exclusive picture of which of these Tammy Fayes might be the correct one – or maybe the movie’s answer to the question is that she was all of them – it just depends on how you look at her.

I have to admit that I’m uncertain how I feel about this film, given that I come away even more confused than before.  I understand that people are complex and that they can be viewed differently depending on circumstances.  But the point of a movie is to tell a story and how successful can it be if you can’t determine what the story really is?

This biopic drama is, oddly enough, based on a real documentary of the exact same name, released in 2000.  I haven’t seen that film, but  A.O. Scott (New York Times) wrote that it “…understands Tammy Faye as a camp figure, earning both sympathy and ridicule, and emerging with a measure of  dignity intact.”  This current version, he continues,”…lack(s) the style and the nerve to convey either the wildness of the character and her milieu or the pathos of her story.”

So what’s to blame?  Jessica Chastain’s acting?  Well, I don’t think so and neither do most viewers nor the Academy who gave her the Leading Actress Oscar for this performance.  (Oscar-nominated twice before –The Help and Zero Dark Thirty-I actually think her best performance was in Molly’s Game).  As Tammy Faye, Chastain breathes incredible life into this character and manages to convey all the deep insecurities and surface confidence that hallmarks Faye’s complex personality.  I thought she was particularly good in the ending scenes, when, at the absolute low point of her life, she never gives up and tries, pathetically at times, to resurrect past fame.  In comparing Chastain’s performance against those of Colman (Lost Daughter) and Kidman (Being the Ricardos), I can see how she won the Oscar.  Kidman was faced with an impossible task – I’m not sure anyone can play Lucille Ball; and Colman’s character, although somewhat mysterious, wasn’t likable at all – it is difficult to relate to an “unnatural mother”.  So I can see how Chastain beat those two.  (And I haven’t yet seen Penelope Cruz or Kristin Stewart’s performances).  So the problem with this film isn’t Jessica Chastain.

The film also won the Oscar for Makeup & Hairstyling.  Tammy Faye was famous for the quantity and quality of makeup she applied, so it would be assumed that any actress playing her would also have to wear gobs of it.  But even more interesting are the prosthetics the makeup artists used to alter Chastain’s face to look like Tammy Faye.  Chastain wears cheek enhancers and likely also some nose appliances to make her look more like Tammy.  (In side-by-side pictures during the credits of the real Tammy and Jessica’s Tammy, the resemblance is remarkable).   (I’ve only seen two of the five nominees in this category, but the work on Chastain is worth the Oscar win over Dune!).

An interesting aside is comparing the criticism of Chastain’s Makeup with Kidman’s in Being the Ricardos.  In both cases, the prosthetics and makeup were so thickly applied that the faces ended up being stiff and almost mask-like.  But Kidman’s makeup was roundly criticized while Chastain’s wins the Oscar.  Why?  Clearly because the characters they played had very different relationships with the makeup.  Tammy Faye’s was indeed almost a mask, while Lucille Ball was known for the plasticity of her face and how her facial expressions conveyed much of her comedy.

Jessica Chastain wasn’t the only actor in The Eyes of Tammy Faye and maybe we should look at the other leading actor.  Andrew Garfield plays Jim Bakker, Tammy Faye’s husband and, as portrayed in the movie, the reason for her fall.  Garfield was extremely busy the last couple of years – he’s in three of this year’s Oscar nominated movies.  He plays the leading role in the Spider-Man movie, this year’s highest rated Oscar-nominated movie by the viewing public.  And, more importantly, I think, he was nominated for Leading Actor for his performance in tick, tick…BOOM!, the movie I reviewed last week.  I thought he was terrific in that movie and surprised he didn’t actually win the Oscar for that performance.

As Jim Bakker, though, he plays an entirely different character.  While this shows the diversity of his talents, I’m not sure he is convincing as Bakker.  But, and this starts to get at the problem with this movie, just which Jim Bakker are we asking him to be?  The evangelical preacher saving souls?  The con artist piggy-backing one money-raising scheme on top of another all the while skimming off contributions to fund an incredibly rich lifestyle?  The closet-homosexual who hypocritically blamed his wife for a poor marriage while hiding his own indiscretions?   Brian Tallerico (RogerEbert) argued that the Bakker role was “…a truly thin representation of Bakker.”   Is that true, or is the real Bakker just a truly thin character to begin with, and the film has him pegged right-on?

Ultimately any problems with this film, if there are any, are to be found with the direction and the script.  Both the writer (Abe Sylvia) and Director (Michael Showalter) are TV people.  Now don’t get me wrong – there is nothing wrong with TV.  But there is a huge difference in how to tell the story between a TV series with ongoing episodes – and, usually, multiple seasons – and a compact movie experience running around two hours.  The movie format forces an economy of writing in telling a story – the threads all have to come together within a two hour, or so,  timeframe – you don’t have the luxury of continuing them on to another episode.  So people who write television scripts often fail when confronted with the movie format – you have to carefully choose the story lines you want to present because you won’t be able to wrap them all up at the end if you don’t.

I think that is definitely one of the problems here.  The writer and director introduce a lot of themes early on but don’t necessarily bring them together.  What is the point, for example, of Jim’s accident where “his Daddy’s tires accidentally ran over a young boy.”  Early on, Jim buys a Cadillac, which later disappears – why is Tammy not alerted to a potential problem by that?  There is a critical scene where Tammy has lunch with a group of men including Jerry Falwell and Pat Robertson.  It is an interesting exchange and sheds light on Tammy’s acceptance of gays.  But what is the effect of her thoughts on the men there?  And how, exactly, does Tammy’s acceptance of homosexuality influence Jim’s behavior?  Lot’s of threads that leave the viewer sort of perplexed about just what is going on.  In TV, you can resolve a thread several episodes later – in a movie, you only have a limited amount of time.

I mentioned at the beginning that this movie was based on a 2000 documentary of the same name.  I haven’t seen it but I do know that a documentary is a different kind of movie than a drama.  Documentaries do, naturally, have a point of view – they are products of human imagination and so total objectivity isn’t possible.  But documentaries are filled with real images, talking-head opinions, and, for the most part, footage of real events – that’s why it’s called a “documentary”.

My question becomes, then, why would one develop a dramatic movie based on a “documentary”?  If the writer and director feel there is a story to be told, based on certain characters, why wouldn’t you want to examine those characters within a largely fictional story?  What would have been more interesting, in my opinion, would have been to take these two characters and develop a story that amplifies the personalities that you see in them.  Label it as a fiction “loosely based”, but establish a point of view about what you are trying to say and keep to it.  Tell an entertaining and/or enlightening story using the actors you have and pursuing related, but not rigidly true event lines.

In short, I don’t know what I’ve gained from this film.  Actually, I’m more confused than I was at the beginning about just who Tammy Faye Bakker was and what her impact is supposed to be on the world.  I’m not alone in this opinion – this movie was ranked third from the bottom of this year’s Oscar-nominated films by both audiences and critics.  See it for Jessica Chastain’s exhilarating performance and as an example of superb makeup.  But don’t expect much more.  From my viewpoint: The Eyes Don’t Have It!  (3.5 Stars)

Streaming on HBO Max and to rent on Prime Video, NetflixDVD, & other DVD rental services