(3 Stars) Another tale of Neil Armstrong’s life and walk on the moon. Won the Visual Effects Oscar. 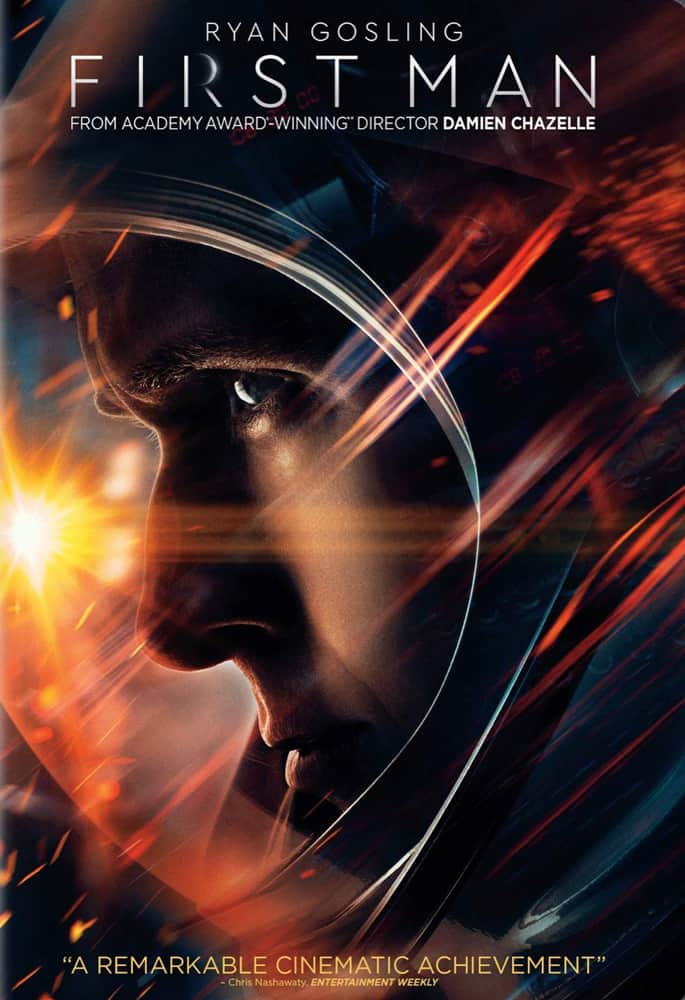 “One Giant Leap into the Unknown.” (IMDB Tagline)

When I write about a movie, one of the important things I like to do is what I call ‘trace the movie’s DNA’. What I mean by that is that I look at the other movies that the cast and crew have worked on – and especially those works that were viewed as important enough to be awarded with Oscar nominations. My belief is that people bring to their current work the same sensitivities and abilities that were rewarded in earlier work.

For example, three of the people awarded this year’s Visual Effects Oscar were also on the Oscar-winning visual effects team for last year’s Blade Runner 2049 and Interstellar from four years ago. Nathan Crowley, who was nominated for his Production Design work on First Man, was also nominated for his work on Interstellar – so at least three key people, involved in developing the visuals for this movie were also working together on a similar movie from four years ago. We would expect that they would bring to this most recent movie many of same characteristics that won these awards before. I, for one, marveled at the visual effects in both of those movies and how they could so realistically imagine alternative worlds. There is, of course, no guarantee that just because someone did something spectacular in one movie, that he/she will repeat it in another. But it is an indicator of what to look for to explain the look and feel of any given movie.

The visual effects in this movie are not like those in the other movies nominated in this category – this is not a festival of computer graphics. I suspect that computers were heavily involved, but the key visuals here are pictures of the earth and the moon, as they would appear to the astronauts who were on these missions. It is the realism of their experience that is the reason for their success. (At just $60 million, First Man is far from the most expensive movie in this category. The fact that they won the Oscar is more a testimony to how important these pictures are in human history, not a measure of how many pixels the computers were managing.)

First Man was filmed and originally intended for an IMAX screen. I can imagine that the opening sequences of this movie and the re-creation of the lunar mission itself, would be fabulous to experience on a really large screen. It is my understanding that some theaters also came with seats that shook and vibrated, just like those the astronauts were in. I’m sure the immersive experience would be rather amazing.

It isn’t bad at all in a regular home theater. The movie was also nominated for the Sound Editing and Sound Mixing oscars. The wrenching metal of the space capsule and rockets during launch and during maneuvers contrasts with the utter silence in space. (There is also a scene where the Gemini capsule is docking with Athena and the soundtrack comes in with cuts from a Strauss Waltz – just like in 2001- A Space Odyssey, which was released the year before the Lunar Landing.) 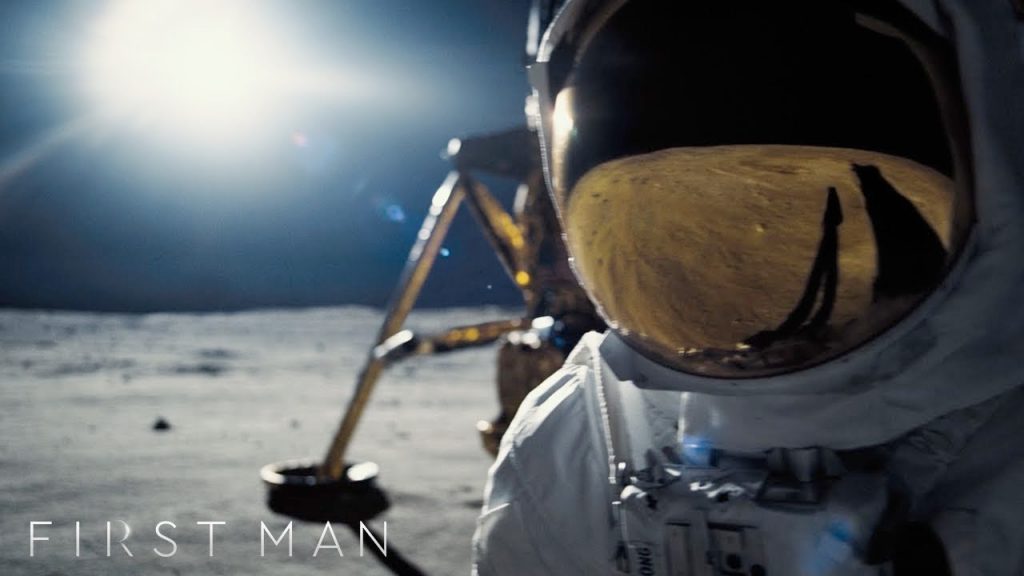 If you look only at the Oscar nominations, this is a ‘below-the-line’ movie – all the nominations (and its only win) are in the technical categories regarding how the story is told. First Man won the Visual Effects Oscar competing with four other films, all of which are basically comic-book action movies.

But there is another line in this movie’s lineage that, although not rewarded by any Oscar nominations, helps define some key characteristics of the movie. So, in the same way that First Man is a descendant of the movie Interstellar and Blade Runner 2049, it also has characteristics traceable to La La Land – nominated for 13 and winner of 6 Oscars in 2017. Although the sounds they create are radically different, the sound editors for these two movies are the same, As is the cinematographer, composer, and costume designer. And don’t forget that Damien Chazelle wrote and directed both movies and Ryan Gosling plays the leading man in both of them. Aside from Sound Editing, these efforts did not lead to Oscar nods in this year’s movie, but it would be foolish to ignore the similarities.

In addition to these two movies, Chazelle also brought us Whiplash from a few years ago. A common thread in all three of these efforts is the amazing persistence of the leading man. In Whiplash, Miles Teller, pursues his drumming despite the abuse he suffers from his bandleader. In La La Land, Ryan Gosling is fully committed to his musical career despite opportunities for happiness down a different path. And in First Man, Gosling’s Neil Armstrong is so remarkably stoic in the face of imminent and persistent danger. Of course, courage and ‘coolness under pressure’ are the expected personalities of test pilots and astronauts, but Gosling’s characterization of Armstrong is the epitome of ‘cool’.

And yet, despite a number of good things going for it, this movie failed to draw a single ‘above-the-line’ nomination. Chazelle did not get nominated for either writing or directing; Gosling did not get a leading actor nod, and, despite a terrific performance as Neil’s wife, Janet, Claire Foy didn’t either! I think I understand why. Despite this being a significant story, it is one where we already know the outcome. Despite the naysayers, Armstrong did land on the moon fifty years ago and immortalized the event with a not-quite-grammatically-correct sentence. We did lose three astronauts in a tragedy that most participants knew was bound to happen at some point. And yet, despite these risks, these men (and they were all men back then), relentlessly moved forward. Whether it was to beat the Russians, or because the moon was simply there, it was an institutionalized obsession on the part of one of the biggest engineering teams ever assembled to get everything right.

If we are to believe the movie, and lots of people say it got most things right, Armstrong might have been the man whose shoes first imprinted the moon’s soil. But this was a huge coordinated effort on the part of, according to one estimate, more than 400,000 people. Armstrong was not so much a hero as he was a personification of the dreams and work of thousands. He didn’t have to do a whole lot except keep on, keeping on. As he says repeatedly in the movie, he need only be ‘Ohkay’! (Yes, he acknowledges to his sons, there is a chance he might not come back – and that’s ‘Ohkay’.)

The amazing performances here are not the roles of individual men, either as actors in the movie, or players on the engineering team. It is rather the entire dedicated effort of a society and a world to seek a new perspective on their place in this world. And that is also why it won the visual effects Oscar – because it succeeded in providing that perspective.

This is an ‘Ohkay’ movie, telling a story that, although some doubt ever happened, is certainly validated by nothing more than the amazing pictures of earthrise that it provided for the first time. For the catharctic experience of putting the viewer in the same place as our astronauts, the movie should be seen and is worth 3.5 stars.