FLEE (4*) A very unique story told in an unusual way. 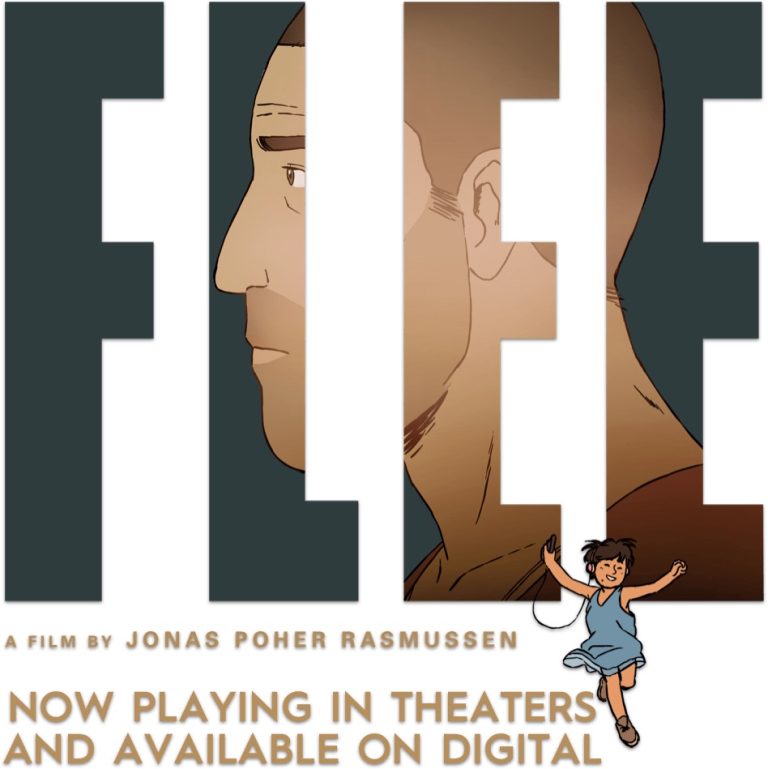 I suspect all of us, at one point or another, imagine our lives retold as a movie.  Some of us even imagine a particular actor that might play our self role.  Although I’m sure that everyone has an episode or two that is worth a story, few of us have such a compelling narrative that is worthy of an entire movie – few of our stories are even interesting enough to justify a movie short.  But Amin Nawadi’s story (FLEE) is so heart-wrenching that a film version is more than warranted and deserves your attention.

Amin is not his real name.  Like so much of his life, he has learned to hide behind lies  and it is only recently, as he prepares to marry, that he realizes he has to finally tell his full story in order to become an honest partner.  This isn’t easy for him, having lived behind a false story for nearly two decades.  And, rather than tell his partner directly, he, instead, confides  to an old high-school friend who just happens to be the director of this movie, Jonas Poher Rasmussen.  The story unfolds in the course of ‘interviews’ between Amin and Rasmussen over four years and Rasmussen audio tapes all of those sessions.  Those tapes provide much of the audio portion of this film and tells the story.  It also gives us a rich vocal insight to Amin’s character, as someone intense and controlled.

The visual part of this movie is where things get interesting.  Although the movie is told under a false name, the person behind that name is very real and so this film is a documentary – and it lives in that tradition with repeated references to real historical events, including TV screen footage of many of them.  But it is also the first film nominated in both the Documentary and Animated Feature categories, so even though it is a documentary, most of it is told in animation.  Amin, and his family, are seen as animated characters, in a relatively primitive 2D animation style.  There is a third visual style – of nearly abstract and minimal black & white figures – whenever events are particularly gruesome or difficult for Amin to remember.  This animation ‘trick’ effectively isolates these events as traumatic without any sensationalism – a brilliant choice on Rasmussen’s part.

The animation, though, isn’t just a collection of visual tricks, it is necessary in order to hide Amin’s identity.  As the title of the movie should indicate, Amin is a refugee.  He has lived in Copenhagen, Denmark for most of the twenty years prior to telling his story.  But, in order to maintain his refugee status, he has had to live behind a lie about exactly how he got there – a lie that includes denying he even has any living family.  Even though he has family members scattered across Europe, officially, and to everyone who knows him, he is all alone – having arrived in Denmark by himself as a high-school student.  To admit to the truth would likely force Danish authorities to send him back to… and, well, that is where the story gets really intriguing.

Amin was born in the early 1980s in Afghanistan and grew up in Kabul.  To understand the rest of his story requires a little history, so let me divert a bit.  I don’t pretend to be an expert on Afghanistan, but apparently around 1978, and with help from neighboring Soviet Union, the Afghan monarchy was overthrown and replaced with a series of weak leaders who never could wrap their arms around the country’s problems.  The country descended into an uninterrupted series of coups, revolutions, invasions, and civil wars throughout the 1980s.  Much of that unrest was aided by United States support of Mujahdeen terrorists in an attempt to disrupt Soviet control.  But the effect on the civilian population was a decade of terrorism, poverty, and child malnutrition.  In 1989, the Soviet Union abandoned Afghanistan with amazing speed.  With no experience building civilian government structures, and with the Soviets failing to provide any kind of transitioning, the country entered into a period known as the Afghan Civil War which lasted until 1992.  During this time the Taliban enjoyed a resurgence which further inhibited the country from enjoying any sense of political or economic security.  (If all of this sounds familiar to recent history in the same country –  replacing “Soviet Union” with “United States” – you come to realize that, in this country, things just don’t change, even if the players come and go!)

Due to this unfortunate history during the 1970’s, 80’s, and 90’s, more than 3000 Afghans ‘disappeared’ (including Amin’s Father), and six million citizens, roughly one-third of the 1979 Afghan population, became refugees.  (There is an historical parallel here to one of the themes in Parallel Mothers.)Most refugees fled to India or Pakistan, but some including some of Amin’s family caught some of the last planes out of Kabul to Moscow. So at the ripe old age of maybe nine or ten, Amin arrives, as an Afghan refugee, in Moscow.

So there is his first FLEE but his story is just getting started.  As you should all know, either because you’re as old as I am, or because you read it, the Berlin Wall fell in 1989 and that was really the first signal that the Soviet Union was ready to crumble and within two years the world’s second superpower collapsed resulting in some of the same social and economic chaos there that Amin’s family had tried to FLEE from in Afghanistan.  (A part of the story that isn’t real clear to me is how a much older brother of Amin’s, who is never named, somehow made it to Stockholm.  From there he was able to provide amazing levels of financial support to the struggling family, although, apparently, at great cost to his personal life.)  However it happened, Amin was provided with the opportunity, not once, but twice to FLEE from another self-destructing country.  (The tales of his attempts to FLEE Moscow occupy a significant part of the movie and are harrowing.)

Eventually, as a high-schooler, he arrives without family in Copenhagen.  And there, in order to protect his and his family’s safety, he must deny that his family is even alive.  You need to try to imagine how difficult this must be, for someone who doesn’t even speak the language, as a 16 or 17 year old, to figure out how to survive without benefit of friends or family.  Oh, and there is one more characteristic of Amin’s which – I will leave unmentioned because it adds a huge dramatic element to the movie – but it also plays a crucial role in his life experience.  Growing up is difficult enough, but to do so with everything Amin brings to the table is nothing short of remarkable.

Despite everything I’ve mentioned above, Amin is far from asking for your pity or even really any help.  One of the strongest features of this film is its tone – the almost “matter-of-fact” documentary-style delivery of such a powerful dramatic story is exceptional in its casualness.  Amin quickly becomes someone you would like to have as a friend.

Rated very highly by both critics and a small viewing public, this movie will not work for everyone.  People who like their documentaries crisp and clean will find the drama of the story a little unsettling.  And viewers who like their animation richly saturated in colors and textures will probably be disappointed.  But if you are interested in an emotional experience that will likely bring you to tears, then give this film a viewing.  (4*)

Stream on Hulu, rent on multiple platforms, or wherever you get your discs!