Lunana: A Yak in the Classroom

(3.5*) Lunana: A Yak in the Classroom is an honest, beautiful, and touching insight into a simple culture. 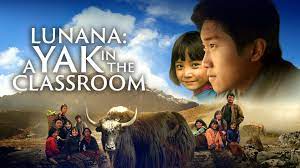 Yes, indeed…about half-way through Lunana: A Yak in the Classroom a yak, named Norbu, does appear in the classroom.  And he stays there during class sessions, and all night long, too.  Norbu is the villagers’ gift to Ugyen, the teacher. Norbu is one of the oldest yaks in the villagers’ herd, but he is still prolific in providing the one element that is the source of everyone’s heat – dung; Ugyen is told to feed Norbu as much as necessary to produce whatever amount of fuel he needs to keep the classroom and his own room warm.  As Saldon, a young village woman that interests Ugyen says: “The bond between a yak herder and his yak is very special, like family.  They are very important to us.”

We have a few yaks here in the Rocky Mountains, but until this film I must admit I didn’t really know much about them.  So after a bit of research I learned a few facts.  A yak is believed to be, most likely, an early genetic ancestor of the North American bison.  Although both are huge – weighing up to more than a ton – shaggy haired, and used for their milk, fiber, and muscle (both alive and dead), the yak differs from the bison in a couple of important ways.  For one it has distinctly different blood cells which make it hard to live at lower altitudes with higher oxygen concentrations.  They are almost devoid of sweat glands, which means they cannot handle heat at all. And they also do not eat grain of any kind and thrive only on grasses which they process much more efficiently than cows do.  All of which means that they are the perfect animal for higher elevations.

And Bhutan, where this film was made, has lots of that.  I remember Bhutan from the Olympics where it was noted that they actually attempt to measure Gross National Happiness (and that plays a role in the movie!).  It was also rated first, a few years ago, among the nations in the South Asia Association for Regional Cooperation (SAARC) in economic freedom, peace, and lack of corruption. The country is slightly bigger than Maryland in size and a little smaller than North Dakota in population.  It is nestled high in the Himalayan Alps with China on the North and India on the other three borders.  Its geography ranges from 660 feet in some of the southern river valleys to almost 25,000 feet in the northern mountains, resulting in some of the greatest biodiversity and range of ecosystems on the planet.  The highest peak in Bhutan, Gangkhar Puensum, is also the highest unclimbed mountain in the world – unclimbed because Bhutan banned mountain climbing in 2003 out of respect for their environment.  That attitude might have something to do with the fact that 84% of the population practice Vajrayana Buddhism.  So is it really a surprise that in this very unusual country you might find a yak in the classroom?

The movie’s main character, though, is not Norbu, but is Ugyen, a young man in his twenties who lives in Bhutan’s capital city of Thimphu (population of 110,000).  Ugyen wants to go to Australia and become a singer, but due to his contract with the Ministry of Education, he still has one more year to serve as a teacher.  In what we are to believe is a helpful insight by the minister, Ugyen is assigned to teach for a few months in the remote village of Lunana – advertised in the movie as not only as the most remote school in Bhutan, but possibly in the entire world.  You get an increasing sense of how remote it is as Ugyen ascends in altitude to different locations that are descending in population. All but the first day of the journey are on foot, with two guides from the village, and three burros carrying their supplies.

The journey up to Lunana begins to capture what is wonderful about this film.  For one, the cinematography is terrific.  Filmed in color and with a letterbox aspect ratio, the movie invites terrific panoramic landscapes and the countryside is more than able to provide them – you will be stunned by the natural beauty of this land.

That isn’t all you see, though.  As you ascend in altitude and become increasingly distanced from the modern world, you begin to appreciate the simple pleasures that this movie delivers.  Then once in Lunana, Ugyen, predictably, becomes more enamored with his wonderfully energetic students, the naturally beautiful young woman, Saldon – who breaks through Ugyen’s defenses using the power of song – and the subtle wisdom of village elder Asha, who becomes the grandfather Ugyen never had.  He begins to change.

The ‘fish out of water’ tale is a story often told.  But what makes this one special is the genuineness of the characters.  Only three of the ‘actors’ in this movie are actors (aside from Ugyen, I’m not exactly sure who the other two are) but the rest are most of the 56 people who make up the village of Lunana, perched very near the Chinese border, at an altitude of nearly 16,000 feet. The village is prosperous – relatively speaking – because it has access to an abundant supply of a medicinal fungi which only grows at high altitudes. Still, the people here have a strong belief in the value of education and, while they strongly believe in their culture as yak herders, they want their children to enjoy a different, and hopefully, better future.

The realism of the Lunana lifestyle is mirrored in the development of this movie.  The crew had to hike up much of the same path that is depicted in the first part of the movie.  They brought their own solar panels to power their equipment.  They built their own living quarters and, because of bad weather, basically didn’t bathe for the three months of shooting – they looked and smelled as bad as the yaks when they finally returned to “civilization”.

I wrote of the movie “CODA”, that it was “a simple tale, simply told”.  And that was true, relative to Hollywood standards.  But what “Lunana: A Yak in the Classroom” gives us is simplicity reduced to its basic terms.  You can find lots of faults with the film – many times the young children’s behavior seems forced, like they were told what to say.  And, sometimes, you can catch them glancing at the camera (I read that the villagers had never seen a movie, much less a camera), so you have to marvel at their ability to “stick to script”.

But, in so many ways, that is the charm of this movie.  It is an honest tale of an honest people.  Whether you accept the character’s transformation or not, you have to believe in the characters surrounding him.  They have a reality that is missing in the modern world, and a spiritual relationship with their yaks that is all powerful.

A conversation between Ugyen and Asha:

Ugyen: Maybe I was a yak herder in my previous life.

Asha: You must have been more than that.  Maybe you were a yak.

Asha: Yaks are very important to us.

(He doesn’t have to say anything more and he doesn’t!)

This movie will be too simple for many.  But if you want a beautiful experience with a culture you likely don’t know, watch “Lunana: A Yak in the Classroom.”  (3.5*)

Stream on Netflix, rent on Vudu, NetflixDVD or wherever you get your discs!

PrevFLEE
The Hand of GodNext

1 thought on “Lunana: A Yak in the Classroom”