The Hand of God

(1*) The Hand of God is an attempt at being Fellini. For an American audience, it is just a hot mess. 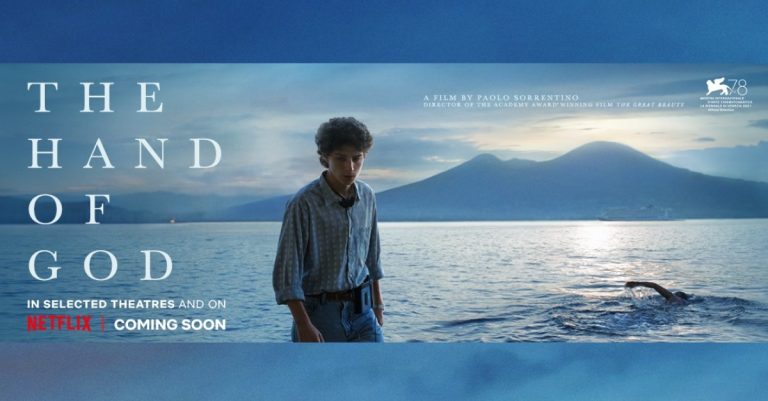 The Hand of God.

What do you think about that as a movie title.  You know it is the name of an Oscar-nominated movie and – because I already told you – it comes from Italy.  So, maybe, like me when I sat down to watch this thing, you thought it might have something to do with growing up Catholic in Italy and maybe God, somehow, plays an important role in this teenager’s life as he turns into a young man.

Catholicism does play a role in this film.  It starts with a reference to the patron Saint of Naples, San Gennaro, who is seen in a formal suit being chauffeured in an old Rolls Royce to a bus stop.  There he picks out an attractive woman – whose taut nipples show through her dress, and whom we later learn is named Patrizia – invites her into his car and then takes her to his home – a rundown and empty mansion with a fallen chandelier and broken tiles everywhere.  He introduces her to a small person entirely hidden in monk’s robes.  “The Little Monk”  slips some money into Patrizia’s purse and, while she is kissing his covered forehead, San Gennaro reaches down and makes a healthy grab of her ass.  So how’s that for saintly behavior?

As strange as all that is, it is only the first few minutes in a movie that is relentlessly, and savagely, strange and disconcerting.  Scene transitions are pretty much meaningless as we bounce around, like pinballs in an arcade game, from one absurd event to another.  For most viewers, I suspect, and this includes my wife, this is not a movie to be enjoyed. (She doesn’t often do this, but she left this film thirty minutes into it and said she’d rather have a root canal!)

I struggled to make sense of this film over the course of the last few days.  I spent hours researching various topics and references in an attempt to find meaning.  And I watched it a second time – taking copious notes – and even stopped the film a couple of times to reflect on what had happened.  But I can’t say it helped – this film just does not work for me, nor, I suspect, most American audiences.

Maybe it is different for Italians.  It turns out that there is a mythical religious figure in Neapolitan folk traditions called The Little Monk and apparently this figure makes legendary surprise appearances in the lives of Neapolitans.  And, of course, Italians are known for having crazy family lives.  (For a while, after my first marriage, I was a part of an Italian-American family that made little sense to anyone, in- or out-side of the family!)

But now, back to that title.  The Hand of God doesn’t have anything to do, really, with God, Catholicism or even religion, unless you count soccer as more of a ‘religion’ for Neapolitans than Catholicism.  The term actually refers to an event in a soccer game in the 1980s.  There was a short Argentinian player named Diego Maradona who was traded first to a club in Spain and then, in what was an outrageous sum of money, to the soccer team in Naples, Italy.  During one game it appears that 5’5” Maradona used his hand to tap the ball into the net.  He, however, was not penalized and his goal was allowed to stand, winning the game for his team.  He vociferously denied that he had ever used his hand (although video clips of the event are pretty compelling that he did).  Instead, he said, it must have been The Hand of God that made the goal.

What, you say?  How does that then become the title of a movie about a boy becoming a man?  Well, I have the same question.  Fabio, the teenager who is the main character in the movie, is an intense soccer fan.  And, in a certain way, that will make sense if you watch the movie – his love of soccer may very well have saved his life.  So, I guess, The Hand of God ends up touching him too.  American viewers of this film, though, will have to be forgiven if they don’t instantly make this connection between Maradona’s cheating and this movie’s story.  But then, American viewers of this film won’t, for the most part, get most of the religious references either, even if they are Catholics!

Written and directed by Italian filmmaker, Paolo Sorrentino, The Hand of God is, supposedly, the tale of his own coming of age, where “almost everything is true.”  (Comparisons have been made to Cuaron’s Roma and Branagh’s Belfast, both recent autobiography’s of important filmmakers.).  Sorrentino’s  The Great Beauty, won the International Feature Oscar in 2014 and he has received multiple awards for many of his other films in Italy and throughout Europe.  Being Italian, it isn’t surprising that he is a keen admirer of the master Italian filmmaker Federico Fellini.  Sorrentino’s The Great Beauty was intended to emulate Fellini’s La Dolce Vita, while this film is his attempt to match Fellini’s masterpiece Amarcord.  If you have seen either of these Fellini films, you are aware that they are challenging to watch.  But both of them work much better than Sorrentino’s versions, largely because Fellini has positioned his films to appeal to a broader audience.  All four movies are strange, but, at least with the Fellini movies, a non-Italian has a chance at making sense of them!

Sorrentino is not only telling a very personal story, but he is also telling it in a style similar to Fellini’s.  Scenes end without any real closure; settings are surrealistic leading to questions of relevancy; and characters are strangely alien.  As Simon Abrams (RogerEbert.com) put it, his “characters are defined by their solitude and their longing; they’re beautiful, but also tacky, and often unsympathetic, beyond little moments of unguarded intimacy.”  Fabietto’s relatives “are, despite their more ennobling moments, too stubborn or dim to be more than happy rubes.”

It is my understanding that Sorrentino never films a scene twice, relying on his actors to get everything right the first time.  He also never reviews dailies and so he never learns what might have worked and what didn’t.  That can lead to uneven filmmaking.  James Berardinelli (ReelViews) writes “The meandering nature of the screenplay causes the movie to seem overlong as it noticeably loses momentum following a key coming-of-age moment…And by the time it ends, The Hand of God is floundering.”  For reasons that remain unclear to me, A.O. Scott (New York Times) gave this film a Critics Pick.  Approvingly, he writes  “…Sorrentino refuses to treat anything as ordinary.  His compositions are lush, sensual and strange.” But then Scott adds “At times it can seem like too much.  At times, it is too much!”

Fellini himself said – and is quoted in this movie – that films are useless except as a “distraction from reality” and is something we need because “reality is lousy.”  Sorrentino adds to that: “films are made by and attended by people who are very much uneasy with themselves, and with life.”  So, for these Italians, films are by and for, people who are distant from the real world. I agree with those basic sentiments – movies are avenues of escape.  But they can also be paths to enlightenment.  There is, I think, a difference between a sensibility of disaffection and longing and one of rejection and chaos.  In the former you find an impulse towards creativity; in the latter you just end up with a god-damn mess.

I’m not sure why Italy chose to present this film to the Academy for consideration by an American audience, but, frankly, it is quite likely, the worst of this year’s crop of Oscar-nominated movies.  (1*). You’ve been warned!

Stream on Netflix Only! 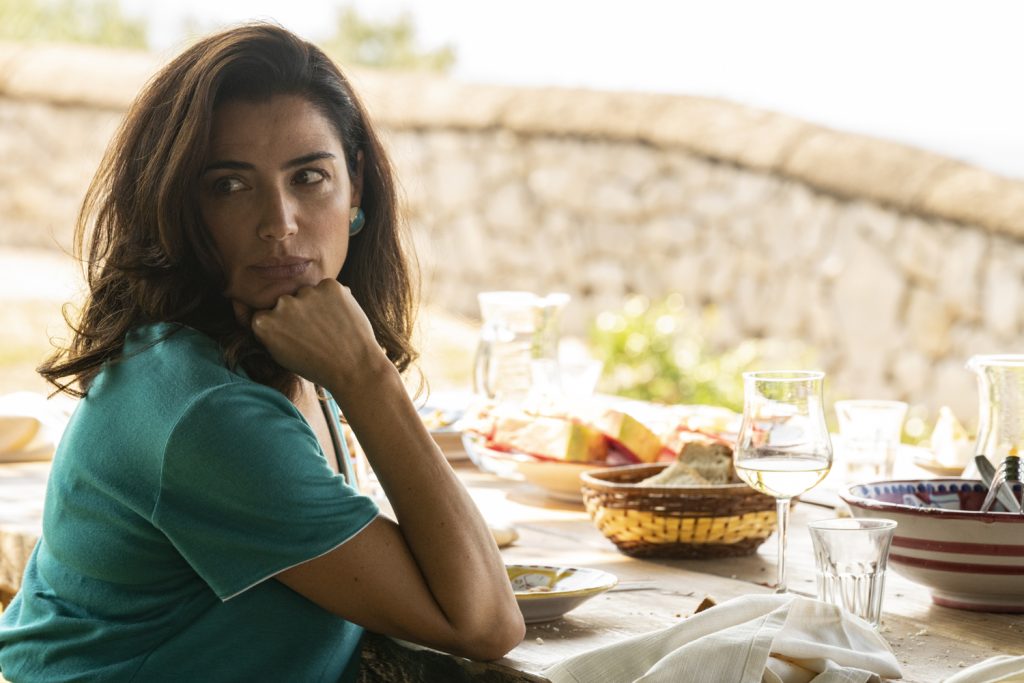 1 thought on “The Hand of God”