(2.5*) Free Guy - Some good acting can’t quite save this fairly shallow movie. 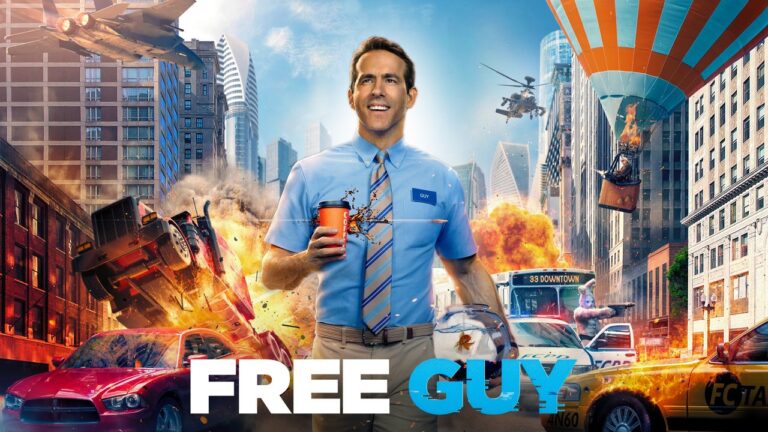 Free Guy is a story about a non-playing character (NPC) in a computer game who develops far beyond his original programming!  The premise is intriguing, but the film is only superficially fun.

The morning before I watched this film, I read a story in the New York Times (“The Brilliance and Weirdness of ChatGPT”, Kevin Rose, 12/5/22) which, quite likely, set the stage for my dismissive opinion of this movie.  In the article, Rose illustrates the potential displayed by a recent release of an Artificial Intelligence (AI) program which is available on a web site for anyone to talk to.  (As of this morning, the website is down because they can’t handle the traffic and are upgrading their servers, but it should be back up fairly soon). The program is designed to reply with completely accurate and full sentences to any text-based request that you might give it.  For example, one inquirer (Thomas H. Ptacek) asked the Chatbot to “Write a biblical verse in the style of the King James Bible explaining how to remove a peanut butter sandwich from a VCR.”  The AI program quickly replied with a fully-composed set of paragraphs which you really should read.  But, to tease you a bit, here is the first sentence: “And it came to pass that a man was troubled by a peanut butter sandwich, for it had been placed within his VCR, and he knew not how to remove it.”  As you read this remember that a computer program wrote these paragraphs all by itself…

Artificial Intelligence (AI) software has been doing some pretty outrageous things in recent years.  They can drive cars, make medical diagnoses, create art, and have pretty much mastered the skills of translating any language into another one.  Many of these advances are based on a technology called “deep learning” where relatively simple software is fed mountains of data and, after quite a few computer cycles, digests patterns in the data and is then able to use those patterns to solve specific problems.  The software wasn’t programmed to solve those problems, it was programmed to learn and, well, the rest just sort of happened.

Although all of that can be exciting to think about, something that isn’t talked about enough is that the computer scientists don’t know exactly what it is doing – they construct neural networks, patterned on how they think our own brain works, and then these neural networks seem to operate on their own, sometimes producing surprising results.  If neural network technology isn’t scary enough, then consider that we are also beginning to build quantum computers which I don’t profess to understand well, but instead of working with zeros and ones, true or false, they are fundamentally based on something having a range of values with only probabilities of being somewhere on the scale between true and false.  Quantum computers promise a radically different kind of computer power that will, potentially, come even closer to, or exceed, human intelligence.

There are debates about just what to make of AI technology, but even those who minimize the risks admit that we have no idea what this is going to look like in the long run.  Stephen Hawking, Alan Turing, and Elon Musk have all suggested that AI poses a definite risk to not just human health, but survival.  One of the near term effects that we are definitely not ready for is the elimination of most, if not all, jobs.  Work can be handled more efficiently by robots programmed with artificial intelligence.  Even our most technical jobs will, maybe not too long in the future, be taken over by machines of some kind.  What does an economy and a social system look like when it isn’t necessary for anyone to work?  What will people do with their time and what goals will we establish for ourselves?  These are profound questions that we haven’t even started to address.

But they may not be the biggest questions.  In Free Guy an NPC (his name is “Guy” and he’s played by Ryan Reynolds) has a kernel of an AI program living in his code somewhere that in very real ways, brings him to life.  He starts to do things he wasn’t originally programmed to do and that disrupts the game big time.  Guy can’t leave the game world – he is, after all, only an organized set of zeros and ones.  But real people can enter the game – that’s why it was invented.  So one real person (Millie, played by Jodie Comer) is known in the game world as Molotov Girl and is a bad-ass character, with lots of “levels”.

There are a lot of complicated reasons but Molotov Girl becomes involved with Guy in the game world.   And Guy is able to help Molotov Girl/Millie out in the real world by what he is able to do for her in the game world.  Meanwhile they share Mariah Carey songs, bubble-gum ice cream, and swings.  And yes, they even kiss – in the game world – a real-person Avatar kisses a non-playing character who is nothing more than a digital object.  In perhaps the most interesting issue that the movie raises, just what does it mean to have a relationship with a program?

Actually, that exact question was addressed in another movie, Her, released nine years ago. And Joaquin Phoenix and Scarlett Johansson explore that problem much deeper than Free Guy can even pretend to go.  As much as I enjoyed the tease in the relationship between Millie and Guy, I couldn’t help but think that all of this had been done before and better.  Free Guy reminds me of so many other, better, movies.  The Matrix series, for example, probes many of the issues involved in living in a simulation.  The Truman Show explores what it might be like to grow up inside a TV show and never know there was something bigger and and the show develops much stronger emotional bonds between the viewer and the character.   Ground Hog Day portrays a man stuck in a repeating daily cycle, much like Guy’s, but we feel more for the character.  Ready Player One brings the viewer inside a video game where the CGI might be older by a few years, but the tension and the excitement of playing next to computer personalities was palpable and the visual effects were much more intimate.

Yes, Free Guy was nominated for Visual Effects, and the team that created them is well seasoned with substantial prior Oscar recognition.  And the VFX are just fine – there are car chases, motorcycle chases, monsters, imploding buildings, transformer-like characters, and even buildings behaving like those in Inception.  They are as good as any in this year’s crop of films.  They are also largely irrelevant – they are pretty much ignored by the main characters and end up becoming little more than background noise to both the characters and the viewers.  With a VFX budget reportedly as big as that for the Spider-man: No Way Home, the inevitable question is why waste the money?  The story ignored them as much as the characters did.

Disney, the producer of Free Guy, now owns both the Avenger and the Star Wars series and they peppered this movie with meaningless references to both of them.  For you gamers, the movie features lots of esoteric asides to other games (apparently it is based largely on Fortnite) and, to make it even more realistic, or not, it features cameo appearances from several internet-famous gamers, although none of any of that means anything to me.

Let me talk, briefly, about the reasons to see this movie.  First, the story is cute and, if you don’t have anything better to do, it is worth a couple hours.  Secondly, the acting – especially given the limited material they had to work with – is admirable.  Ryan Reynolds, as Guy, just sort of flows through his lines in an almost effortless performance.  Taika Waititi gleefully plays the villain, Antwan, and you can tell that, while he enjoys his performance, he also seems to get tired of the same old, same old character after a while – he’s funny, but frankly, he gets boring.  Admittedly I’m a sucker for the young ladies, but Jodie Comer’s performance here is the only thing really outstanding about the movie.  She essentially plays two entirely opposite characters, Millie – the real-world programmer girl, struggling for recognition in a male-dominated industry – and her game-world alter-ego, Molotov Girl – the fiercely determined gamer success who finds Guy at first interesting and then increasingly familiar.

Despite its strengths, the movie falters on imagination.  (And this is from Disney, no less!). The issues around AI are huge and whether you think they pose an existential threat to humanity or not, they deserve much deeper consideration than Free Guy provides.  Any of the earlier mentioned movies dive into these issues in a much more developed and satisfying manner.  This is an important subject and needs to be treated with more than pablum.  Unless you don’t have much else to do, don’t waste your time.  (2.5*)

Stream on Disney +, HBO Max, Hulu  or rent from multiple sources, or wherever you get your discs!