Shang-Chi and the Legend of the Ten Rings

(3.5*) Shang-Chi and the Legend of the Ten Rings is thrilling and a lot of fun to watch. It also involves a compelling story of family dynamics. 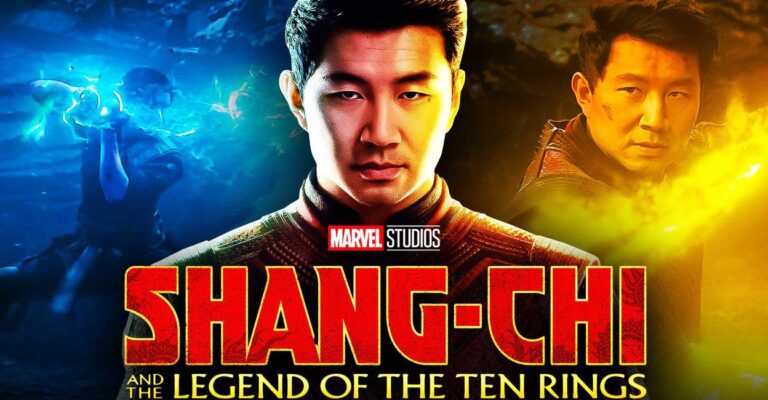 Shang-Chi and the Legend of the Ten Rings is exciting and fun and worth a couple hours’ diversion.  It is the 25th film in the Marvel Cinematic Universe, or MCU, one of, if not the biggest, entertainment enterprises in the world.  While Marvel comics originated, under a different name, in 1939, the Marvel Universe tying things together had its origin  in 1961 when the writers, Stan Lee and Jack Kirby, turned to development of superhero stories that were rooted in the real world.  Spider-Man, The Incredible Hulk and the X-Men were some of their original superheroes.  More sophisticated stories attracted more sophisticated readers. And, over time, the transfer to cinema was inevitable, starting with Iron Man in 2008.  Since then there have been 30 films all sharing story lines, characters, and locations.  The MCU is the highest grossing movie franchise in movie history, garnering more than $28 billion in ticket sales world-wide.

There are web sites, books, wiki’s, blogs, and more sources than you can possibly exhaust if this is something you want to explore in depth – and apparently some people do.  Some of the most arcane references in movies will mean nothing to casual observers, but will trigger a cascade of memories and character relationships in many an MCU fanatic.  There is a sequence in this movie involving an explanation of the term “The Mandarin” that, apparently, goes back to something first mentioned in the original Iron Man film two decades ago.  To most of us, it is a meaningless aside, but to the MCU fanatic it explains some hidden mystery about the relationship between Fu Manchu, The Mandarin, and, well, the father figure in this film.

So, no, I am not the person to explain all of this intricate history.  But, fortunately, this movie doesn’t require all that background to appreciate.  Yes, there are some asides that you don’t quite get, and, if you aren’t into setting the stage for the coming films in the sequence don’t bother to watch the two scenes buried in the long credits – they aren’t necessary to appreciate THIS film.

Shang-Chi is an Asian super-hero character that first appears in the Marvel Universe in 1973.  He is the greatest martial arts practitioner alive and it is interesting that this character appears just after Bruce Lee – a real martial arts legend – died.  Marvel had some ideas of developing a movie around the character, but couldn’t quite shake the idea of doing a non-white superhero until the remarkable, and mostly unanticipated, success of Black Panther (2018).  The fact that a film based on black super-heroes did so well, propelled the producers to speed up production on an Asian incarnation.  And so Shang-Chi and the Legend of the Ten Rings is, what they call in the movie world, an “origin story” describing where the character comes from and how he/she got his powers.

The story in Shang-Chi is full of intriguing characters and is well told with poetic action and well-placed humor.  The story starts in the deep past recounting how Wenwu, – a Genghis Khan-like figure – acquires the ten rings, how they give him eternal life and superpowers.  Then it shifts rapidly to 1996 and how Wenwu (played with control and grace by Tony Chiu-Wai Leung) meets Li, who will become his wife and the mother to their two children, Xialing and Shang-Chi.  (One of the things I enjoyed about this movie is how this backstory keeps getting filled with recurring flashbacks as we move forward in the modern day story.  It is well edited and paced.)

We then fast-forward to modern day San Francisco where we meet Sean (Simu Liu) and his best friend Katy (Awkwafina) who met in high school and now park cars for a living.  Things get exciting pretty quickly when everyone discovers that Sean is actually Shang-Chi and his father now wants him to join him at his remote compound somewhere in Asia.  The fight scene on the bus is one of the best ever and is especially welcome because it presents a new style of fighting between the good and bad guys.  Instead of swinging fists, the Asian martial arts employ much more choreography with brilliant body movements and deft flicks of the hands and legs.  It is rather remarkable how enjoyable this change is to watch.  The fight scenes in Shang-Chi are much more like dancing than they are fighting, and reflect a more subtle and intimate style of combat than we see in something like Avengers: EndGame.  One of the most enjoyable sequences in the movie is when Wenwu and Li first encounter each other.  It starts as a dramatic conflict, but the romantic movements soon change both of them into would-be lovers.  The sequence is, of course, assisted by some good CGI, but the martial arts influence is still terrific and welcome.

And that get us to the visual effects, the only category the movie was nominated in.  Budgeted at $200 million, there are more than 1700 shots with added visual effects.  The four men nominated have four prior Oscar nominations in their resumes and the movie’s credits acknowledge more than 1200 people in the Visual effects team grouped into multiple companies.  So in addition to some spectacular fight scenes, you can also expect, and won’t be disappointed in, some spectacular visual creations.  In Spider-Man: No Way Home, the visual effect I liked the most was when they were in the mirror universe.  In this one, the effects are more intimate and the best ones involve water.  Wherever you might see water, look for some strange behavior and especially when Wenwu places the two pendants in the dragon’s eyes – the results are, in a word, awesome.

In this year’s Spider-Man movie, I was struck by how humanly the story was told, and this one has a similar feel to it.  Yes, Shang-Chi is a super-hero with some pretty amazing talents.  But in order to fully realize his abilities, he must resolve a pretty confusing mash-up of family history.  Perhaps a little too stereotypically, his father presents a pretty heavy Yang to his mother’s Yin.  Part of his confusion his entire life is in resolving these sentiments.  He is finally able to do it, in part by a deadly confrontation with his Father and in part by a wonderful coaching session from his Aunt- Michelle Yeoh – who retains all of her sister’s Yin.  But as he learns, Yin does not mean weak – it represents a different, and in the end, perhaps a more effective way to deploy power.

While the family dynamics were well developed between Shang-Chi and his mother and father, I felt the missing piece in the whole family puzzle was his sister Xialing.  But then, this is what the MCU is famous for – dangle a puzzle in front of you, leave you hanging, perhaps for years, and then present the resolution in a movie ten or twelve films down the line.  So the underdevelopment and ambiguity is probably intentional!

Shang-Chi and the Legend of the Ten Rings is a lot of fun.  It will probably satisfy the diehard MCU fans as well as the newbies.  Enjoy the family dynamic on the inside and the great spectacle outside.  (3.5*)

Stream on Disney + or rent from multiple sources, or wherever you get your discs! 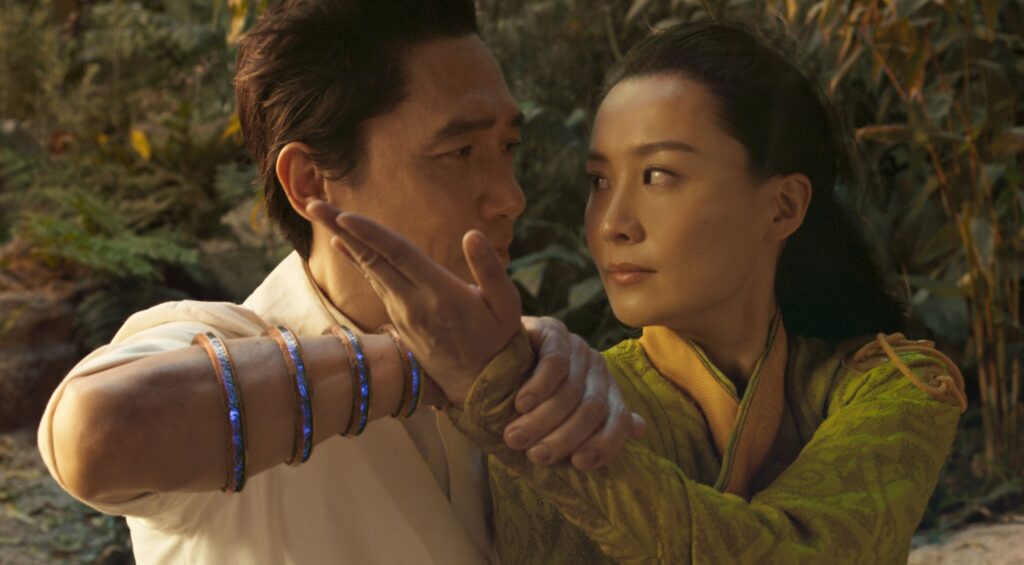