(4.5 Stars) Best Picture Winner and a compelling tale of two men, unlikely partners in a road-trip through the Deep South. One of the better movies of the year. 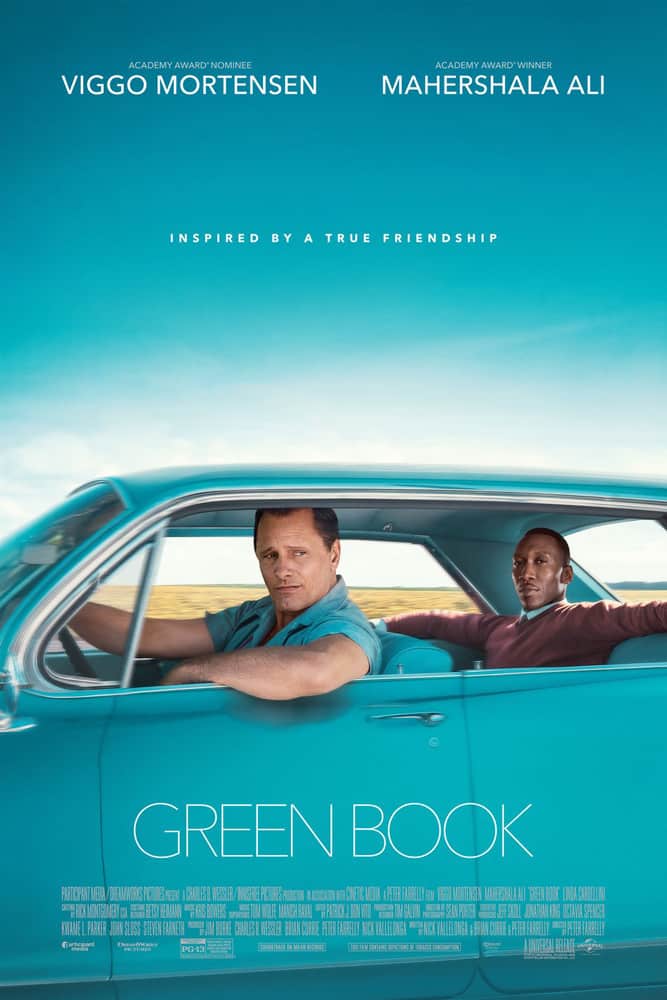 I had never heard of either Dr. Don Shirley, or Tony (Lip) Vallelonga, but apparently both of them are real people who knew each other and actually did take a sort of road trip together through the Deep South in 1962. Of course, what you probably don’t know, unless you’ve heard of this movie or are aware of this history, is that one of them is white and the other black. The story of their unlikely relationship comes together in this movie, as critic Andrew Urban summarizes “…showing two imperfect people grappling with a flawed world.”
In both style and impact, Green Book reminds me very much of Melissa McCarthy’s Can You Ever Forgive Me? – another Oscar-nominated movie from this year. I liked both of them very much and yet, other professional critics have found high merit in McCarthy’s venture while condemning Green Book as guilty of entertaining a simplistic racial message. Both movies were nominated for their scripts and both movies received two acting nominations. Christy Lemire of RogerEbert.com calls GreenBook “Glossy and zippy, gliding along the surface of deeply emotional, complex issues while dipping into them just enough to give us a taste of some actual substance.” A.O. Scott (of the New York Times) called Green Book “a sentimental tale of prejudices overcome and common humanity affirmed” and liked the tale “…even if the trip itself might cause some queasiness.”

Clearly, this movie – this year’s winner of the Best Picture Oscar – is not without its detractors. That was evident in the derogatory comparisons with Driving Miss Daisy and the obvious chagrin on the face of Spike Lee, and his subsequent walk out of the auditorium, when Green Book’s Best Picture award was announced. His protest was not just sour grapes because his own picture, BlackKklansman, had lost. But also because he felt that the picture of America’s racial injustice was overly simplified and ‘whitewashed’ in the Green Book picture, especially as compared to his own portrayal.

You know what? He’s absolutely correct. And yet, I can also say, with total conviction, that Green Book still deserves the Best Picture award. To explain my thinking, we have to look a bit more at the cinematic roots of the Green Book experience.

Green Book is largely the brainchild of two people, Nick Vallelonga and Peter Farrelly who (along with Brian Hayes Currie) were nominated for, and won, the Original Screenplay Oscar. Nick Vallelonga is mostly known for playing small parts in various movies (a cop in Coyote Ugly) and a continuing role in The Sopranos, but is also the real-life son of Tony Vallelonga, the main (white) character who is at least half of the main storyline in this movie. Apparently he has been pitching his father’s story as a possible movie for quite some time.

But the movie idea didn’t take off until Vallelonga paired up with Peter Farrelly who is half of the, somewhat notorious, Farrelly brothers. I had to look them up, and they are responsible for giving us such elevating movie ‘masterpieces’ as Dumb and Dumber, the Three Stooges, and Hall Pass. But they were also responsible for There’s Something About Mary, which, in my view, was one of the best comedies ever. And the thing about a successful comedy is that not only are the lines full of wit and intelligence, but there also has to be a perfect sense of timing in the delivery – its not just what is said, but exactly when it is said after a preciously pregnant pause. 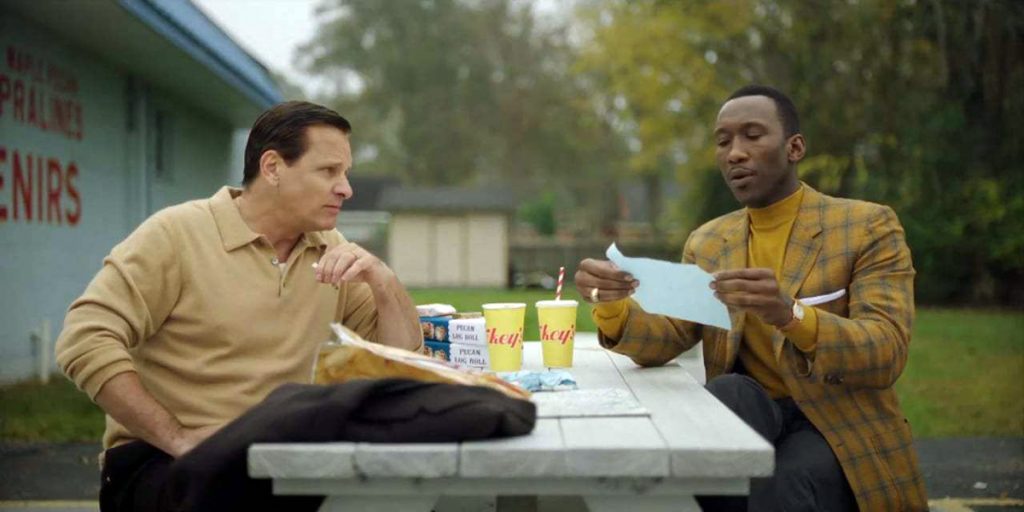 That same sense of timing is evident in Green Book. When Tony is in the Orange Bird bar, the bartender asks ‘You a cop?’ And without missing a beat, Tony replies ‘Do I look Irish?’ It isn’t just the line that is funny, but the immediacy that adds a certainty in its meaning. Part of what makes Green Book work is the comedic sensibilities that Farrelly brings in both his scripting and his direction. (As the scene where Tony folds and eats an entire pizza shows, Farrelly also brings in his preoccupations with food.) At this point, I’ve seen three of the five nominees for original screenplay and although all of them are good, I agree that this is the best.
Green Book is, ultimately, about the relationship between two totally different men. So, much of the credit for the movie’s success must be ascribed to the performances of the two actors, both of whom were nominated for their work.

Mahershala Ali plays Dr. Don Shirley, a black concert pianist – a description that should immediately cue both the dramatic and comedic possibilities. He was previously nominated for his supporting role in the 2017 Best Picture winner, Moonlight. Here he must convey both the technical and expressive skills of a master musician, but also the courage of a black man who, in 1962, dares to confront the prejudices of the Deep South. His experiences on his tour are, as to be expected, gut-wrenching and miserable. But he is also harbors some pretty intense identity secrets which starkly emerge one night when Tony must save him from an embarrassing situation. Classical Music is not a black man’s expected world, and he well knows his predicament: “So if I’m not ‘black’ enough and if I’m not ‘white’ enough, then tell me, Tony, what am I?” Ali won Best Supporting Actor.

Although it is hard to rank them, perhaps the better performance was from Vigo Mortensen, who played Tony Vallelonga, the Italian bar-bouncer who hires on to drive Dr. Shirley through his southern tour. Mostly, Tony hasn’t the faintest idea what he is getting into. But, over time, Tony changes the most, all in very positive ways. He even learns, with Dr. Shirley’s help, how to write letters to his terrific wife, whom he loves very much. This is Mortensen’s third Oscar nomination, (Captain Fantastic and Eastern Promises before) although he has never won. (He is probably best known for his heart-throb role as Aragorn in the Lord of the Rings trilogy.) In Green Book, he is the heart and soul of the movie and it is how we see him change that gives us the ‘hope’ that the movie inspires.

So maybe their relationship is a little simplistic and maybe it is a ‘feel-good’ resolution to the intractable problems of racial injustice. I suspect it is true that the writers understood the Bronx Italian a little better than the black concert pianist (and that surprises whom?)

Still, this is an excellent movie. As MaryAnn Johansson, of Flick Filosopher, writes “what snatches the film from condescending awfulness is the wit and the charm and the complexity with which both Don and Tony are drawn, and the absolutely gorgeous performances by its stars.” For that it deserves 4.5 stars.