(2.5 Stars) A visually beautiful period piece, but perhaps a bit more story than the director and writer could handle. 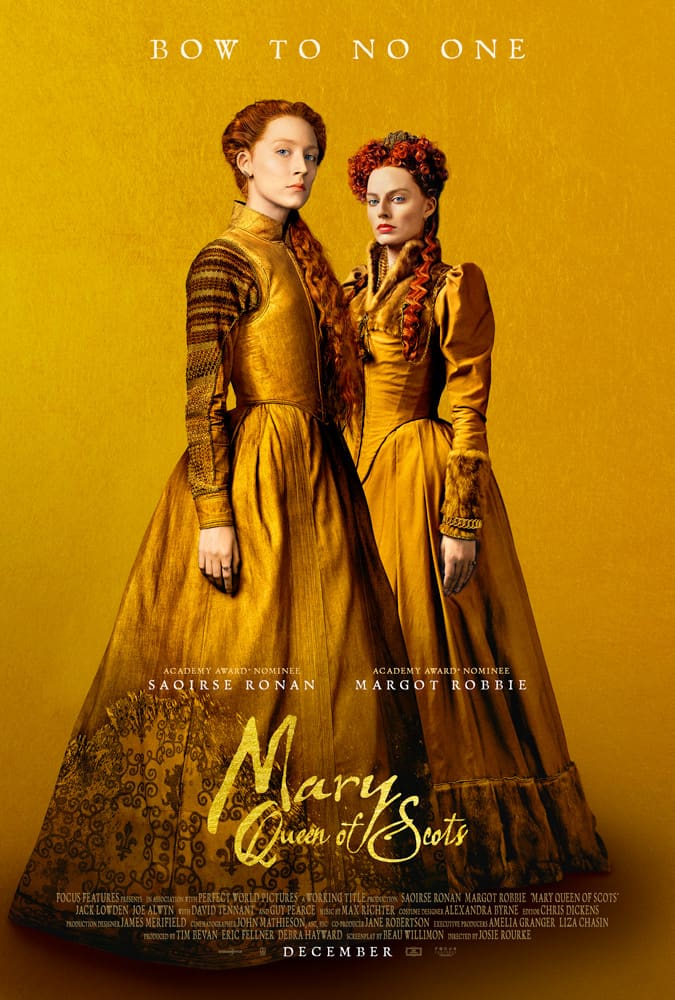 I suppose there must be one movie that ends up at the bottom of the rankings and, unhappily, this year it is this one, Mary Queen of Scots. Audiences gave this a 6.5 (out of ten), the lowest of all 37 movies nominated for Oscars this year. Critics didn’t do much better, giving this a 60 Metascore, and placing it next to the last in their rankings. What is especially damning is that both the audiences and the critics are in agreement – this simply isn’t a very good movie. I am going to join in all the negativity and also give this my lowest rating so far, of just 2.5 stars. (According to IMDB, the movie has not yet earned back its production budget!)

It has some redeeming features, and I will speak about them first. It received notable recognition, above the thousands of movies released last year, by getting Oscar nominations for Costumes and Makeup & Hairstyling. Now, granted, these two categories are both ‘below-the-line’ and, arguably, these are the least important of all the ‘technical arts’. But positive comments are in order.

The costume design is for Oscar-winning Alexandra Byrne. She has received four other costume nominations and won the Oscar for Elizabeth: The Golden Age. She knows how to decorate Elizabethan era actors having also done Elizabeth, Hamlet, and Finding Neverland. (Recently, she has done the costumes for the Guardians of the Galaxy movies which I thought were more than deserving for an Oscar nod.) The dresses for Mary are elegant and refined, all helping to convey Mary’s claim to the Scottish throne as well as her French background. Even while riding her horse, she looks fine. For Elizabeth, the costumes help portray her stiffness and seem to reinforce how caged she is, insulated from the outside world.

It also achieves outstanding results for Makeup and Hairstyling. Done by a team that included Jenny Shircore, Marc Pilcher, and Jessica Brooks, the results here are very impressive. (Makeup team members have also received nominations for Young Victoria and won the Makeup Oscar for Elizabeth. And they also worked on Guardians of the Galaxy, among many other science fiction and period-piece movies.)I don’t think I’ve seen hair arrangements as stunning and exotic as those for the two queens in this movie. And, while Ronan’s natural beauty is allowed to shine through, Robbies face is adorned with an ugly prosthetic nose, and, halfway-into the movie, small-pox scars, hidden by an awful white makeup that actually succeed in making Robbie unattractive. Hats off to their work here.

I loved Margot Robbie in Wolf of Wall Street, but thought she was miscast in her Oscar-nominated I, Tonya. As Queen Elizabeth, she manages to hold her prominent, prosthetic, nose high, and genuinely enjoys delivering stuffy lines in her contest with Mary. But this is not her movie either.

But I have to extend long kudos to Saoirse Ronan for her excellent performance as the title character. Perhaps it is her innate Irishness that makes her a credible ble Scot (think about that a little), but her freckled complexion, red hair, and lilting accent make her a natural in this role, even more than her wonderful (and Oscar-nominated) appearances in Lady Bird, Brooklyn, and Atonement. This might have been her best performance ever, if only the script had made some sense.

The screenplay is from Beau Willimon (based on a book by John Guy). Although he received an Oscar nomination as a co-writer for Ides of March, his main claim to fame is as a TV writer, notably for the House of Cards. A TV series is a much different medium than a movie, mostly because it isn’t necessary for any given hour to make complete sense. If there are loose ends, they can be tied back together in a future episode. (In the case of House of Cards, there were 73 episodes and plenty of opportunity to make ends meet.). But that isn’t true in a movie where, if you are lucky, you can maintain audience interest for just two hours and so have to explain all the connections tightly and economically. This movie fails in that regard. 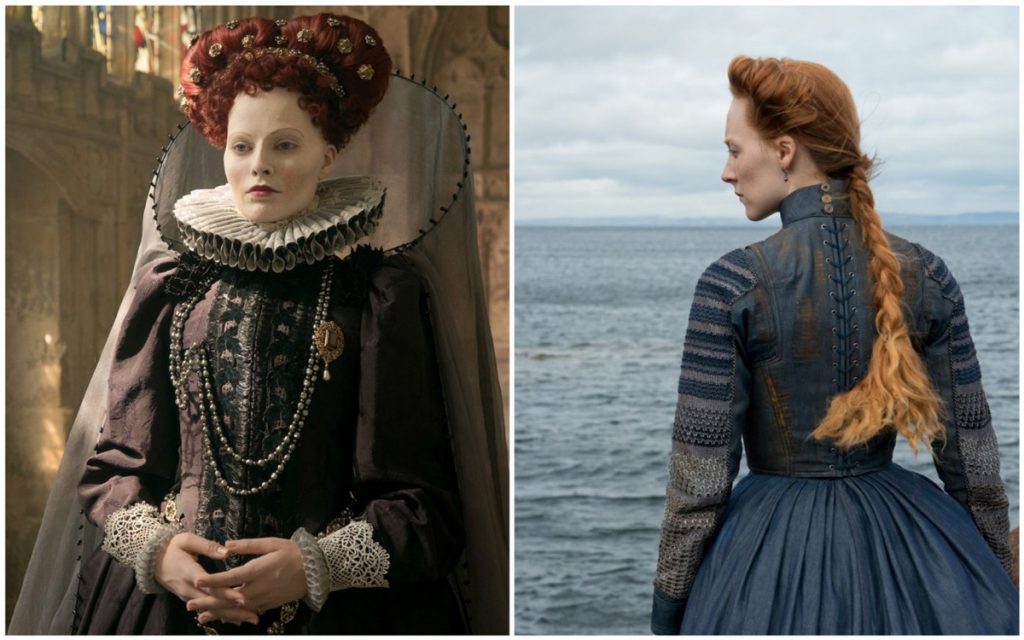 It also doesn’t help that the director, Josie Rourke, was brand new to the job. Originally, the director chair was to go to someone else, so, apparently, it isn’t her fault that she was in over her head. But her creative experience is on the live stage, not the movie studio. Maybe the concept of multiple takes, to get things right, doesn’t occur to her – stage plays don’t allow it. This is her first movie as director and, unfortunately, it shows in the lack of continuity.

The stunning visuals in the appearances of the people in this movie, and especially the two queens, help keep your attention in the first half of the movie. After a brief introduction, indicating Mary’s demise in 1587, we are then transported back twenty-five years to Mary’s arrival in Scotland from France. Things begin to get sticky right from the very beginning. Why was the future Queen of Scotland in France? And why, later in the movie, do we learn that Mary appears to have a stronger claim to the English throne than even its current occupant, Elizabeth? If you are as knowledgeable about European monarchies as I am, then you too will have these questions and concerns. Unfortunately, it doesn’t get any better.

It doesn’t take too long before we understand that this is a movie of, for, and by women. A.O. Scott (New York Times) writes. “Each Queen is, to some degree, a pawn, manipulated by opportunistic courtiers and politicians who proclaim loyalty to the sovereigns they seek to undermine. No man is entirely trustworthy.” And MaryAnn Johnson (the Flick Filosopher) says the movie is “…a must-see feminist parable that resonates for us today: their struggle as women to be heard in a world in which men are willfully deaf to them is shockingly modern.”

This is definitely a feminist movie, but even so, the men are presented as not just petty and mean, but as conniving, and incredibly insecure. The pivotal scene in the movie comes when a bunch of courtyard nobles, too cowardly to confront the queen directly, instead murder one of her favorites, inside her chamber, while she is watching. It is an ugly and vicious scene and, besides showing how miserable the men are, it is also the beginning of Mary’s downfall as she not only was powerless to prevent her courtier’s murder, but, in some sense, was the cause of it.

And so then the movie unravels. I’m not sure quite how many years the last hour embraces, but it seems to be at least a decade and a half. We are led to believe that not only is Mary battling her nobles, but also her brother, the Protestants, led by John Knox, and Queen Elizabeth of England too.

Towards the end of the movie, but some ten years before the end of her life, Mary supposedly visits Queen Elizabeth, making one last gesture to save her throne. (History does not support such a meeting, so this is a conjecture on the part of the writer.). Their meeting, would, of course, be of immense importance and the movie seems to create that importance by waving a closet full of bed linens in the most perplexing scene in the movie. As the two queens seem to dance between dangled sheets, they somehow have this momentous conversation that maybe could have saved Mary, but instead dooms her to a decade of imprisonment, or protection, from Queen Elizabeth.

The movie simply crumbles under its own weight. Tackling complex history is difficult enough, but if the director and writer really don’t understand the medium of movies, then even Ms. Ronan can’t save it. There is much beauty in this movie, but it fails to tell a convincing story.