(2*) House of Gucci is an overly long mess that fails to establish a consistent tone. 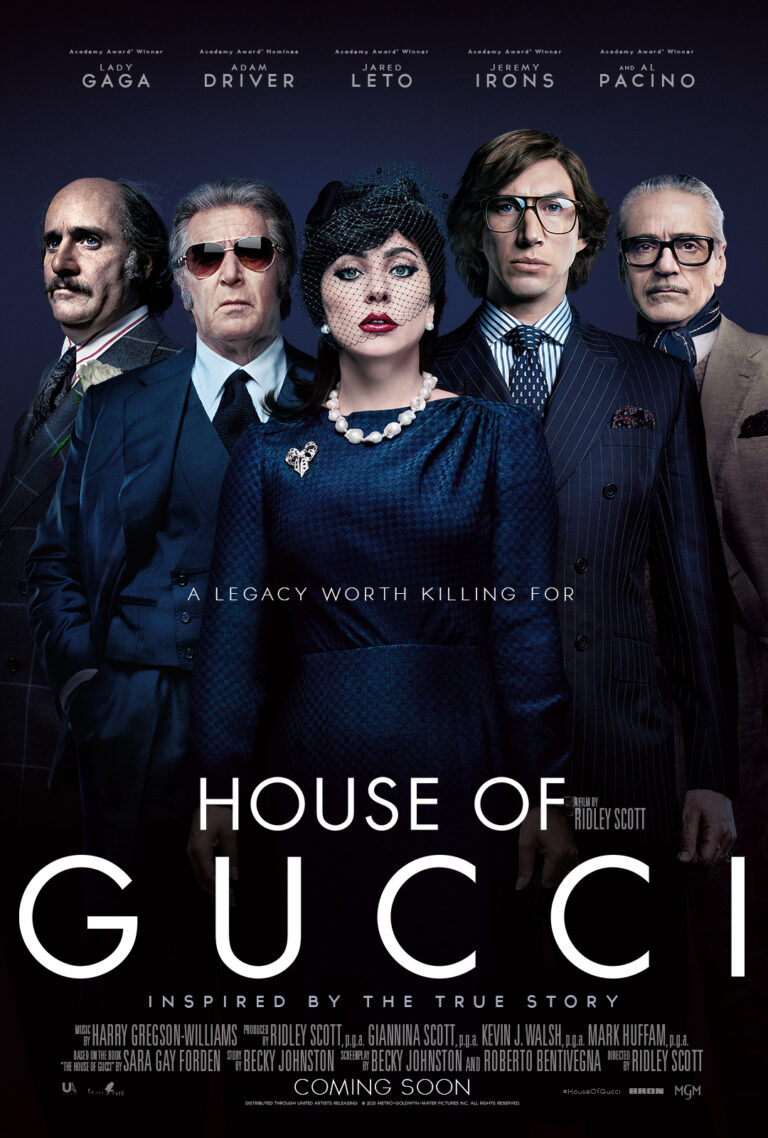 House of Gucci fails as a movie.  It lacks a consistent understanding of what the “tone” should be. The viewer doesn’t know if it is supposed to be a farce, a sexy romance, a romantic comedy, a thriller, or even a riveting drama. In its overlong presentation, the movie scatters its emotional shots and insults its audience by failing to give them the respect of a defined message and story.

What makes a “story” different from an objective, historical recounting of the passage of some event – assuming it is real – is the perspective of the storyteller.  Multiple components go into the storyteller’s perspective, but perhaps the most important is something called “tone”.  Tone is defined as the “general character or attitude of (something)”.  So the tone of a story is the general attitude that the storyteller has to his story – its plot, characters, and setting – and what he hopes the receiver of his story takes away from it.  Tone isn’t something easily defined or labeled, but it is extremely important because it is the emotional foundation on which the story is built.

Tone applies to all kinds of stories – literature, history, poetry, stage productions, television, and, yes, movies.  In fact, I think I would argue that one of the key foundations of any movie is its tone – it even underlies how the movie is classified, its genre.  Historical dramas, for example, attempt, as much as possible, an objective, journalistic tone.  Comedies milk all the humor they can find in the story and try to make the audience laugh.  Romance movies tap into the nearly universal need to be loved.  Thrillers explore our sense of excitement and surprise.  Horror movies challenge our feelings of fear and disgust.  Dramas often engage – in different combinations – our emotions of sadness, hope, and accomplishment.

Tone is a very easy thing to convey if the storyteller has a clear understanding of what their own feelings are to the story.  But if they are ambivalent, or worse, don’t care about their story, then they may relate an inappropriate or inconsistent tone, confusing the audience, reducing the effectiveness of their message, and, ultimately, wasting the time and effort of everyone involved.  Unfortunately, that is the problem with House of Gucci.

In many ways, that was unexpected.  When it was released, a little over 13 months ago, it received plenty of hype and why shouldn’t it?  It involved a story of a world-famous fashion family that had huge amounts of intrigue and crime.  It was directed by Ridley Scott who has been Oscar-nominated for directing such important movies as Thelma & Louise, Gladiator, Black Hawk Down, two of the hugely successful Alien horror/sci-fi movies, the original Blade Runner, and most recently, The Martian, a Best Picture nominee.  He assembled an accomplished team of prosthetic and makeup artists, hair-stylists, production and costume designers, a musical composer, cinematographer, and editor that had either worked with him on The Martian or on his other recent – and well received – movie The Last Duel.  The cast included Oscar nominees Lady Gaga, Adam Driver, Al Pacino, Jeremy Irons, Jared Leto, and Salma Hayek.  In short, House of Gucci was a movie that should have been a great success.

But it wasn’t!  It falls 23rd out of all 28 general interest Oscar movies this year, not well liked by either audiences or critics.  It received only a single Oscar nomination, for Makeup and Hairstyling (which I agree, it probably deserved), but it didn’t win that category.  It probably made a little money for the producers, although it wasn’t the box-office runaway that some expected it to be.

Fundamentally, the problem is that the storytellers failed to set a consistent tone.  And the result is rampant confusion in the audience.  Was it supposed to be a comedy, a farce, a melodrama, or a dramatic telling of a very dysfunctional family?  House of Gucci delivers multiple and inconsistent tones and while that can sometimes work with a well-crafted script and an engaged director, neither applies in this situation.

The script is based on a book (which I haven’t read) by Sara Gay Forden titled “The House of Gucci: A Sensational Story of Murder, Madness, Glamour, and Greed”.  Ms. Forden is a journalist specializing in stories on the great Italian fashion houses like Gucci, Versace, Armani, and Prada, but as far as I can determine she has written only this single book which is probably best described by its title.  The screenplay was based on the book and the credits were shared between Roberto Bentivegna and Becky Johnston.  Bentivegna has a very limited resume of film screenplays.  Johnston is best known for writing screenplays for Best Picture nominee Prince of Tides, as well as Seven Years in Tibet and Under the Cherry Moon, all of which were done 25-35 years ago.  In short, the background for the story is not coming from people who are currently successful in the film industry.

Perhaps, though, the person most responsible for setting the “tone” of a movie is the director, in this case, Ridley Scott.  Scott is no neophyte to telling a story and I have to believe he understands the concept of “tone”.   His first directorial success was very “tone specific”, Alien (1979) and he followed that up with multiple projects all of which were considered incredible movies – with well defined tones – although all were released more than twenty years ago.  He directed a good, but not great, movie released in 2017, All the Money in the World.  Born in 1937, Scott is no spring chicken and it is entirely  possible that with his attention focused on his other film released in 2021, The Last Duel, and the disruptive effects of the pandemic that he simply wasn’t able to give House of Gucci the attention that it deserved.

In a joint interview with the New York Times after House of Gucci was released, Scott and Lady Gaga gushed over each other.  But Lady Gaga admitted that she never finished reading the original book that the story was based on  because she ‘didn’t want to be influenced on how to interpret her character’.  Really?  Perhaps if she had, then her portrayal would have expressed more of Patrizia’s true character and been more convincing.  If Scott didn’t require his cast to read the source material, then it is no wonder that everyone seems to march to his own drummer in this film.  Al Pacino plays Aldo much as he played his role in the Irishman, while Jared Leto gives his character a moronic edge that is borderline farce.  Adam Driver is, perhaps, the best actor in House of Gucci, but that might be simply because he  brings to his role characteristics similar to two of his other recent performances in Marriage Story and BlacKkKlansman.  Even so, there are times in the film where even Driver appears to be lost and looking for direction.

One very important question is why the movie isn’t done mostly in Italian?  It is very disconcerting to be listening to the Gucci family emoting in thickly-accented English when we know that they would have spoken their native tongue, especially at family gatherings in their homes, in Tuscany, Italy.  The decision to voice the film in accented English is probably the first mistake the creative team made.

But it wasn’t their only one.  The deep dive into the lives of the rich and famous is fun in its surface appeal – the clothing, the hairstyles, the architecture of their villas and New York penthouses.  But they couldn’t even get the songs in the soundtrack to reflect the proper decade.  In the end, House of Gucci fails and takes way too long to do so – and that is insulting to the viewer.  (2*)

Stream on Prime, EPIX, Paramount+, Sling, Philo, or YouTube or rent from multiple sources, or wherever you get your discs!