Some of the most interesting movies to watch and then write about are those where the audience and the critics disagree about the film’s merits.  Generally, that doesn’t happen – critical assessment usually aligns with audience reaction.  However when there is a strong difference of opinion between the audience and the professional critics, then there is something to pay attention to.

The Avengers movie this year, for example, was an overwhelming hit with the movie-going public as they bought almost Three Billion Dollars worth of tickets worldwide, while the critics placed it in the middle of this year’s rankings.  Critics, myself included, tended to find fun in the visual effects and the entertaining story, but, as in most comic-book movies, criticized the movie for not addressing deeper human dilemmas and emotions.  Even the critics, though, agreed that the Avengers was a fun movie to watch.

Not so, with the Joker!  This is a movie where the opinion difference between critics and general audiences is the largest gap in the last several years of my movie tracking.  Joker placed fourth – in this year’s ranking (tied with the Avengers movie) by IMDB users as audiences sent the worldwide box office to well over $1 billion.  That box office gross is the largest amount for an R-rated movie ever in movie history.  Meanwhile, the critics placed this movie thirty-third (out of 38), barely ranking it above the warmed-over Lion King and the Maleficent fractured fairy tale.  This difference reflects two very different understandings of this movie.  I want to address that issue in this review and will come back to it.

First, though, let’s talk about the movie’s Oscar record.  The movie received eleven nominations scattered across all kinds of categories – the most nominations of any movie this year.  Not only nominated for Best Picture, it also received nominations in the directing, writing, and acting categories.  I call those ‘above-the-line’ categories because they are those most important in assessing the quality of the story-telling.  Only three films received more above-the-line nominations than Joker with just five (Irishman, Marriage Story, and Once Upon a Time in Hollywood).  Additionally, Joker scored seven ‘below-the-line’ nominations reflecting an accomplishment in all the various crafts that go into making a movie, like sound, costumes, cinematography and editing.  This kind of nomination pattern is unusual and suggests a well-balanced and highly crafted film.  Not counting this year’s nominations, the actors, artists and craftsman behind this movie have a total of at least 31 Oscar nominations and at least five Oscar wins to their credit.

Out of the eleven nominations, Joker took home two Oscars.  Hildur Guonadottir, a composer from Iceland, took home the Oscar for Original Score.  She worked on the films Arrival and Sicario, both of which had amazing music.  I still find the music from Sicario haunting and fraught with tension.  In an interesting twist, Guonadottir composed the Joker score before seeing the movie.  She worked with Director Todd Phillips to determine the kind of mood he wanted to set, and she put together the score based only on that understanding.  If you listen to the soundtrack independently of the film, as I have been doing for the last couple of months, you find the music grating and disturbing.  Once you see how it sounds with the movie itself, you understand why she won the Oscar.

The other Oscar went to Joaquin Phoenix for his performance as the Joker, or, as the movie starts, Arthur Fleck.  Phoenix is known as a temperamental sort and one who eagerly takes on the roles of weird or disaffected people, or people in very strange circumstances.  I loved his performance in Her (2013), where he fell in love with a computer, and he has been nominated for acting Oscars three times in the past for Walk the Line, Gladiator, and The Master.

Even most of the critics agreed that Phoenix’s performance in this film deserved the nomination if not the Oscar.  To play this role he lost 52 pounds – and he’s not exactly a big man in the first place.  He reported that with his weight loss, his body was able to move in ways he had never experienced before.  That kind of movement ability leads to expressions in the movie that are surrealistically effective.  It is also reported that, because Phoenix was so physically exhausted most of the time, most scenes were limited to just a couple of takes, requiring a level of performance that only a motivated actor can aspire to.  Apparently he left the set many times in the middle of filming because he was so disappointed in his own performance.

The result, though, is mesmerizing.  Phoenix draws you into the depths of Arthur’s soul and it is a very uncomfortable place to be.  He has a difficult past and we pick up the pieces of his puzzle, much like  Arthur/Joker is himself trying desperately to make ‘cents’ out of his shattered past.  He is a loner of the highest degree and makes a miserable living as a clown on the streets and back alleys of New York City in the early 1980s.  His contact with the human world is narrow and, as it closes in on him, becomes even more constricted.  His one outlet seems to be to dance, by himself, and to music that only he can hear.  Phoenix also dug deep to uncover a laugh that can only be described as ‘painful’.  I’ve only seen one other Leading Actor performance from this year (Antonio Banderas in Pain and Glory), but it is hard to imagine that anyone earned the acting Oscar more than Phoenix.

So if everyone agrees that Phoenix turned in a tour-de-force performance, and the movie was so well crafted in departments across the board, then why do they despise the movie?  To answer that question I read nearly a dozen critical reviews ranging from the New York Times, the Washington Post, San Francisco Examiner,  to ReelViews, Sight&Sound, and the Flick Filosopher.  I will try to digest all of their comments and add some of my own thoughts.

Some critics didn’t have many good things to say about Todd Phillips, the director and co-writer.  Admittedly, he doesn’t have a huge nor seemingly important filmography to back up an undertaking this large.  He was nominated for his Screenplay for ‘Borat:…”.  He is also responsible for the sophomoric and raunchy Hangover movies, as well as Due Date and Old School.  When I learned this was his background, I was surprised that he could put together such a dark and forbidding drama as Joker.  But I have also learned that sometimes the comedic sense of timing can be used effectively in dramatic modes.

Another set of complaints comes from the fact that this is, on the surface anyway, a ‘comic-book-movie’.  Yes, it is a stand-alone origin story for the Joker, one of Batman’s ongoing villains.  But if you go to this movie expecting a typical comic-book flick, like the Avengers, you will be sorely disappointed.  Even compared to Nolan’s Dark Knight, Joker is a much deeper exploration of alienation and despair.  If a critic wants to complain about yet another fantasy-action movie, full of special effects, he won’t be able to find those things here – it doesn’t fit that mold.

Many liberals, of course, will object to the violence – and it is present here.  Although I definitely count myself as a liberal, I recognize that we live in a violent world.  Human history is told with wars, cruelty, and crime.  I don’t believe it is possible to avoid these behaviors in our movie world, just as we can’t dismiss them from our past.  Movies should not glorify violence, and Joker does not do that.  The acts shown here are completely relevant to the story and are, I think, necessary to understanding the Joker’s character.  So dismissing the movie because of its R rating, is neither fair, nor accurate.

Many took fault with Phillips’ quoting previous Martin Scorsese films, like Taxi Driver, or the King of Comedy.  While there is nothing wrong with referencing other movies, their objection was that The Joker doesn’t add anything new to the conversation, and is superficial in its treatment of the themes of class and racial divides.  (It is interesting that many of the people representing social institutions, which don’t exactly treat Arthur very well, are black.)

There might be an element of truth to that, but I think this line of criticism only begins to address the major fault lines of the movie.  Several, liberal-minded critics objected to the movie’s depiction of the white male as the victim of society, arguing that the movie overemphasized his social misfortunes while ignoring the normal, liberal model of ‘victim’, like ethnic and racial minorities and women – how dare Phillips suggest that white males are oppressed.

And yet, isn’t it exactly the frustrations that Arthur Fleck endures that are at the heart of the white male rebellion that is fueling right wing politics?  Perhaps the educated white liberal class is too busy championing women and the oppressed minorities that they are completely misunderstanding a major segment of society – all those people wearing MAGA hats?  Maybe us white liberals aren’t paying enough attention to how social institutions are screwing over those people who look like us but are less fortunate.

I watched Joker a week ago just after the country began the coronavirus collapse.  I must say that the movie took on a extra-chilling effect because of the apocalyptic similarity with reality.  Honestly, for two straight hours, I couldn’t disengage from the TV as I witnessed, on television, the collapse of society that was alarmingly aligned with what is happening on the other side of the front door.  Movies are not supposed to always make you feel good.  Sometimes a good movie has exactly the opposite effect.

I think the reason the critics panned this movie and found it ‘shallow’ is for the reason that that same class of people fail to understand what fuels the Trump movement.  We don’t get it because, for us, the system is basically working, and we don’t understand why they are complaining so much that they support the con artist Trump.  We fail to see how serious the class disruptions are and how America’s working class (many, maybe most, of them white males), are being seriously left out of America’s dream.  Trump gains their support because he convinces them that he is looking out for their best interests – it doesn’t matter whether he is really doing that or not.  Liberals aren’t demonstrating that kind of concern.

Perhaps it takes the collapse of the entire system, as we seem to be witnessing, for people to step back and take a really good look at what’s going on.  I encourage you, if you can, to watch Joker – it isn’t a pleasant experience, but it is one that perhaps we all need to have.  When you finish the movie, look around you and ask a simple question:  “Are Trumpers and the Joker the same thing?” (4.5 – Maybe even 5 – Stars) 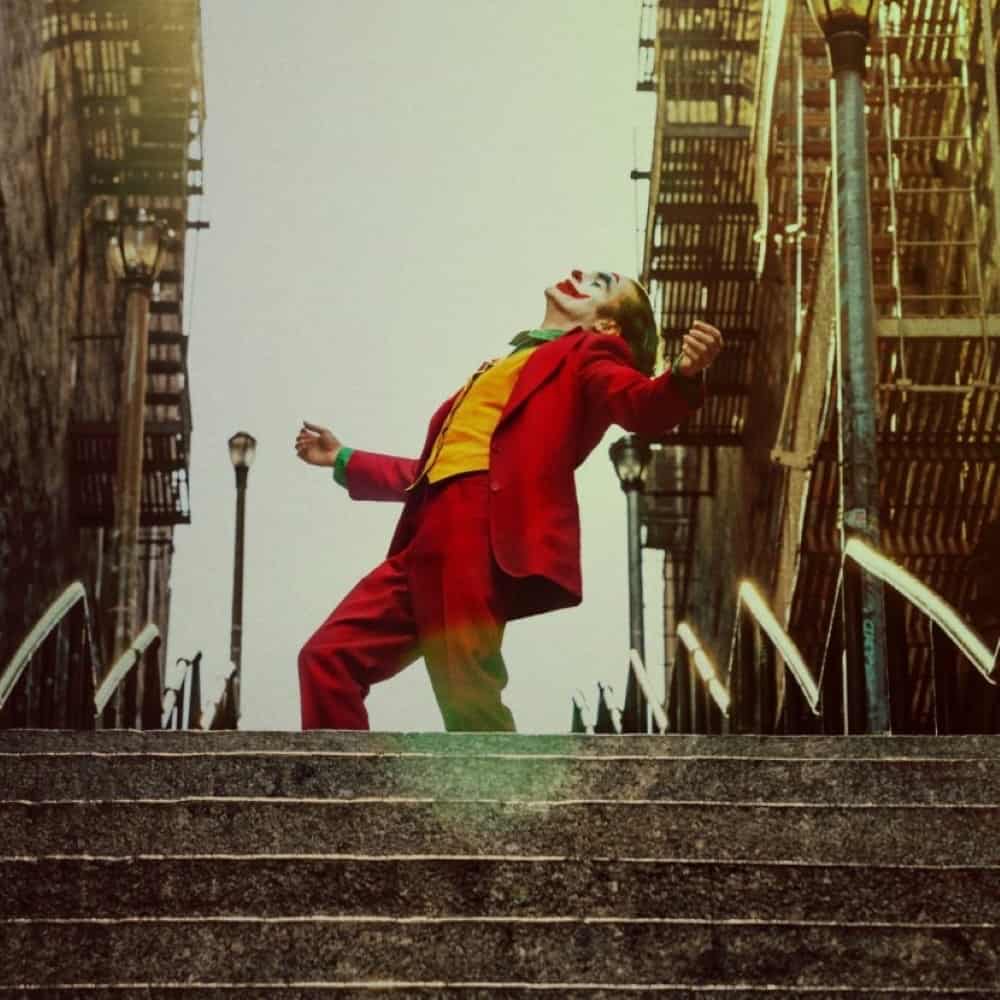