(3.5 Stars) A delightful family story with a terrific combination of animation styles. 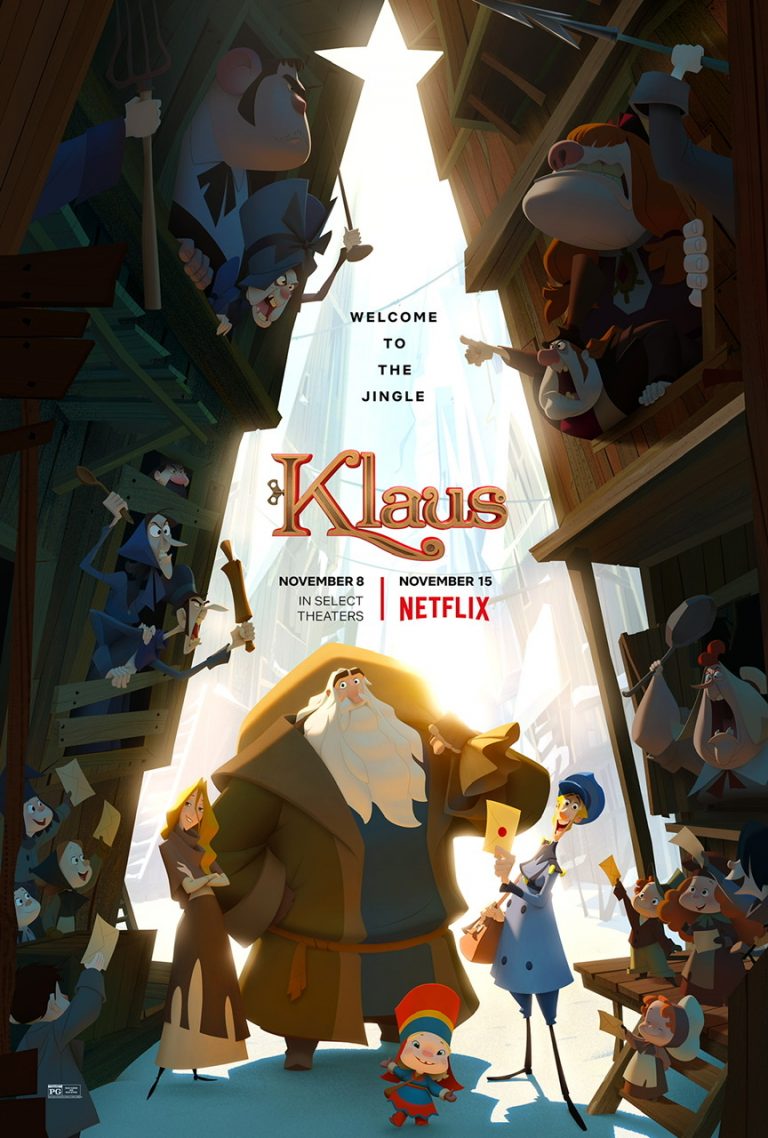 I love it when a movie surprises me – it means that, despite my prejudices I can still manage to see something new and different from what I expected.  Such was the case with this movie – Klaus.  My initial estimation was that this was going to be another so-so animated Christmas flick, geared to keeping the kids somewhat entertained on a Saturday afternoon while the parents did something else, possibly related to shopping for the big holiday.  Certainly the critical rating – in the bottom quarter of the 38 Oscar movies this year – suggested that, despite modestly good audience reaction, there really wasn’t much going for this movie.

But I can report that, once again, the critics are pretty much wrong.  While this isn’t a perfect movie, it is certainly worth watching and even despite the Christmas theme, I found it enjoyable, and worthy of a family afternoon, even in early February!  I probably should have known that it had something going for it, I mean it DID get an Oscar nomination. (Then again, the Academy has been known to do some strange things…)

The movie had a tough time getting made.  It is the brain child of Sergio Pablos, the lead director, writer, and animator.  He was originally with Disney studios and wrote the story for Despicable Me.  He left Disney and spun off his own company based in Spain and the United Kingdom.  He had difficulty funding this movie but was finally able to convince Netflix to pony up the $40 million necessary, which is truly a modest amount compared to at least three of the other nominees in this Oscar category.  (This is Netflix’s first animated film venture.)

There are two things that make this movie worth a screening – the unique animation technique, and the simple but appealing story.

I can only describe the animation style as a fusion of the best aspects of computer-generated-imagery (CGI), and the old-style, hand-drawn animation. The characters all seem to have the warmth of an older 2-dimensional cartoon.  The character movement is choppier and lacking the seamless fluidity that computers provide.  So the characters feel more relatable, like an old Disney classic.

But, at the same time, the environments they populate are incredibly rich in detail, saturated with different shades of shadow and light that end up conveying a distinct sense of three dimensions.  Smeerensberg, the chilling arctic town where the story unfolds, is, early in the movie, a cold and threatening environment where unhappiness populates every shadow.  As the story warms, so do the colors and the light of the town – as if the place emerges from winter darkness – the shadows recede and the rich textures of the town begin to pop.  These are the kinds of things that computers excel at, and here, in Smeerensberg, they are on full display. This contrast between the CGI environment and the more personal, hand drawn characters helps bring out the best qualities of both styles and, in service to the story, create an intriguing and enjoyable experience.

But don’t forget the story.  As you can infer from the movie’s title, this is an origin story for that very important figure that dominates one of the most important holidays of the year.  If you ever gave any thought to questions like – why does Santa Claus deliver toys to boys and girls?  Why does he come down the chimney?  Why does he use a sleigh?  With reindeer?  That fly?  Well, ALL of these questions and many more are answered in this story.  (I really don’t think it matters that the answers are historically inaccurate – I mean, after all, this is a story about a story, so I think rules of truth and logic can be suspended a bit.)

If that’s where the story stopped, it would be an intriguing flick and we would all leave it with a satisfactory smirk on our face.  But the explanation of the Christmas mythology goes beyond just the mechanics of how it happens.  It also touches on the Why.  What is the greater purpose of giving gifts?  The story follows Jesper (Jason Schwartzman) as he learns some serious life lessons and matures from a spoiled, self-centered, brat into a responsible, feeling adult who even finds romance with school-teacher Alva (Rashida Jones).  His life-changing year is pushed along as he helps, and is helped by, the recluse Klaus (J.K. Simmons) himself.  You leave the movie with more than a smirk and maybe even a tear or two and an acknowledgement of the central Christmas spirit that ‘A True selfless act always sparks another.’

No, this isn’t a perfect movie.  But I think it deserves more kudos than the critics want to give it.  It is beautiful to look at and touches the heart.  All movies should do as much.  (3.5 stars)