(2.5 Stars) Has some terrific stop-motion animation scenes with rich backgrounds. Story-line a little weak, but a good family movie. 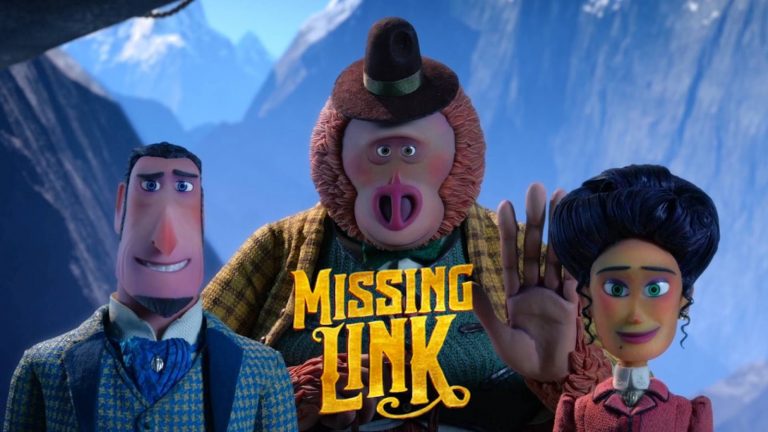 There are several different ways to make an animated film.  Today, most of the better known animated movies are done with computers, resulting in lushly detailed imagery, especially when quantity of characters, or images, are required.  Of course, many of the simpler examples are still done with hand-drawn imagery which reflects the skilled artistic hands, and imaginations, of the artists.  I Lost My Body, last week’s film, was hand drawn and that was a strong part of its appeal.  So are many of the Japanese anime films, which have defined their own niche with fans of the genre.

There is a third form, stop-motion, which is a tedious and difficult way to film a movie, but produces extremely interesting effects.  In stop-motion, the characters aren’t drawings, but rather real three-dimensional models which are manipulated by the artists to simulate motion.  So the artist places their figures in a set, snaps a frame, then moves the figures’ arms or legs or mouths ever so slightly, and snaps another frame.  This process goes on for thousands of frames, the combination producing the simulation of movement.  As you can imagine, it takes a great deal of patience and time to make such a movie, but it allows a degree of control that is more difficult to manage with some of the other methods.

When done right, it can also produce some stunningly beautiful imagery – as is the case here with Missing Link.  There is a brief scene during the credits that shows how this process works in producing just a few seconds of movie magic.  But because the figures are actually three-dimensional objects, and not drawings on paper (or on a pixelated screen) the three-dimensional effects are real – the shadows cast by the figures are real shadows and the light bending around their faces is actually shining on them.  And these effects are the best thing about Missing Link.  One of the best, and most complicated, stop-motion scenes ever is the barroom fight scene. In fact, if you have any liking at all for this animation technique, then this scene, alone, is a reason to see this movie – the stop-motion animation is exceptional.

The appreciation for the technique is most intense in the created environments that the characters inhabit.  Some of this is green-screen, CGI fill-in, but much of the closer-in backgrounds were actually created on a live, miniature set and the level of detail in the artwork here is just stunning.  Because the story actually takes place in multiple locales around the world, there are many different kinds of scenery to illustrate the art work.  Whether it is the detailed evergreen needles in the forests of Washington, or the water-starved cracks in the dirt of desert New Mexico, the swells of an ocean, or the ice-crevices dotting the jagged mountains of the Himalayas, the most exciting imagery for me were the miniature sets.  Ben Kenigsberg (The New York Times) wrote that “…the sculpting gives the characters a tactility that lines of coding have not yet matched, and the jerkiness of the movement affords the film a warm, organic feel.”  The rich color palette and the textured feel of each surface indicates just how long, and expensive, the filming process was for this film.

Missing Link comes to us from Chris Butler who wrote and directed this movie along with ParaNorman, for which he received another Oscar nomination.  Butler is with Laika Studios, out of Portland, Oregon, which is also responsible for Kubo and the Two Strings – two Oscar nominations – and Coraline, one of my all time favorite animated movies and yet another Oscar nominee.  In other words, there is a lot of talent behind this production.  (It also helps that they threw an estimated $100 million into making this movie).   Visually, this is a movie well worth watching.

And yet, it didn’t do so well with either audiences or the critics.  Of our 38 movies this year, Missing Link was third from the bottom in audience rankings.  Critical reviews were a little more charitable, but still, it fell in the bottom third of their average ranking.  Hard-core feminists, like MaryAnn Johanson (Flick Filosopher) found its ‘…cartoonishly awful protagonist, a plot that makes no sense, lowbrow humor, and terrible gender dynamics add up to a unpleasant retro mess.”

I’m not sure I would go quite that far.  Yes, the story-line is simple but would be entirely appropriate for a family outing.  And while the moral takeaway (that we can be friends with all kinds of ‘people’) might provoke a slight gag reflex among jaded adults, there is some interesting word-play between Sir Lionel Frost (a proper British adventurer) and Mr. Link (a Sasquatch who can read and write, but takes things quite literally).  Hugh Jackman voices Frost and Zack Galifianakis is Mr. Link.  When Adelina Fortnight (Zoe Saldana) joins the adventure, she adds enough intelligence to save the day (but not enough maybe to make the movie’s misogyny tolerable).

But, hey, we don’t have to take everything seriously.  The movie is a diversion with something for everyone – and a good time with the kids. (Just a solid 2.5 stars.)